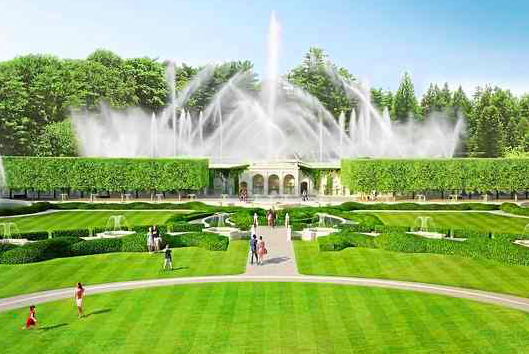 A multimillion project in the works at Longwood Gardens in Kennett Square will "blow your mind" when it opens next May, president and CEO Paul Redman recently said of the New Heights Main Garden Fountain.

In an interview with The Daily Local, Redman touted plans for the $90 million centerpiece of the popular destination in Chester County.

“We’re in the home stretch now,” said Redman. “It’s starting to look like a complete garden. The old fountain garden was beautiful and lovely, but what you will see when we are done will just blow your mind. With the new color palette, we will have millions of colors of lights. Just imagine water dancing.”

Designed by Beyer Blinder Belle, West 8 and Fluidity Design Consulates, the Main Garden Fountain is modeled on the original vision of American entreprenuer and conservationist Pierre S. du Pont, who opened his luxurious estate to the public.

Renovations at the 5-acre site include enhancements to the landscape and horticultural displays, an expanded set of walkways and the addition of LED lights that will enliven a colorful aquatic choreography for guests.

“I can promise you we will have some really big parties," Redman told The Daily Local.

More than 50 percent of the renovation is situated underground, where engineers are working with 9,000 cubic yards of concrete, 1,400 feet of linear tunnels and 51 tons of copper wire to construct a new hydraulic fountain system with three separate reservoirs and four pump rooms. A total of 338,570 gallons of water will be held in underground storage tanks that flow through five miles of fountain pipes, with 1,719 jets and streams powered by 68 pumps.

A timelapse video of construction at the site, led by Urban Engineers and Bancroft Construction, can be viewed below.

The massive project, announced in 2014, will serve as a follow-up to Longwood Gardens' wildly successful Nightscape show, a brilliant display of color that has drawn sellout crowds for the past two years. Redman said that while Nightscape will not return in 2017, many of its technologies will be deployed at other displays. Lighting for the Main Garden Fountain will be handled by L'Observatoire International. Redman said choreographers at a work on a variety of light shows.

No public funding was secured to finance the ambitious project, whose investments have come directly from the New Heights Fountain Revitalization Project.

Additional features of the renovation will include a trellis bridge connecting to the Fountain Terrace, a new Pump House lobby with historical displays, a reopened south wall with 20 fountains and new seating areas for visitors.

An interactive website with detailed views and descriptions of the project can be accessed here.