Get Gardening: Everything you need to know to become the ultimate urban gardener 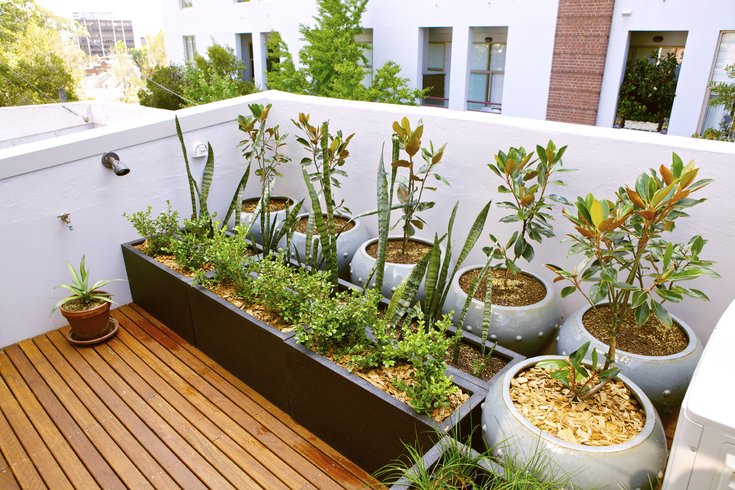 A good way to begin gardening is to remind yourself that no place is too small to grow.

Rinna Hoffman has turned her roof deck in Bella Vista into a kind of Eden. Filled with large planted containers, trees and even bees buzzing around, the 33-year-old has come up with a solution for not only spatial challenges that can sometimes accompany city life, but also upkeep way up on the roof.

“Every year I add some new stuff,” she says, “so it’s constantly growing. I have four citrus trees that I move outside when it gets warm enough, and a grape vine that I hope survived last winter. One cool thing I have is a mason bee house. Mason bees are really good pollinators, so it is good to try to attract them and keep the ones I do have happy.” (Learn how to build your own bee house).
“I also have a pulley system off the side of the house that I use to bring stuff up to the roof that I don’t want to drag through the whole house (like compost),” she says. A system like hers is the ultimate DIY weekend project (here’s a step-by-step guide to building one).
Having grown up getting her hands dirty in gardens since she was a kid, Hoffman’s always had a garden. But after moving to the city, she wanted to focus on growing food to eat with flowers and plants that would add to the experience. “I'm trying to make the whole thing a little more aesthetically pleasing as I go on instead of just utilitarian,” she says, “so I've started building some trellises and upgrading the planters as the years go by. I also try to use recycled materials as much as I can.”
Hoffman has a trellis made from an old screen door and one that used to be a bunk-bed ladder. Her garden is also completely organic – she makes her own compost. “I usually grow at least three different types of tomatoes, a couple of pepper varieties, eggplant, radishes, carrots and some sort of lettuce,” she says. “This year I also planted a lot of beans and peas.”

How to get started

A good way to begin gardening is to remind yourself that no place is too small to grow. Herbs, for example, can be easy to tend to on a windowsill and ultimately add flavor to meals (here’s how to build a kitchen herb garden).
“It takes some self control not to plant everything you want,” admits Hoffman, who suggests making sure you understand how big your plants will get so you don’t crowd them. One way to do this is to start with seeds. Hoffman gets hers from Seed Savers Exchange or Baker Creek Heirloom Seed Company. They can also be found closer to home through the Philadelphia Seed Exchange and at Terrain in Glen Mills, where you can also find stylish zinc sphere hanging baskets and cool, colorful hoses.
Bulbs, as well as starter plants and flowers are also available (along with some great urban gardening advice) at Greensgrow, with two locations in Kensington and West Philly. This spring, Greensgrow has everything you need to get gardening – from seeds, fruit trees and bushes to annuals, perennials, container plantings and natives. Greensgrow even offers a line of veggie starts with insights into vertical gardening, which can save space and add to decor in urban environments.
Another great option for city dwellers is container gardening, which can be ideal for a roof deck or patio. Some local gardeners build their own containers from recycled materials, like old metal drums, while others opt for lightweight planters that can be easily moved. The only challenge can sometimes be maintaining moisture, especially during the hottest days in summer. One way to ensure that greenery doesn’t dry up on a rooftop container garden, for example, is by using a drip irrigation system that not only saves water but also makes it easier to care for a garden even when you’re vacationing.
To build your own irrigation system (like this guy on YouTube), all you need is some PVC piping, a hose, access to water and a little ingenuity.
Unlike water, however, bees can be harder to come by in the city, so things like squash and cucumbers are harder to grow because they have separate male and female flowers and depend on outside forces to pollinate them. A good rule of green thumb is to either plant a lot of flowers to encourage pollinating of other vegetables, or get ready to do some, well, manual pollination. The key to any successful gardening project is to be passionate about it. Grow what you love to look at, smell or eat.

Ever since he found an old Philadelphia recipe book at a yard sale, Jason Bartlett has been obsessed with the fish pepper. “I had never heard of a fish pepper,” says the 40-year-old from East Passyunk. It turns out the fish pepper has a long history in Philly with deep roots in the African-American culinary culture that predates the 1870s.
“They were the preferred pepper for our famous Philly pepper hash,” says Bartlett, “and they can’t be beat in white sauces for a little heat.”
Believed to have arrived in Philadelphia by way of the Caribbean, they became very popular among African-American communities, and were often the secret ingredient in recipes for creamy white sauces atop shellfish in the city’s famous oyster houses. Turns out these resilient little peppers still thrive really well here because, believe it or not, most seeds that exist today came from seeds from a black folk painter in West Chester by the name of Horace Pippin in the 1940s. He swore that the peppers helped cure arthritis and soothed bee stings. They also have plenty of flavor.
“They are really tasty and range from sweetly to mildly hot to citrusy spicy,” says Bartlett, who grows his fish peppers in containers; he used to grow them on a metal staircase when he lived at 12th and Montrose, and the neighbors would line up for them. “We make a hot sauce every year with them. We use them throughout the summer in our food.”

To get a sense of what other urban gardeners are growing (and to find out some secrets for dealing with everything from weather to pests), check out local community gardens and do some research online. “I once bought 500 live ladybugs from Amazon.com to control the aphid population,” says Hoffman. “The big box stores are always there for soil and random supplies. I also get some of my flowers there, especially for our window boxes because my wife doesn't like to wait for flower seeds to sprout.”
Some of the country’s oldest botanical gardens – like Bartram’s and the Wyck House – also offer historic inspiration when it comes to growing both plants and vegetables, while independent shops like Urban Jungle Florist on East Passyunk can help shape a garden’s overall design. The pros here are experts in building vertical green walls, space saving gardening features that also provides natural air purification indoors and outdoors (an example can be seen on the façade of Avance). This is also a great place to pick up decorative touches, like small water fountains and seating.
And at City Planter in Northern Liberties, check out the hanging terrariums and Zen garden accessories – like sleek modern planters and resin window boxes. An urban gardener can create just about any mood in a garden that’s small or large – from a bit of country wilds to a modern, streamlined green space on the roof, patio or windowsill.
“It’s fun to be in the city,” says Hoffman, “but having an out-of-the-city feel in the garden is definitely a stress reducer when everything else is hectic. It kind of reminds me of my early childhood when we had a huge garden and I loved it. It’s such an escape.”