The Anchor Men, a new group featuring Luke Taylor, want to sing shanties at festivals and on cruise ships — once COVID passes 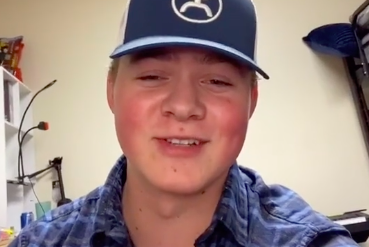 There is a large and loyal following of sea shanty enthusiasts in the depths of TikTok.

One of the top trendsetters in so-called "ShantyTok" is a deep-voiced Delaware County teenager.

Luke Taylor, a Garnet Valley High graduate, has more than 920,000 followers on the video-sharing social media platform. He's known for adding bass lines to other singers' shanties, a form known as "dueting." His videos have gained more than 9.5 million likes.

Sea shanties are a type of sailor folk song focused on treasure, pirates, mermaids and rum. They can be traced back to the 1400s but are getting newfound fame, thanks to TikTok.

Taylor is among a group hoping to bring sea shanties to a live audience — once it's safe to do so. He recently teamed up with five other shanty creators to form the virtual singing group "The Anchor Men."

Michael Quinn founded the group under his production company, Ginger Quiff Media, after seeing Taylor's success on the app. He envisions The Anchor Men playing live concerts or festivals full of whiskey, pirate cosplayers and sea shanties — or maybe they'll even take the show to the high seas on cruise ships once the threat of COVID-19 subsides.

"I think that's the most important thing for me, that when we do get back to the real world, there's that joyous feeling of being all together again, and I think that's what this can bring," Quinn said.

He got his start on TikTok months ago after he missed performing in his school's choir. He said he mostly set out to sing country songs, but one day he heard Scottish singer Nathan Evans perform the shanty "Soon May the Wellerman Come" and thought it needed a little bass, PhillyMag reported.

He used TikTok's duet feature to harmonize with Evans's song and the video went viral — it was viewed more than 6 million times, Forbes reported.

The song became so popular that it soared onto the top 10 on the United Kingdom's Official Singles Chart. Evans signed a record deal with Polydor Records.

Taylor, Evans and four other collaborators also teamed up to record a single of "Wellerman" to raise money for the UK-based Marine Conservation Society.

Sea shanty singers around the world use the duet feature to sync up to each other's videos and harmonize their vocals to create a choir of singers from miles away.

After his first dose of fame, Taylor started posting more videos of himself singing shanties for a band of loyal followers, earning him a top spot in the trend.

Evans echoed those sentiments, saying the songs give people much-needed hope and unity during the pandemic.

"Everybody is stuck at home, is down, feeling sad, and the song and TikTok, and all these people joining, brings a sense of happiness, fun, friendship, unity," Evans told Forbes. "It lifts everybody's morale and everybody's mood, stomping their feet, clapping their hands. It's a modernized sea shanty: it worked back then, it works now."