If the weather cooperates, this celestial event will be viewable throughout the Philadelphia region 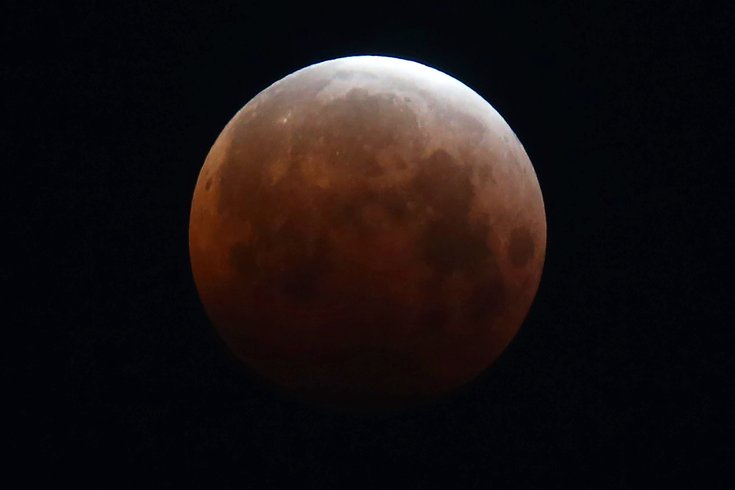 A partial lunar eclipse of the Beaver Moon happens in the early morning of Friday, Nov, 19, 2021. The eclipse, viewable from the Philly region, will make the moon appear red or brown due to the rays of light from the sun bending around the curvature of the Earth as they pass through the atmosphere.

The longest, partial, lunar eclipse since one that occurred 50 years before Christopher Columbus set sail takes place early Friday morning, and stargazers across the Philadelphia region will be able to see the entire astronomical event, if the weather cooperates.

The eclipse commences at 2:18 a.m. Friday when the full moon – November's full moon is called the Beaver Moon – enters the umbra, or darkest region of the shadow cast by the Earth.

The moon will appear dark red or brown at the maximum eclipse, making it very visible. This color change happens because the light that reaches the moon has bent around the curvature of the Earth after passing through the this planet's atmosphere. The shorter-wavelength blue light is filtered out by the atmosphere leaving red and orange color wavelengths to reflect off the moon's surface.

The Holcomb Observatory in Indiana tweeted out a diagram that explains well what will be happening in the sky Friday morning.

LONGEST PARTIAL ECLIPSE of the CENTURY to occur in the Pre-dawn hours of November 19th. Maximum eclipse is at 4:03 AM EST when 97% of the Moon will be eclipsed. At that time it will be high in our western sky. This will also be the longest partial lunar eclipse in 580 years! pic.twitter.com/Xa9ciXLp3V

No special equipment is needed to view the eclipse, and unlike a solar eclipse, which can damage observers' eyes if viewed directly, the lunar eclipse does not pose such a risk. Skywatchers should be aware that it can take 20 to 30 minutes for a person's eyes to adjust to the darkness, and the moon will not be as easy to see when it is further away from Earth's shadow.

Binoculars or a small telescope can, be used to enhance the view. Light pollution, which is abundant in Philadelphia and the nearest suburbs, is not expected to be an issue when viewing the moon.

Venus, Jupiter and Saturn are expected to be visible in the sky on Friday morning, too, and people who stay out late enough should be able to see Mars rise in the morning.

In the Philadelphia region, the weather could impact people's ability to see the partial lunar eclipse of the Beaver Moon. The National Weather Services's forecast for the city is predicting rain until about 1 a.m. Friday along with the potential for lingering clouds. The NWS regularly updates its Philadelphia forecast on its forecast page.

If cloudy skies and rain prevent a good view or you're just not interested in going outside, the Virtual Telescope Project and Time and Date will each have live broadcasts of the spectacle available to stream online.

November's lunar eclipse is the last of the year. The most recent one occurred in May, and the next will happen between May 15-16 next year.