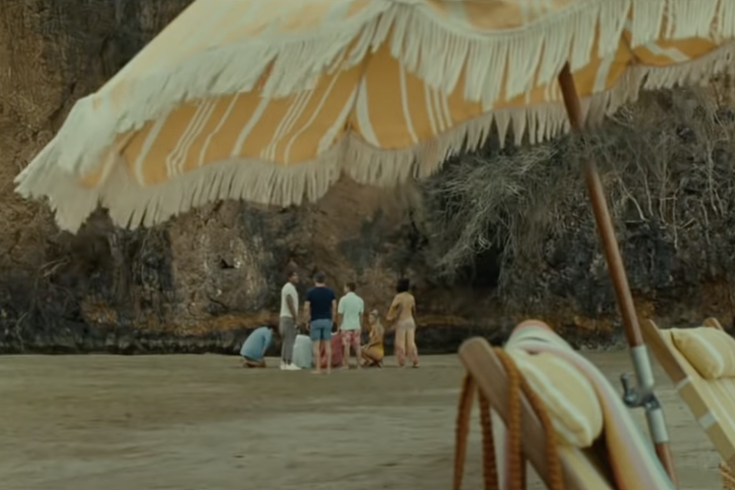 M. Night Shyamalan's next movie, 'Old,' follows the frightening mystery of a beach that makes its visitors rapidly advance in age. The movie is set to premiere in theaters on July 23.

Americans are increasingly returning to movie theaters this summer as COVID-19 vaccination rates climb and mask mandates are lifted across the country. Memorial Day weekend saw box office receipts top $100 million for the first time since early 2020, powered by the release of "A Quiet Place Part II" and "Walt Disney's Cruella."

The communal experience at the theater may be in for something unique in late July, when M. Night Shyamalan's much-anticipated feature film "Old" is set for theatrical release.

At the Tribeca Film Festival — the first in-person movie festival in the U.S. since early 2020 — Shyamalan said "Old" will offer moviegoers something they've never seen before.

"No one has ever seen anything like it — in its tone and the way it's just, I mean, it's like nothing else," Shyamalan said, via The Hollywood Reporter.

"Old" is based on Frederik Peeters and Pierre Oscar Lévy’s graphic novel "Sandcastle," which examines a family's harrowing beach vacation at a mysterious place that rapidly advances aging. A trailer released during the Super Bowl earlier this year gave glimpses of what the concept looks like on-screen, but the full trailer released at the beginning of June spells the concept out more explicitly.

The film's cast is led by Vicky Krieps, Alex Wolff, Gael Garcia Bernal, Eliza Scanlen and Thomasin McKenzie. Based on the trailer, it would seem that the characters' self-perception and age aren't always consistent with their bodies, which presents an interesting contrast as the group on the beach works to understand the mystery of their predicament.

Shyamalan, who grew up in Lower Merion and now resides in Chester County, explained that he was inspired to write "Old" by the changes in his personal life. From watching his father suffer from dementia to celebrating the accomplishments of his young adult daughters, he found material to explore in the pains of aging.

"Old" was filmed at a beach in the Dominican Republic, where Shyamalan's cast and crew managed to complete production without anyone involved in the project contracting COVID-19. The biggest threat during the making of "Old" was hurricanes and beach erosion.

One storm destroyed the set, forcing the film's crew to delay filming and rebuild it.

"We got very lucky. By day one, part of the beach came back, so we shot on that side and then we became very versed with nature, like the tides and storms out 100 miles away and how many times the water comes up per day," Shyamalan said. "Honestly, we were allowed to be on that beach. That was Mother Nature allowing us to be there. We had 40, I don't know, 40 days where we needed good weather—we got 40 days of good weather."

"Old" will be Shyamalan's first feature film since 2019's "Glass," which completed a trilogy with "Unbreakable" and "Split." The film is slated for release on July 23.