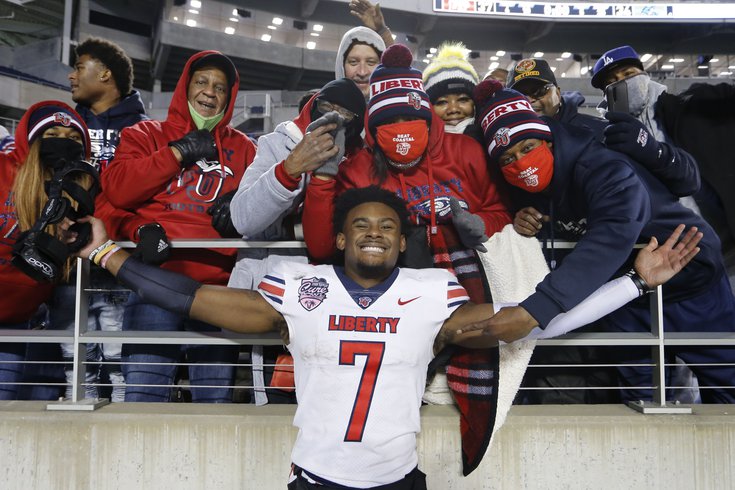 Question from Philadelphia Botanists: How would you rank the options for the Eagles' starting QB in 2022:

B. 1st round rookie

D. Hurts weathering the storm until rookie is ready

I think the most likely outcome is that the Eagles draft a quarterback in the first round. Why? Because I don't think guys like Aaron Rodgers or Russell Wilson are going to want any part of coming to Philadelphia to play for the Eagles, and that's kind of an integral component of trading for them.

The two most likely Eagles first-round quarterbacks, in my opinion, are Ole Miss' Matt Corral and Liberty's Malik Willis.

Question from RKotite: Could Gardner Minshew be a guy that could be a franchise QB, thus allowing you to use the first round picks on someone other than a QB? Or is he viewed strictly as a backup in your mind?

Relative to other starting quarterbacks around the NFL, Minshew is short, he's not particularly athletic, and he doesn't have great arm talent. The lack of those physical traits are always going to inhibit his chances of being a starting quarterback.

What he does have is good accuracy and intangibles, and he can win you some games if you need him to step in for a starter if need be. He's strictly a backup, in my opinion, or perhaps better stated, if he's your starter, you're going to be looking for a more talented quarterback.

Question from Bill: Overall thoughts on DeVonta Smith and Landon Dickerson so far?

Smith is third among rookies in receiving yards so far this season.

Smith is on pace for 78 catches for 986 yards and 2 TDs, or 73-928-2 in a 16-game season. Those are good numbers for a rookie, and would in fact break the Eagles' team record for rookie receiving yards, currently held by DeSean Jackson (912).

On the one hand, Smith is perhaps getting more targets than your average rookie because the other options around him aren't very good. For example, Rondale Moore's targets are going to be limited in an offense that also has DeAndre Hopkins, A.J. Green, and Christian Kirk. On the other hand, Smith is also getting more attention from opposing defensive backs, because of the lack of a good supporting wide receiver cast.

When you factor in that Jalen Hurts often hasn't been accurate when throwing him the ball, and that the offensive scheme isn't doing anyone any favors, I think Smith's rookie season has been fine so far for where he was drafted.

At a minimum, there are no "should have drafted DK Metcalf / Justin Jefferson" arguments to be made.

As for Dickerson, I haven't zeroed in on him specifically yet, but anecdotally he's been shaky in pass protection. Opportunities to move defensive linemen against their will in the run game have been few and far between, of course, since the Eagles don't try to do that. I don't think it would have been reasonable to expect him to look like an All-Pro out of the gate, given that (a) he was recovering from a torn ACL, and (b) he didn't even have a training camp his rookie season.

Question from Hews: Any chance for a full report card on the GM? Sure, he has made some good trades (some after very bad signings), but I don't regard his cap management as highly as others. Super Bowls aren't a fluke, but it has been very clear for some time a significant rebuild is needed, and it just hasn't happened.

Question from DB: The Eagles are awful, but will still finish 2nd in the division. How putrid is the NFC East?

Are we sure they'll even finish second? Technically, right now, they're in third, since Washington is 1-0 in the division.

The division as a whole isn't as bad as it was last year, since the Cowboys are a legitimately good team, but the Eagles, Giants, and Football Team are all very clearly bottom 10 teams right now.

Question from Rawg: I heard some rumblings a game or two ago that Sirianni might need to give up play calling. The more they lose, the more likely he will be one and done, but in a world where he does give up play calling, why bother keeping him? I never saw the benefit of having a HC who doesn't call plays. Like, how much value does that guy bring?

There are field general coaches who don't call plays who have been very successful, like John Harbaugh and Mike Tomlin. I don't view Sirianni and his flower metaphors in the same way as guys like Tomlin.

In order to keep his job, in my opinion, he has to show this season that he can formulate creative game plans, and then execute them on Sundays. And for that reason, there's pretty much a zero percent chance he's volunteering to give up play calling duties. It's just not going to happen. If he did, he'd be toast, because as you note, what would be his value otherwise?

Question from Hinkie: If Sirianni is one and done, they HAVE to clean house right? Like they can't let Howie pick a FOURTH coach? Can they? Please tell me they can't.

Only one current GM in the NFL has been in place for three head coaching hires. That would be the Cardinals' Steve Keim, who started in 2013 at the same time as Bruce Arians. And Arians retired, as opposed to being fired.

I think that more importantly than getting to hire a fourth head coach is that if Sirianni is gone and Roseman survives, it will be the fourth coached fired since 2010, when he first became the team's general manager. That would be unprecedented.

Question from Chet: $2.4 million cap hit for Flacco next year? What an awful signing.

Yep. Even with the acquisition of (likely) a late sixth-round pick for trading him, it's a contract that never made any sense whatsoever for this team, and it was made worse by the way it was structured, leaving the cap hit with the Eagles after his departure. Just a completely nonsensical signing.