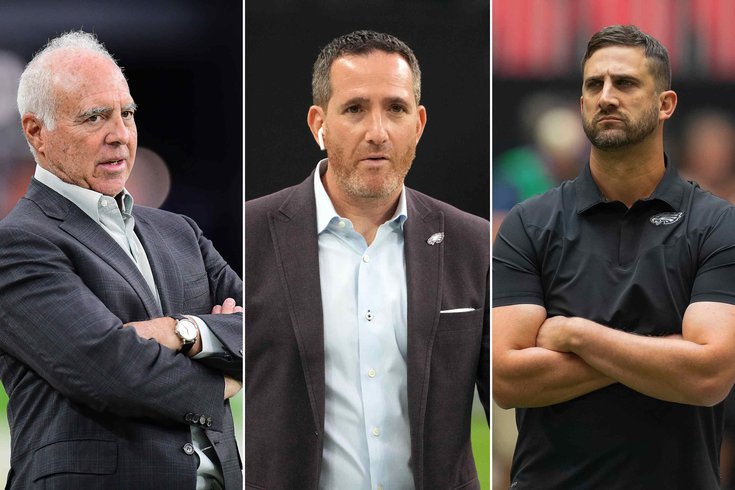 Are they doing this….on purpose?

I’m sorry, but I simply don’t believe you haven’t asked yourself this question over the past few weeks. Anyone who sat down and watched how unprepared and unable to adjust the Philadelphia Eagles were surely asked themself this question. You may have asked it to your friend, co-worker, partner, or child. Maybe you called up a radio station or tweeted your favorite beat writer, but you most certainly came to this conclusion.

Who would fault you? The Eagles have been so bad on the field, so inept on offense, so self-destructive on defense that the only plausible solution is they are tanking for draft picks. This isn’t any Sam Hinkie tank — it’s far less blatant and way craftier. Be prepared to enter the “Not So Much of a Conspiracy Now” zone, where Jeff Lurie and Howie Roseman look competent in drawing up this elaborate scheme.

Just because you don’t like the team tanking for two – possibly three – first-round draft picks, that doesn’t mean it isn’t working. You also may not like the idea that this team is even tanking in the first place, but again, that doesn’t mean it’s not happening in front of your eyes. Or being done incredibly well.

This past week left me with little else after they opened with a fantastic game plan against the Raiders, then promptly abandoned it (and the game as a result). It was like watching a jockey in the lead pull up on his horse, only to finish in 5th place. Again, I ask you, how else can you explain this outright display of incompetence?

The highest paid player on the team – the franchise of the defense – is calling out the coordinator. The head coach is going so far to neglect the running back position that he’s asking the QB to lead the team in rushing. Jalen Hurts is left to fend for himself as his head coach throws up his hands blaming the RPOs not being properly executed. The first-round pick playing at an absurdly low level – partly because his QB can’t throw him open and partly because the head coach (former receiver and receivers coach himself) can’t scheme him open. Quez Watkins should be leading the NFL in YPC. Have the even heard of a linebacker? It's an organizational failure. The Owner. Roseman. All of them.

Unless of course this was the plan all along.

Either way, it’s all culminating with one of the worst looking teams we have seen on the field in years. People – myself included — gleefully take the bait and attack the players and coaches. But you must appreciate the genius in the scheme. As soon as I saw this for what it’s worth, I had to hit Howie with the Denzel GIF.

So how did it all go down?

Let's go back to the beginning...

The Eagles drafted an insurance plan in Hurts because Carson Wentz couldn’t stay healthy. All the drama after Hurts was drafted was never planned, but it was something they took full advantage of when it happened. They put Wentz on the trade block and waited for the best possible return. Then it was all about moving on from coach and coordinators, which wasn't difficult because both Doug Pederson and Jim Schwartz had it with the dysfunction. Roseman and Lurie aren’t dumb, they recognized it and brought a whole new regime, one they could more easily control. Then the trade with the Dolphins at the draft, meaning both Miami and Indy could help this Eagles team. It was the insurance needed in case Hurts got lucky. Not lucky in his playing well, but lucky in playing well despite all that’s around him.

Fast forward to Week 8. We’ve seen a new head coach lack any true feel of the game, no ability to help the young QB grow from mistakes. After seeing a glimpse of it with the benefit of hindsight, it’s like the Eagles wanted to give Hurts a shot while ensuring he would fail. Because the team must fail. It’s the only way to ensure the possibility of three top-10 draft picks.

The owner and GM are smart men. They are more in-tune with the sports climate in this city than any other front office or politician. They knew that bringing in anyone with a resume or credibility in growing a QB might backfire their plan of losing a bunch of games. They also knew that all of this can be conveniently hidden under the rug of inexperience.

And the fans are left being held hostage this year, not knowing what the hell will happen moving forward. The Eagles could use those picks on linemen or trade them for a QB. Nick Sirianni could be a ghost next year or back for another try. It’s what drives the conversation of why this isn’t a tank, because they can all grow and learn and blah, blah, blah.

The reality is the Eagles made sure they will be drafting in the top-10, by putting out a totally unqualified coaching staff.

Conspiracy theories always start somewhere and sometimes we look back and find them to be right. The Eagles overall ineptitude is shocking. It has a lot of people thinking just how bad this can get, and if this is all being done to lock up higher draft picks. Just ask around.

The Bengals come off one of their biggest wins in recent years, handing Lamar Jackson an L for the first time since he came into the league. This is a week-to-week league with plenty of letdowns from prior games. This is the exact spot we see teams take opponents lightly and get caught sleeping. The Jets are coming off a humiliating blowout loss to the Patriots in which they lost Zach Wilson. But the change to Joe Flacco or Mike White isn’t anywhere near a significant drop – if at all. Don’t expect the Jets to look lost and their defense still plays hard. Jets can cover this number.