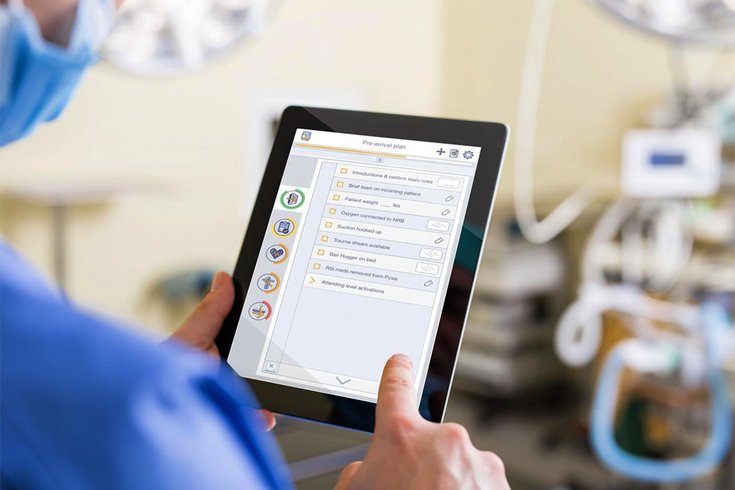 Checklists are a doctor's best friend.

In trauma centers, they can help them make life-or-death decisions without delay in a hospital environment where seconds are vital in the effort to save lives.

A 2013 Johns Hopkins study showed that use of a checklist – with reminders about effective hand-washing, instrument sterilization and anti-contamination methods – dramatically cut infection rates during common intravenous insertion procedures in intensive care units. The simple lists have become a mainstay of medical care.

Now researchers at Drexel University are working on developing and implementing the first digital procedural checklist for trauma centers, the institution announced Monday.

Two Drexel researchers recently presented a paper at the international Conference on Human Factors in Computing Systems in Scotland on "nearly a decade of research, design, development and testing that produced the first tablet-based digital checklist for trauma centers."

Leah Kulp, a Ph.D. candidate, and Aleksandra Sarcevic, Ph.D., an associate professor, both in Drexel's College of Computing & Informatics, shared their conclusion that a digital checklist can help doctors without causing any delay in the trauma resuscitation process.

"While it might seem intuitive that intense and dynamic setting of a trauma center could benefit from having a cognitive aid and a better way to record everything that's going on, introducing new technology can actually be a setback at first - and that's something doctors in trauma centers just can't afford," Sarcevic said in a news release. "Finding that our digital checklist did not have an adverse effect on the trauma teams' performance is an important indicator of success for our process of design and implementation."

The Philadelphia team worked with doctors from the Children's National Medical Center in Washington, D.C. Sarcevic first participated in the development of the checklist in paper form alongside Dr. Randall Burd, a co-author, and his collaborators at Children's National. After nearly a year of revisions, the digital checklist included some 55 tasks, from steps to prepare for the arrival of a patient to standard observations and checking vital signs to more advanced examinations and tests.

Using findings from testing of the paper checklist, Sarcevic's team focused on the most crucial tests and procedures, sequencing them in an intuitive order while accounting for the important eccentricities that pop up while using the checklist.

The checklist went through 10 major design updates before it was finalized for full-scale testing.

"It was exciting to see our work being used in real trauma settings and to get input from the team leaders who were the first ones to use it," Kulp said. "Listening to the doctors and understanding how they used the list both to take notes and to keep things in order really helped us to make informed design changes over time."