Map: States pay higher than national average for these jobs 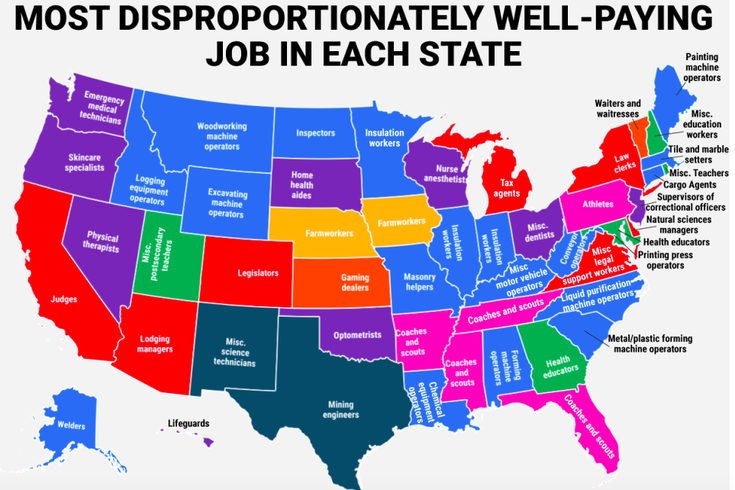 Data from Bureau of Labor Statistics.

Throughout the course of American history, pivotal events and discoveries have led to an influx of laborers rushing to capitalize on hot markets. The California gold rush is a prime example, as is the rise of auto manufacturers in Detroit or, more recently, the oil boom in North Dakota and the profusion of technology in Silicon Valley.

In today's U.S. labor market, where greater flexibility has accompanied the dwindling of certain industrial legacies, skills are still just one part of the equation when it comes to earning potential. Depending on your level of training and expertise, some states show a tendency to pay a lot more for a given profession than other parts of the country.

Using salary data from the Bureau of Labor Statistics, Business Insider published a map showing exactly which occupations each state pays above the national average to attract and keep talent. They note that while median salary is usually a better indicator for aggregation than mean salary, the BLS doesn't report that data, so the map reflects averages. 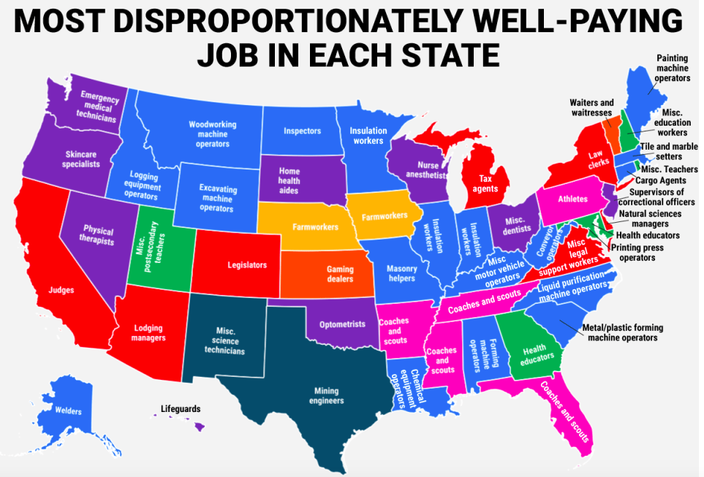 Data from Bureau of Labor Statistics.

Some of the results here are fairly predictable according to the basics of supply and demand. The abundance of mineral resources in Texas – and its proximity to the Gulf of Mexico – dictates that a premium would be placed on skilled mining engineers (they pay 42 percent more for them). Hawaii, a series of islands, would naturally need great lifeguards (they pay 73 percent more for them).

Elsewhere, the trends are not as readily apparent. In Pennsylvania, professional athletes at every level average 66 percent higher salaries than the rest of the nation. If you're Sam Bradford and you want to stay in Philadelphia, this is a pretty convenient negotiating point.

Other standouts include Maryland, where health educators benefit from the presence of Johns Hopkins as the state's largest private employer, and California, where an abundance of jurisdictions means the state needs more judges.

While it would be easy to jump to hasty conclusions about such data without considering the rest of the labor markets in each state, the map serves as a useful reminder that geography and institutional history can play a huge role in the prominence and earning potential of certain sectors of the economy.