Map: Words people in each state can't spell for their lives 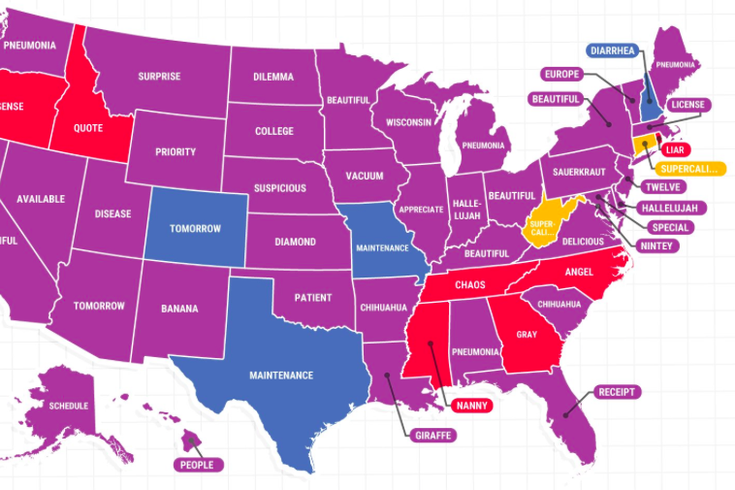 Google is here to help guide us through some of life's biggest quandaries, such as why your head feels like it's about to explode, where to find a local business and how to ace an interview.

In the aggregate, Google can also tell us a lot about who we are — the good, the bad and the ugly. This week is special because festivities for the Scripps National Spelling Bee are officially underway. It's a time when schoolchildren put your autocorrect-dependency to shame and generally furnish the internet with at least a few good meltdowns.

Everyone has a word or two they can't seem to spell — misspelled is a good one — but Google Trends took it a step further by generating a map of each state's most frequently misspelled words, based on "how to spell" searches. It's not pretty.

We'll note first that "sauerkraut" is a pretty reasonable word for Pennsylvanians to struggle with, both inside and outside of Dutch country. As a German loanword with funky vowels, we could do a lot worse for our spelling woes.

New Jersey, on the other hand, has evidently no concept of sounding things out phonetically. Assuming you're over the age of 12, how do you not figure out how to spell the word "twelve"?

Other highlights include South Dakota getting tripped up on "college," Mississippi having a tough time with "nanny," and Wisconsin hitting a wall with "Wisconsin."

Twitter, of course, was quick to point out that even Google initially misspelled the word "ninety" on its map of misspelled words. Happens to the best of us.