The complete streets project will extend from 20th to 23rd streets. Painted bike lanes also will be added between 30th and 34th streets. 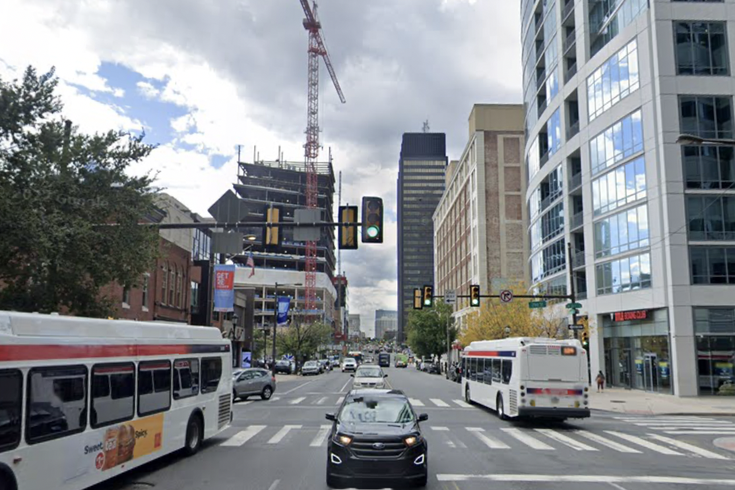 PennDOT is working on a series street repaving and traffic reconfiguration projects along Market Street in Center City. A two-way, parking-separated bike lane will be added to the stretch between 20th and 23rd streets.

Construction is underway on a series of roadway and traffic safety improvements that PennDOT will implement along Market Street in the months ahead.

The complete street safety projects cover stretches of Market Street from from 15th to 20th streets, 20th to 23rd Streets, and 30th to 34th Streets. These areas all appear on the city's Vision Zero High Injury Network, meaning they are among the 12% of Philadelphia streets accounting for 80% of serious and fatal traffic crashes.

On Tuesday, the city provided an update to the plans on Market Street between 20th and 23rd streets, where officials said PennDOT will create a two-way, parking-separated bike lane on the northbound side of the street. Here's how the layout for the reconfigured stretch will look once it's completed. 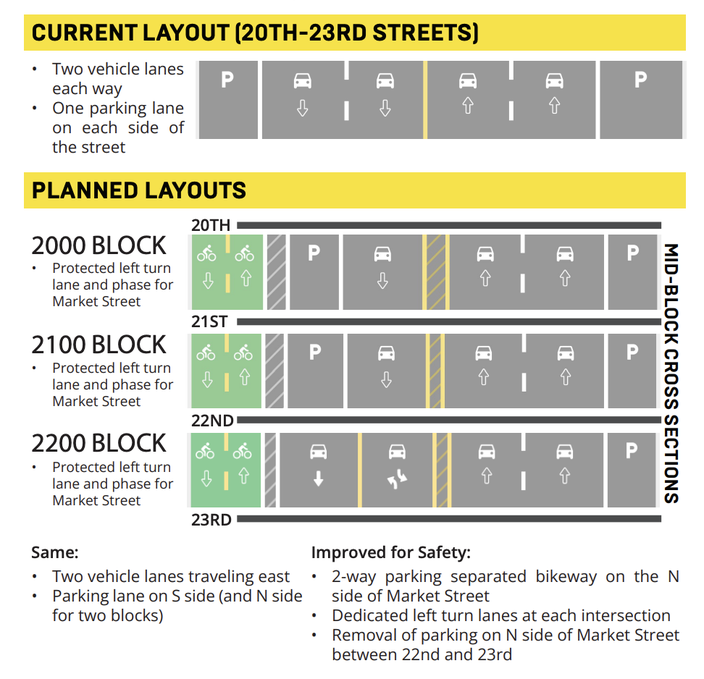 The layout of Market Street between 20th and 23rd streets will be changed by PennDOT, as shown above, to improve traffic safety.

The full project will include the following adjustments:

• Changes to the layout of the road to control driver speeds throughout the corridor
• Safety improvements for motorists making left turns from Market Street,
• Safety improvements for pedestrians at intersections and the addition of a two-way bike lane on the north side of Market Street.
• Elimination of one westbound car lane and some parking spots on three blocks.

Over the past five years, there have been 72 crashes on these three blocks with 46 people injured and five people seriously injured, city officials said. Among those who were hurt, 60% were walking and 20% were biking.

To complete the new layout, PennDOT will need to make traffic signal modifications at the Market Street intersections with 23rd, 22nd, 21st and 20th streets. These changes are expected to be finished by spring 2023.

Until the traffic signals have been upgraded, the bike lane will be temporarily closed using barriers, with signs posted on the street explaining the project.

The modifications to these streets also will entail changes for SEPTA buses, which currently stop in both directions at 23rd, 22nd and and 21st streets. Buses traveling east stop at 20th street. PennDOT's project will result in the following changes for buses:

A parking-separated bike lane was added to the north side of Market Street between 15th and 20th streets in 2018, leaving three lanes for vehicular traffic. This layout resulted in driver speeds decreasing by an average of 9%. There also has been a 15% decrease in crashes along this stretch. As part of the this latest work, that stretch of Market Street is being repaved and the bike lane will be reinstalled.

Between 30th and 34th streets, PennDOT will add painted bike lanes on each side of the street. Currently, Market Street has bike lanes running from 63rd Street to 34th Street. The goal of extending these lanes is to facilitate travel to residential and employment hubs around 30th Street Station and University City.