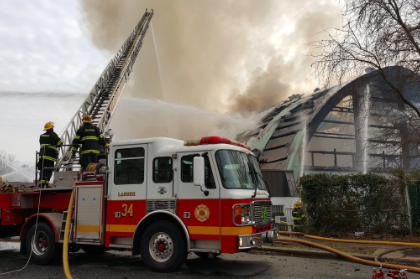 Four-alarm fire at Aquatic and Fitness Center in Northeast Philadelphia on March 6, 2017.

A four-alarm fire at a large fitness facility in Northeast Philadelphia on Monday prompted officials to issue a shelter in place order to neighborhood residents in the vicinity of the dangerous blaze.

Firefighters responded to the Aquatic & Fitness Center, located at 3600 Grant Avenue, after flames engulfed the dome-like building within minutes of it catching fire around 11:15 a.m.

About 100 people were inside the fitness center when the fire broke out, AFC general manager Eric Chernikovich told 6ABC. The building reportedly caught flames while work was being completed on the roof.

Video from the scene shows thick plumes of black smoke rising from the building as its white roofing disintegrated.

AFC Fitness president and CEO Matt Littman issued a statement Monday afternoon promising members that the fitness center will be rebuilt. Other AFC locations in Bala Cynwyd, Jenkintown and Feasterville will be accessible to members who typically use the Northeast Philadelphia facility.

"We truly appreciate the understanding and support of our members and the community during this difficult time," Littman said.

RIGHT NOW: Fire crew are still on the scene here where a large fire broke out at AFC Fitness in Northeast Philadelphia. @NBCPhiladelphia pic.twitter.com/mp2twIhery

#BREAKING: This is a photo of the 3 alarm fire in Northeast Philadelphia. (Photo by @FOX29philly) pic.twitter.com/astzD2zBxq

Fire department officials advised residents in the area surrounding Grant Avenue to remain in their homes and keep windows shut until the fire has been extinguished. Commuters have also been asked to avoid Grant Avenue betwene Frankford Avenue and Academy Road while crews remain at the scene.