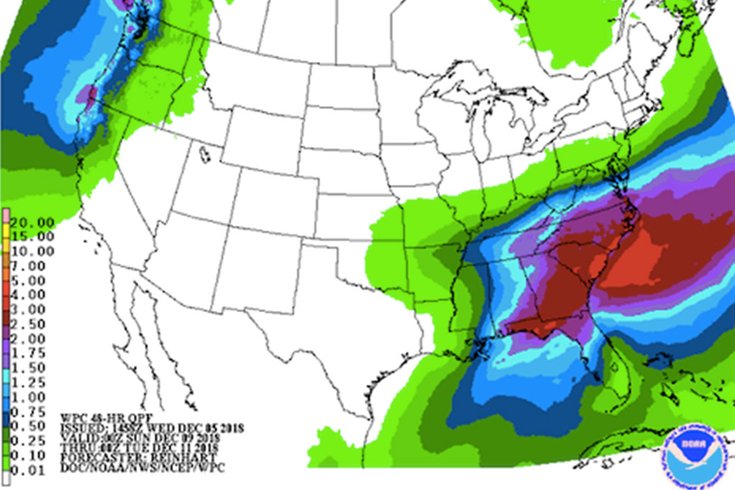 Forecasters are expecting a winter storm to dump as much as 2-3 feet of snow in some places across the southeastern United States over the weekend.

A major winter snowstorm will creep through the southern states beginning Saturday night, immobilizing the region with snow, ice and flooding rain.

The storm, which will combine moisture from Gulf of Mexico and cold air out of the Northeast, could devastate areas with up to 2-3 feet of snow in places, according to AccuWeather meteorologist Alex Sosnowski.

And it's not out of the question that some snow could push northward along the Atlantic Coast, edging into Washington, D.C., Philadelphia and perhaps even New York City by Monday, meteorologists said.

Temperatures here will be colder than average by about 10 degrees through Monday, according to the National Weather Service.

Meanwhile, forecasters are warning of possible downed trees and power outages to the south. Travel will be difficult on highways and flights look to be impacted at airports in Washington, Atlanta and in between, they warned.

"In areas from the mountains of western North Carolina to parts of southern West Virginia and western and central Virginia, this will be a major storm with the potential for a foot or more of snow," according to AccuWeather Senior Meteorologist Brian Wimer.

Here is the 7-day forecast for the Philadelphia area from the weather service:

Thursday night: Mostly cloudy, with a low around 30. Southwest wind 7 to 9 mph.

Friday night: Mostly clear, with a low around 24. Northwest wind 3 to 6 mph.

Saturday: Mostly sunny, with a high near 36.

Saturday night: Mostly cloudy, with a low around 24.

Sunday: Mostly cloudy, with a high near 37.

Sunday night: Mostly cloudy, with a low around 26.

Monday: Partly sunny, with a high near 39.

Monday night: Partly cloudy, with a low around 27.

Tuesday: Mostly sunny, with a high near 38.

Tuesday night: Mostly clear, with a low around 26.

Wednesday: Mostly sunny, with a high near 39.