Max Weinberg: thundering till the end

And after 40 years, the Boss can still bring a tear to this drummer's eye 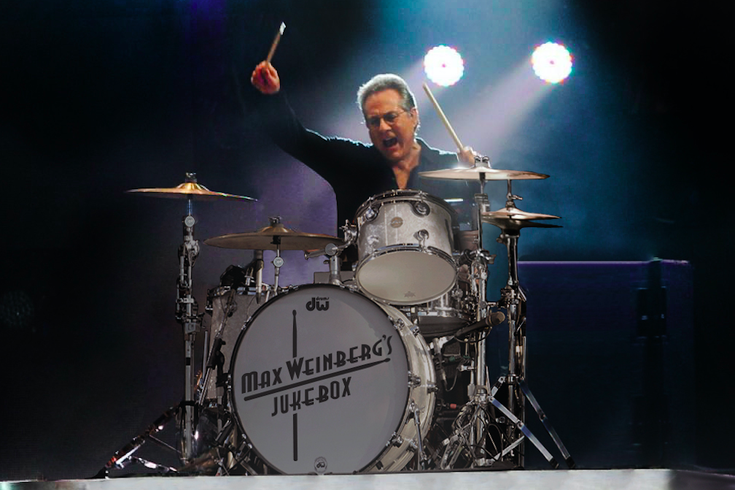 “With Bruce, you had to pound and you had to swing. And that’s still true. I just got better and more nuanced as time and touring with him went on," said Weinberg.

With Bruce Springsteen hanging out on Broadway through the rest of 2017, his loyal collaborators in the E Street Band are currently hitting the boards on their own.

While saxophonist Jake Clemons and guitarist Little Steven Van Zandt are relatively new to the game (Van Zandt hasn’t played under his name in years), drummer Max Weinberg is an old hand at the solo life.

“I think I’ve always tried to make a role for myself apart from Bruce,” said Weinberg, on a rare day off from his new Jukebox Tour, whose Philly date at World Café Live is tomorrow night.

“I have a really strong work ethic. Always did, ever since I was a kid. Besides, I’m never going to retire. Sinatra tried it for like 14 months and it didn’t work. Musicians never retire.”

That would seem the case, considering that Weinberg wrapped up his most recent year-long tour of duty with Springsteen – The Boss’ revisiting 1980’s “The River” with record-breaking 4-hour-plus shows – at the end of February. Now, here the drummer is, six months later, gathering a quartet of crack musicians together to play Weinberg’s favorite rock songs from his youth. Does Weinberg not like hanging out at home?

“No, I love my home and don’t have an itch to scratch,” he said with a laugh. “I do, though, truly love playing for audiences and with really good musicians. That’s my thing. I’m not an artist of any kind. Bruce is the artist. What I am is a craftsman. And I love to ply my trade.”

“That’s a gig that really broadened my chops and made me more comfortable fronting my own bands,” said Weinberg, a drummer who had already grown up with a variety of rhythmic influences such as Buddy Rich, Elvin Jones and Keith Moon.

“When I first hooked up with Bruce, he used to encourage me to play like Moon,” said Weinberg, of The Who’s late, great drummer.

“With Bruce, you had to pound and you had to swing. And that’s still true. I just got better and more nuanced as time and touring with him went on.”

His love and admiration of Springsteen and his work as a musician and a composer is apparent when speaking with the drummer.

“Look, I’m really lucky and I know it,” said Weinberg. “I know a lot of studio guys who spent most of their session time polishing fill-in-the-blanks. Me? I get to work on one of the most dynamic musical catalogs in history – and it’s still going strong.”

Ask Weinberg if he’s witnessed the “Bruce on Broadway” experience, and he says “yes” with great brio.

“The funny thing is that I’ve worked with this guy for over 40 years, and I still found out things about him during this show that I didn’t know. He made me cry one minute, then laugh out loud hysterically the next. I’ve certainly seen him and played with him in a stripped-down fashion, but this was different. And it’s not a concert, but rather a play – like ‘Our Town,’ by Thornton Wilder. Bruce’s show and my new show are worlds apart.”

I’m never going to retire. Sinatra tried it for like 14 months and it didn’t work. Musicians never retire.”

Weinberg says that his “Jukebox Tour” is a feel-good romp through rock n’ roll’s last six decades. Not only will the shows trigger an audience’s sense of its collective past, but there is Weinberg’s feelings of nostalgia and love of the classic rock and pop songs of his youth to consider.

Weinberg will put the selections on a video monitor and the crowd will select the songs, “just like a jukebox,” he said. Though the drummer swears by his entire selection of classics, he does have his favorites. They include The Who’s “I Can See for Miles” and Chad & Jeremy’s “A Summer Song.” Weinberg also digs playing with a crack batch of musicians.

“I like to find guys who play Beatles songs as a thing,” says Weinberg of his pals, The Weeklings (Bob Burger, Glen Burtnick, John Merjave and Dave Biglin).

“Musicians who play The Beatles know what it means to find the nuances and details of any song.”

Talk to Weinberg about playing Philadelphia this Tuesday, and he again mentions nostalgia. He has family in the area, and his roots with Springsteen can be traced to Philly.

“I played my first gig with Bruce at the Main Point and my second gig with him at the Tower,” said Weinberg. “We may have always been called a New Jersey act, but Bruce and the E Street Band are just as much of a Philly thing.”