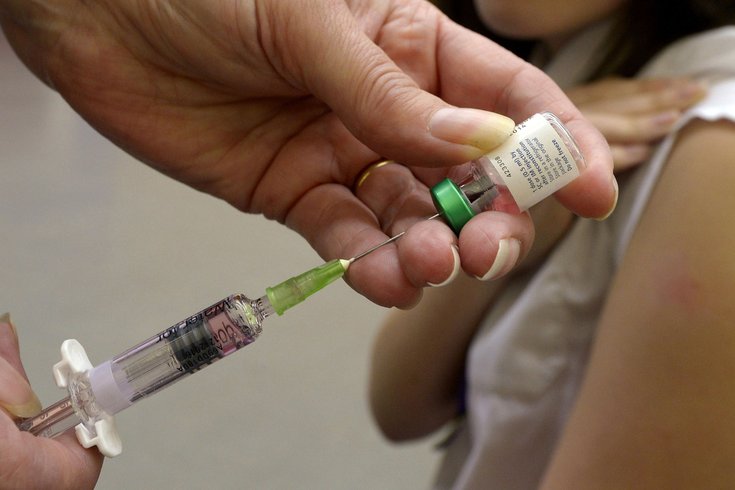 Measles outbreaks were declared over just before they hit their one-year anniversaries, enabling the United States to hold onto its measles elimination status. Above, a measles vaccination is administered.

A measles outbreak in New York that persisted for nearly an entire year finally was declared over last week.

With that declaration, the United States narrowly held onto its measles elimination status, a 19-year distinction considered a historic public health achievement. But the outbreaks in New York City and nearby Rockland County nearly wiped that away.

The World Health Organization considers measles eliminated when endemic virus transmission is absent in a country for at least 12 months. That doesn't mean outbreaks can't occur. Rather, the source of those outbreaks stem from someone contracting the virus elsewhere and then traveling into the United States.

The elimination status can be lost when an outbreak continues for at least a year. The outbreaks in New York ended just shy of that mark, enabling the United States to hang onto that status.

Yet, the outbreaks – the largest of many witnessed across the country – showcased the vulnerability of unvaccinated communities.

"It's more contagious than the flu – and people generally know the flu is pretty contagious," said Dr. Heather Clauss, an infectious disease doctor and the associate dean of faculty affairs at Temple University's Lewis Katz School of Medicine. "If the majority of Americans weren't vaccinated, it obviously would have been a lot worse."

There have been 1,250 confirmed measles cases this year in 31 states, including Pennsylvania and New Jersey, according to the U.S. Centers for Disease Control and Prevention. That's the most the United States has seen since 1992.

More than 75 percent of measles cases are linked to the outbreaks in New York, where the virus primarily spread among Orthodox Jewish communities with low vaccination rates. Those outbreaks finally ceased just weeks before the anniversary of their respective commencements. It has been more than 42 days – the equivalent of two incubation periods – since the last person fell ill.

Losing the elimination status does not carry a defined political, economic or practical penalty. But physicians say the potential loss should serve as an eye-opener to the importance of vaccines and the dangers of the disease they prevent.

"I think the status itself is not that important," said Dr. John Russell, chair of family medicine at Abington-Jefferson Health. "You're not going to stop vaccinating people. I think the takeaway lesson is how small our planet is. You can be anywhere on the globe in 30 hours. Measles is still endemic worldwide."

There were 364,808 measles cases reported worldwide during the first six months of 2019 – the highest amount since 2006, according to the World Health Organization. Within the last year, the United Kingdom, Greece, Venezuela and Brazil all lost their measles elimination status.

The virus is not the benign sickness depicted by an infamous Brady Bunch episode, Russell said. The disease can prove fatal.

Some 110,000 people worldwide – mostly children under age 5 – died of measles in 2017, according to the World Health Organization. Before widespread use of the measles vaccine, developed in 1963, about 2.3 million people died every year of measles.

Across the United States, the measles vaccination rate remains above 90%. That creates a so-called herd immunity that generally protects people who don't receive the vaccine. Some people, including organ transplant patients, cancer patients and people with autoimmune disorders, are medically unable to receive the measles, mumps and rubella vaccine (commonly known as the MMR vaccine).

But there are pockets across the country where vaccination rates dip below 90 percent. And those communities remain vulnerable to widespread outbreaks.

"The Rockland County outbreak is very eye-opening in terms of what can happen to a very vulnerable population," said Dr. Naasha Talati, an assistant hospital epidemiologist at Penn Presbyterian Medical Center.

The New York outbreaks stemmed from people traveling to and from Israel, where measles outbreaks had been occurring, according to the CDC. The virus then spread rapidly within close-knit, Orthodox Jewish communities.

"That kind of set up the perfect storm for this outbreak," Talati said.

Measles is among the most contagious diseases in the world. The virus, which is spread by coughing and sneezing, can live on surfaces for more than 2 hours. Symptoms – fever, cough, runny nose, skin rash and spots inside the mouth – appear 10 to 14 days after exposure.

On average, a person with measles will infect 16 to 19 others, Russell said. By contrast, someone with influenza only will infect 2 other people.

"I think that this measles story is sort of a cautionary tale for all vaccine-preventable illnesses," Talati said. "Measles does cause a significant amount of morbidity and mortality. So does the flu."

Physicians continue to stress the importance – and safety – of vaccinations. Two doses of the MMR vaccine are 97 percent effective at preventing measles.

Still, vaccine hesitancy has gained a strong enough foothold that the World Health Organization now considers it among its top 10 global health threats.

Talati stressed the importance of doctors building trust with their patients, noting it may take several conversations before a vaccine-hesitant parent warms to vaccination.

From there, doctors can better stress the importance of vaccines and rebut misinformation when necessary, Talati said.

Even with the outbreaks over, Talati said medical providers must remain vigilant, recognizing that diseases once common in the United States are re-emerging. They need to recognize the symptoms of diseases like measles and be prepared to treat them.

Measles – or an outbreak of another preventable disease – is likely to pop up again.

"I think we have to stay on our toes," Talati said.