Measles cases have spiked in the U.S., but they're really surging worldwide

Ukraine has a major outbreak, and Germany considers fining parents who refuse to vaccinate their kids 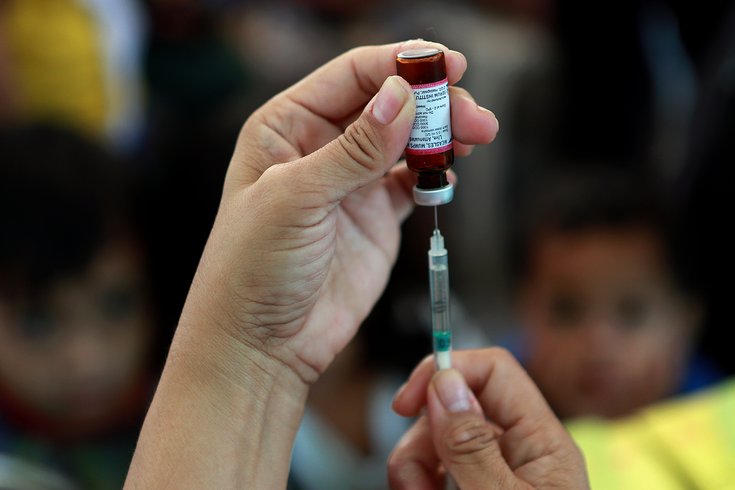 A free measles vaccine is administered during the Philippine Red Cross Measles Outbreak Vaccination Response in Manila. Measles cases rose by 300 percent worldwide during the first three months of 2019, according to the World Health Organization.

Measles cases have risen to 25-year-high levels in the United States.

But that spike is not just a national trend. It's being felt across the globe and health officials are scrambling to slow the spread of the highly infectious disease.

Measles cases reported to the World Health Organization during the first three months of 2019 have increased by nearly 300 percent compared to the same period last year, according to preliminary figures.

A total of 170 countries has reported 112,163 cases, with significant increases being seen in all parts of the world.

The highest increases are in Africa, where measles cases have risen by an astounding 700 percent year over year, and in Europe, which has seen a 300 percent increase.

The virus lives within the nose and throat mucus and spreads easily through coughing and sneezing.

Nearly 110,000 people died worldwide of measles in 2017, the most recent figure available, with the vast majority of deaths occurring in developing countries with weak health infrastructures.

Still, even in high-income countries, about 25 percent of measles cases result in hospitalizations, according to WHO. The disease can cause lifelong disabilities, including brain damage, blindness and hearing loss.

Measles cases also have increased in countries with high overall vaccination coverage, including the United States, Israel, Thailand and Tunisia. The disease mostly has spread among communities where significant number of people remain unvaccinated.

The United States has reported 764 measles cases in 2019, including 60 new cases within the last week, according to the U.S. Centers for Disease Control and Prevention. That's the highest total since 1994, when 963 cases were reported.

Cases have been confirmed in 23 states, including New Jersey and Pennsylvania.

In response, the CDC has developed a measles tool kit designed to help pediatricians counter misinformation about the safety of the measles, mumps and rubella (MMR) vaccine. It includes resources for discussing vaccinations with hesitant parents and fact sheets outlining immunization schedules, potential complications and the risks of not vaccinating.

In Europe, some 34,300 measles cases were reported from 42 countries during the first two months of the year, according to WHO. Most of the cases have been among unvaccinated or under-vaccinated people. Thirteen people have died in Ukraine, Romania and Albania.

The World Health Organization issued a warning Tuesday, according to Reuters, noting the outbreak in Ukraine will continue to spread unless susceptible people are immunized.

"If outbreak response is not timely and comprehensive, the virus will find its way into more pockets of vulnerable individuals and potentially spread to additional countries within and beyond the region," the statement said. "Every opportunity should be used to vaccinate susceptible children, adolescents and adults."

In Germany, Health Minister Jens Spahn has proposed fining parents who do not vaccinate their children, according to The New York Times. Germany already has reported 300 measles cases this year after having 500 last year.

Under a draft Spahn submitted to Angela Merkel's government, parents would be fined as much as $2,800. Critics have questioned whether such a law would infringe on personal freedom.