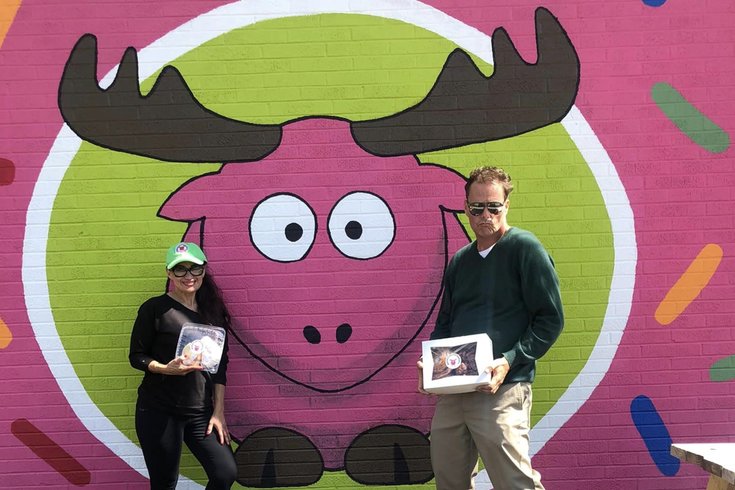 Maggie Moose Bakery in Medford Township, New Jersey is trying to save a mural of its mascot that violates a sign ordinance.

A small bakery in Burlington County is fighting to preserve a bright, pink mural that features its mascot on the west side of the building. But it's a display that Medford Township officials say runs afoul of the zoning code.

Maggie Moose Bakery & Gourmet Gift Boutique, at 185 Route 70, shared a letter from the township zoning board that explains why the mural violates the sign ordinance in the land development code.

Well when it rains it pours y’all…first a burst pipe forced us to close a couple of days and now we received notice from...

The problem is that the moose, which is part of the bakery's logo, counts as a sign. Medford does not allow signs to be painted directly onto buildings, except on historic properties.

"Since your moose logo is included on the painted side of the building, this is a violation of (Section 526) of Medford's Sign Ordinance," the zoning officer wrote in the letter to bakery owner Candy Thibeau.

The pink wall and rainbow sprinkles on the mural are not at issue, but Thibeau believes the township's nitpicking amounts to government overreach.

"Needless to say I am heartbroken," Thibeau wrote on Facebook. "We are in full support of local artists beautifying and bringing smiles to the community through their art! This bylaw seems to be the silliest and it saddens me because as a new business I just wanted to give y’all something fun to look at that makes you smile! It's also disheartening that a business has to go through such hurdles in this town each and every step of the way just to function."

Medford Township has offered the bakery two solutions — either paint over Maggie Moose and replace her with more sprinkles, or apply for a bulk variance from the zoning board to keep the moose on the mural.

In order to apply for the variance, Thibeau wrote that she'll need to hire a lawyer with experience in land use. She told FOX29 that she would rather just pay Medford $1,500 to resolve the issue than hire an attorney to pursue a variance and "waste the board's time over something so petty."

On top of the mural issue, the business also recently had a burst pipe that required the shop to close for a few days. The bakery has since reopened.

In the meantime, Thibeau and her staff are rallying people together on social media to visit the shop and take photos in front of the mural. There's also a petition at the bakery that customers can sign.

"I need to show community support when I go up against the high honchos!" Thibeau wrote. "While I feel this is the silliest infraction, I do not hold the employees of the township at fault for just doing their job, even if it is enforcing (ridiculous) things such as this."