Meet the artists inspiring Philly to get out & vote 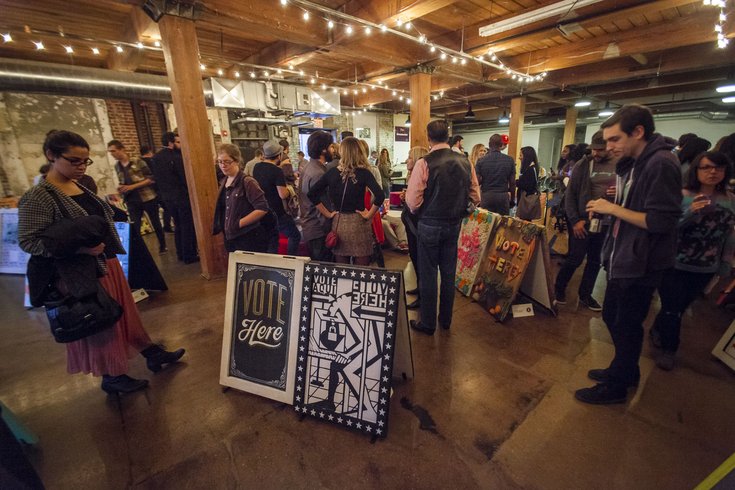 Voting signs at Next Stop: Democracy! "Signs of Change" artist panel event, hosted at Impact Hub on Oct. 14 by Here's My Chance and Design Philadelphia.

Six months, 60 artists and about $181,394 in funding later, Fishtown-based creative agency Here's My Chance has amassed an arsenal of 60 handmade signs emblazoned with "Vote Here" and "Vote Aqui." Come Nov. 3, they'll be dispersed through voting precincts across the city to encourage Philadelphians to vote.

Lansie Sylvia, who led the agency's "Next Stop: Democracy!" project, described seeing all 60 signs together in one space as a "wow" moment.

"It’s not just that we have 60 signs that were created -- they’re 60 original artworks by a variety of people," Sylvia told PhillyVoice. "We have original artwork by Nosego, Miriam Singer -- all these hugely successful artists in the city and beyond, and they took the time to be part of this.

"Everybody could have half-assed it and nobody did," she added. "Everybody swung for the fences."

The signs, showcased Wednesday night at Impact Hub in Fishtown as part of Design Philadelphia's "Signs of Change" panel, were funded by the Knight Foundation and a Kickstarter on a mission to boost voter turnout. During May's primary election, Philly turnout was notably low: just 27 percent of registered voters came out to the polls and only 12 percent of 18 to 34-year-olds showed up. Here's My Chance believes that many who stayed home -- young people, in particular -- want to vote, but simply don't know where to go.

And thus dozens of signs were gathered for display at Impact Hub before standing sentry at Philly polling places come election day. Each A-frame sign was fabricated by Philadelphia Sculpture Gym and designed by artists throughout the city -- illustrators, street artists, sculptors and more, some selected by open call, others in partnership with the Mural Arts Program or hand-selected by Streets Dept's Conrad Benner.

In the current voter climate, just about any statistically significant improvement in turnout would make "Next Stop: Democracy!" a success.

“Even if we're able to move the needle from 27 percent to 29 percent, in the realm of politics, that would be huge," she said.

A team of volunteers and data scientists have been trained to collect data and conduct exit poll interviews at precincts, Sylvia added. Twenty polling places in neighborhoods throughout the city will be compared to 20 control sites. They'll then analyze the data and, after getting a deeper sense of what worked with their project, determine what to do with the 60 signs made for this year's election.

While Here's My Chance hopes to see results that could usher in an even bigger version of the project for next year's presidential election, Sylvia's just happy to have sparked interest in a such an important day.

“This could be a total game-changer for elections in Philly," she said. "Just the idea that a polling place should be a spot to be celebrated is, itself, fairly revolutionary.”

Below, glimpse a few of the "Next Stop: Democracy!" signs and meet the Philadelphia artists who brought them to life. 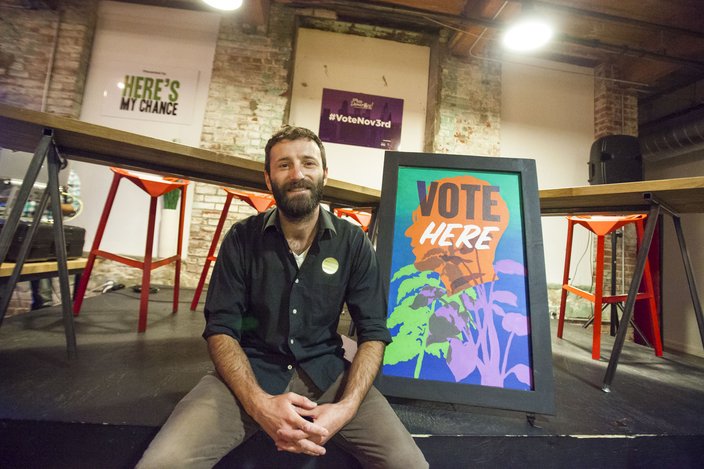 Nda, a panel member at the Design Philadelphia "Signs of Change" event, poses with his sign. (Thom Carroll / PhillyVoice)

For sign artist and muralist Nda, 32, his design became a testing ground for a new artistic concept. Captured in the sign's center is the silhouette of Nda's friend, an idea he's continued to work with since making the sign, he told PhillyVoice.

"I like the idea of taking everyday people that I know and care about and elevating them -- putting them on this large scale," he said. "When it came time for the sign, I started adding silhouettes of other things and I’ve been incorporating that [in other work]. This is a stepping stone to murals I’ve done after the fact, where they’ve had silhouettes of humans with foliage and other objects."

"The sign was a catalyst into a newer body of work."

Nda is a Point Breeze-based New York transplant who came upon the signs project while networking and building his art portfolio in Philly. The signs, he said, are especially eye-catching because of their "duality" -- they are both works of art and works of functionality.

He emphasized that he kept the latter in mind when designing, using a typeface that was blocky and easily read from a distance. As a regular maker of signs, it's his top priority.

"I wanted to make a proper sign – something legible," he added. "Because that’s the most important thing: You’re not just trying to make an art piece, you’re trying to be able to read it and understand that it’s information." 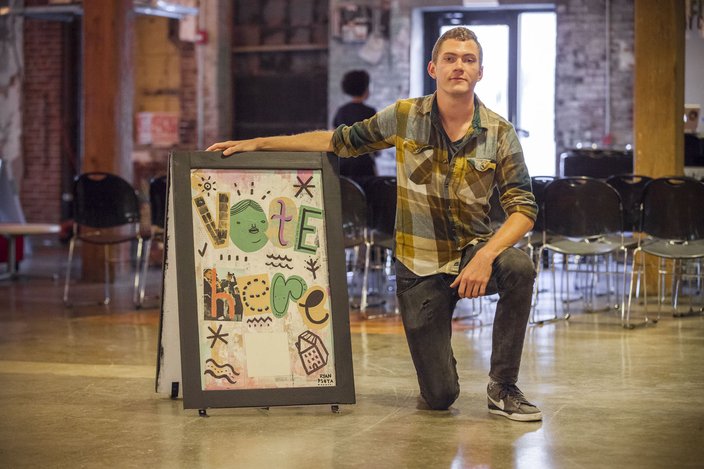 Ryan Psota, also a panel member at the Design Philadelphia "Signs of Change" event, described creating his sign as being akin to putting together a puzzle. (Thom Carroll / PhillyVoice)

Ryan Psota, a 26-year-old illustrator and designer based in North Philadelphia, created his sign using a collage concept.

"I approached it like I do most things I do: I built up a background, added lots of textures and stamps, pasted in newspaper elements and then, in my studio, added all these random papers I have from living in complete chaos," Psota told PhillyVoice, laughing. "It’s like a puzzle, cutting the letters out and seeing how I can create this typography with collage elements."

His style, he said, is to blend old and new, drawing influence from Japanese characters and modern street art aesthetics. The sign has a gritty, textured look to it with layers that aren't immediately obvious to an onlooker -- the chaos of his warehouse work environment shining through. 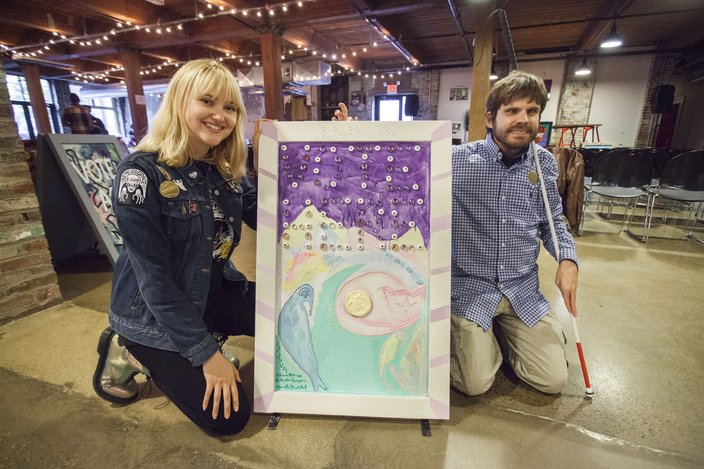 Sonia Petruse, left, and Austin Seraphin, right, pose with their braille sign. They met at an IndyHall networking event in 2013 and have been making street art ever since. (Thom Carroll / PhillyVoice)

Sonia Petruse, 29, and Austin Seraphin, 38, who are known for their Geek Award-winning braille street art, approached their sign with accessibility in mind.

"We want to call attention to accessibility at the polling place. There have been issues with that," Seraphin, who is blind, told PhillyVoice. "When you have a disability, everything is an adventure."

Petruse, who creates the visual elements of their work after talking out the philosophy behind it with Seraphin, told PhillyVoice she used a combination of puff paint, glitter paint and tissue paper to create rock-like landscapes for their sign. ("Mowntains," she calls them -- they both love cats.)

The braille, they agreed, added an extra element to their design.

"We play with formatting and how things look visually, and there’s this whole aspect to how the braille looks visually that Sonia has to integrate into her [art]," Seraphin said. "It's very tactile, and you have to be mindful of the differences when you're experiencing it by touch.”

The mountains, birds and cats included on the sign are symbols the pair often uses in their work. The sign's penguin, meanwhile, is merely a representation of how much Seraphin -- a computer programmer by day -- loves Linux. 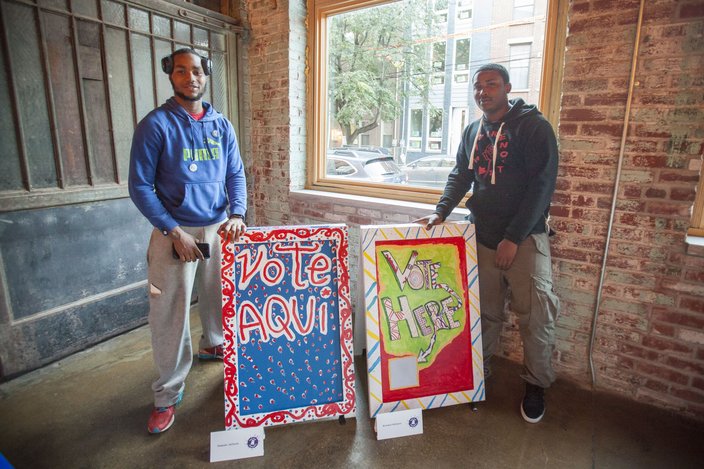 As part of the Mural Arts Program Guild apprenticeship program, a partner for "Next Stop: Democracy!", 19-year-old Daqwan Jackson and 20-year-old Richard Williams wanted to keep their works simple.

Jackson, who said he's had an interest in drawing since first grade, has a particular affinity for graffiti art. Thus, his approach was to bypass the planning process and get right to the art: a patriotic theme of red, white and blue.

"It comes naturally to me," Jackson told PhillyVoice. "I don't draw with a marker -- just paint. I get straight to drawing on it."

Williams, meanwhile, spent a little more time crafting his. He spent a week planning it out, laying parachute cloth over the sign and painting over it with broad strokes of green and red, Then he added stripes -- "railroad tracks," he called them -- around the frame. He said he appreciated the opportunity to work on the project and has been happy to have his sign well-received.