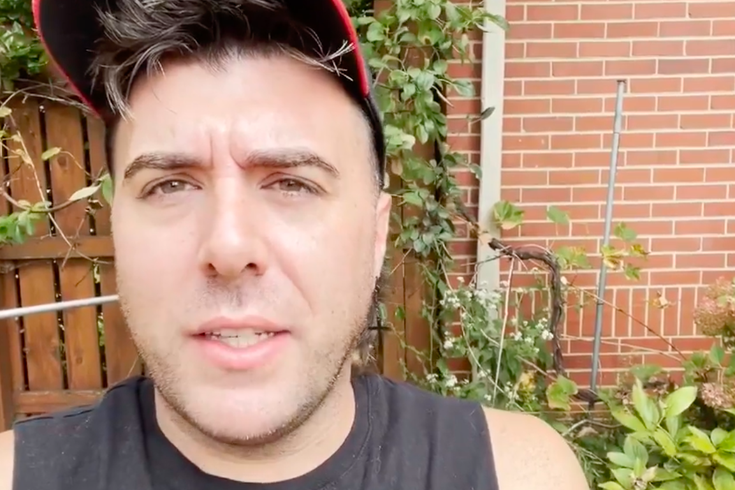 'Over the past year, I've been dealing with anxiety and depression and I'm sure a lot of people are in similar boats and can relate,' Troy Hendrickson, the comedian behind the character Aunt Mary Pat, says in a video shared to Facebook.

Troy Hendrickson has entertained many on social media and at shows across the Philadelphia with his hysterical Aunt Mary Pat DiSabatino sketch.

But in a video shared to the character's Facebook page Wednesday, the comedian wasn't dressed up like the suburban Philly mom with the strong Delco accent who loves the Eagles and works at Acme.

Instead, the 33-year-old from Wilmington, Delaware opened up about how he's been struggling with anxiety and depression during the COVID-19 pandemic. He had been receiving messages from fans wondering where his iconic videos have been.

"Over the past year, I've been dealing with anxiety and depression and I'm sure a lot of people are in similar boats and can relate," Hendrickson said.

His first major anxiety attack occurred last Thanksgiving, which Hendrickson described as "not pleasant at all." He said his anxiety and depression affected his ability to come up with creative new ideas for videos. But he said that six months of therapy has helped him get back to his old self.

"The anxiety has lessened significantly, and sometimes the depression comes and goes," Hendrickson said. "I just wanted to say that I'm in a very good mindset, a safe space. I'm not in any danger or anything like that, but it really affected my creativity and my motivation. For me, I don't like putting out content that I'm not proud of or forcing myself to do content and it not be what I want it to be or it not be worth it for even you guys to watch."

The number of Americans experiencing mental health issues has spiked amid the COVID-19 pandemic.

A report published by the Kaiser Family Foundation in February found that about 4 in 10 adults have reported symptoms of anxiety or depression during the COVID-19 pandemic. That was up from roughly 1 in 10 adults who reported such symptoms in 2019.

"Reach out to people. Check on them. It's OK to get help. It's OK to say 'I can't do this on my own' and get therapy or talk to somebody or whatever works for you. You're not alone, I know I'm not alone, and I can't wait to get back out there to do some more shows and create some more great content for you guys."

Like most people, Hendrickson was isolated at home at the onset of the COVID-19 pandemic. With everything shut down, he was unable to do any shows. But he's since been able to find consistent work at outdoor, socially-distanced shows. He recently completed his "Downashore & More Tour," which included stops in Downingtown and Wildwood.

Though the shows were difficult at times, they were easier than trying to record the Aunt Mary Pat videos by himself at home, he said.

"The shows are even hard sometimes, given the motivation to get up and get ready and go out there," Hendrickson said. "But the easiest thing about the shows is that once I get out there and see the audience reactions ... that keeps me going and doing shows and performing live. And in that sense, it's easy. The gratification of doing something worthwhile and good and you get that audience reaction. Videos are a little more difficult for me. Sitting at home, beating myself up over if it's good or not, and all that kind of stuff."

Now in a better place creatively, Hendrickson said he's got some new content coming out soon. His fall tour, "This Hoagie is Wet Hun," is already underway. He has performances in October scheduled for Manayunk; Swedesboro, New Jersey; Bensalem, Bucks County; and Bala Cynwyd, Montgomery County.

The comedian also has a holiday tour slated to start in November.

Hendrickson expressed his gratitude to everyone who has come out to a show, shared a video or left a supportive message.

"That's truly what keeps me going and doing what I do," he said. "When I started this full-time four years ago, it wasn't an easy choice but I knew it was something that I had to do for myself and I don't regret it one bit. 2020 was hard, sitting home, not being able to work. But now coming back, getting back into that mindset and getting back into that creative space and motivating myself, it's getting back there."

Hendrickson's fans responded to his video with overwhelming support.

"Troy you are amazing!," one Facebook user wrote. "Taking care of yourself is the best gift you could give your fans. We love you!"