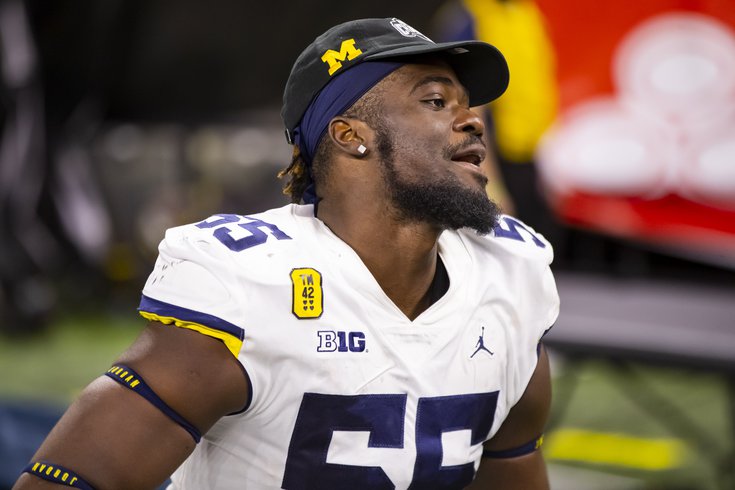 If you've followed NFL mock drafts this offseason, you've no doubt seen Michigan DE David Ojabo projected to be drafted by the Philadelphia Eagles. In fact, in our Eagles-only mock draft, version 1.0 back in January, we had Ojabo going to the Eagles with the first of their three first-round picks.

Ojabo tore his Achilles while working out at his pro day on Friday, according to multiple reports on Twitter.

God got me!! ima be back stronger than ever🖤all part of my story.

Ojabo is inexperienced, as he has only played in 14 career college games. He was born in Nigeria, and moved to Scotland, before heading to the United States for high school. That makes his 2021 breakout season for Michigan all the more impressive, as he collected 35 tackles, 11 sacks, 5 forced fumbles, and 3 batted passes.

After a strong performance at the NFL Combine, where he ran a 4.55 40 time, Ojabo solidified his lock first-round pick status. The Achilles injury probably changes that, obviously.

The Eagles have taken swings on injured players in the second round in recent years, with mixed success. Cornerback Sidney Jones also tore his Achilles at his pro day in 2017, and the Eagles selected him at 43rd overall. That didn't work out. In 2021, they selected Landon Dickerson 37th overall. Dickerson had a long injury history in college, including a torn ACL in December of 2020. So far, it looks like that gamble will pay off.

So Ojabo could still be in play for the Eagles, but more likely now in Round 2, where they select 51st overall.