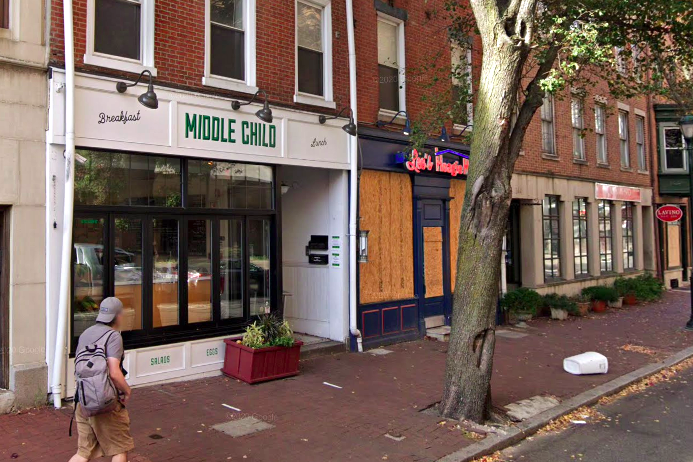 The beloved diner-deli Middle Child, at 248 S. 11th St., will open a second restaurant in Fishtown, at 1232 N. Front St., possibly as early as this summer.

The deli-diner, at 248 S. 11th St., began hinting about the arrival of a new larger restaurant in December after a mention by Food & Wine, listing the forthcoming eatery as one of 15 "highly anticipated" restaurant openings in the country for 2021. The new location will be called Middle Child Clubhouse.

Following that article, Middle Child posted a faux denial of the news on social media, calling the report, "Totally untrue! But if it were true we would tell you that there's an extremely inclusive clubhouse coming to Fishtown by the end of 2021," a post on to Middle Child's Instagram account read.

On Thursday, owner Matt Cahn confirmed to the Inquirer that the Fishtown location would be opening this year. He said Middle Child Clubhouse – which will be at 1232 N. Front St. in Fishtown – hopes to open its doors by the summer, and he quipped that the new spot would have a jungle gym, a beer garden and a Dunkin Donuts.

After the article was published, the restaurant's Instagram account posted this: "Beer garden?!? Jungle gym?!? Half of the restaurant will be an @dunkin?!? Sounds like an April Fool's Day prank if I ever heard one."

Not so sure about the Dunkin' Donuts part – the Instagram post is from April Fool's Day – but it at least appears to be true that a second Middle Child restaurant is in the works for Fishtown. Cahn also told the newspaper that the new restaurant will have expanded features compared to its existing location – like dinner hours. It will also have a bar and be five times the size of the original location.

Middle Child is known for its sandwiches like the Vegan "Phoagie" and its extra-large, "egg pile" breakfast sandwiches.

The restaurant has received acclaim from beyond of the Philly region: In 2018, Travel + Leisure applauded the new eatery; and in 2019, Bon Appetit highlighted the spot for its vegetarian hoagies and store merchandise.

Rupert Grint, the British actor who played Ron Weasley in the Harry Potter movies, even told the New York Times this year that it's one of his favorite restaurants in Philadelphia.