Could this be the beginning of the end for the longtime host on 97.5 The Fanatic? 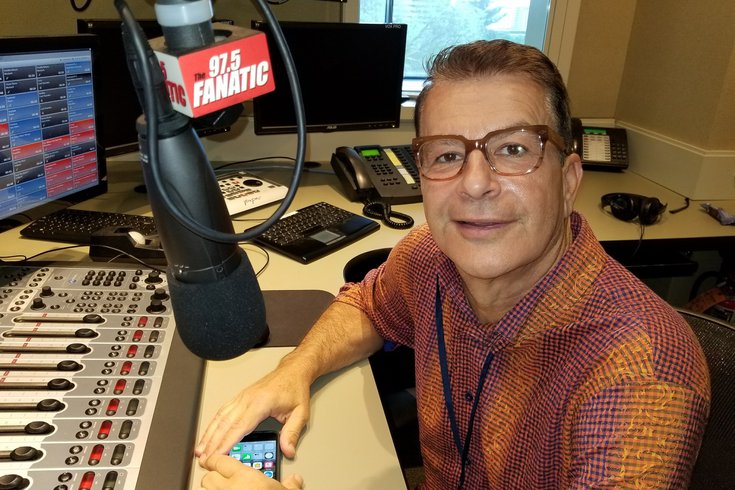 UPDATE [Monday, 2:05 p.m.] — After not appearing on his show for the remainder of last week follow his outburst on Tuesday, Mike Missanelli remained absent on Monday, with one source telling PhillyVoice that he won't be on the air for the remainder of this week. Whether or not that is due to a suspension or a vacation, as the host claimed, remains unknown.

On Wednesday, a day after throwing his headset and appearing to curse out his producer on the TV broadcast, 97.5 The Fanatic afternoon host Mike Missanelli was noticeable missing from the broadcast. In his place was co-host and producer Tyrone Johnson, who was on the receiving end of Missanelli's misplaced anger, with Natalie Egenolf in her normal spot and Andrew Salciunas filling in as producer.

According to Kevin Kinkead, Missanelli was suspended over the incident, something the longtime host denied to Crossing Broad, claiming that his absence was due to vacation.

The Tuesday blowup was the result of an argument over the viral video of a confrontation between a birdwatcher and a woman walking her dog off-leash in Central Park. The woman, Amy Cooper, was caught on camera calling the police on Christian Cooper (no relation) and making false claims that he was threatening and assaulting her when he simply asked her to put her dog on a leash in an area of the park where that is required. Both Johnson and Egenolf took the side of the birdwatcher, while Missanelli played devil's advocate and took the side of the woman, painting himself into a bit of a corner.

And once he realized he had lost the argument, he blew up.

After they returned from break, it seemed that Missanelli and Johnson were still going at it, with the former appearing to curse out his producer just before the segment began.

Obviously, with Missanelli's absence coming directly on the heels of that heated exchange with his colleagues, immediate questions were raised about whether or not Missanelli had been suspended or had taken some time himself to cool off. And the reports surrounding his sudden absence vary. Missanelli told Crossing Broad's Kyle Scott that he was using some vacation time before sports start back up later this summer — it's worth noting that he made an appearance on FOX's Good Day on Wednesday morning — but a pair of 97.5 sources told both Scott and Kinkead that the longtime radio host was suspended for the week without pay.

In a text exchange, he told me he was using a vacation day today and for the remainder of the week, explaining that he would be unable to use them once sports returned.

“I have five weeks of (vacation). With sports starting soon, I’ll never be able to take it then.”

The ol’ blow out the week after returning for only one day after Memorial Day routine. Of course, might be a much-needed cool-off period.

Following maestro’s Tweet on the matter, I heard from a well-placed 97.5 source, who states, flatly, that Missanelli was suspended, without pay, for the remainder of the week, as Kevin first reported earlier. The source also says – though there is a subjective nature to what follows – that station employees are fed up and seek to have Mike fired.  [crossingbroad.com]

That last line — the one suggesting that he is generally unliked by fellow employees — might be the most damning.

Scott later added that "Mike is adamant that he wasn't suspended." He also wondered whether or not this could be the beginning of the end for Missanelli, who has had issues in the past and whose contract with the station is up at the end of the year.

In the short-term, however, it remains unclear whether Missanelli was suspended or simply took off, although coming in the day after a holiday and then taking the rest of the week off — and then bragging about how much time off you have — doesn't really track. Most people in that situation would simply take the entire week off following a Monday holiday. The only reasonable excuse is that he took the rest of the week to cool off, as Scott suggested. While that would likely have been the right move, assuming he wasn't suspended, it would've helped him to get out in front of that and issue some sort of statement on Twitter. Otherwise, all that's left is speculation.

An email to acting Program Director Eric Camille for more information on Mike's status at the station remained unanswered at the time of this writing, but that's not surprising in context.

While we in the media and those at home are not owed anything in that regard, the employees at the station are. And several station employees tell PhillyVoice that they are just as in the dark as the rest of us, with no one knowing what the absence of the station's most well-known host means going forward. Just as there has been no public statement from the station — something insiders describe as The Fanatic's standard M.O. in these types of situation — there has been nothing released internally either. In other words, they're finding all this out through the media.

That's not a great look.