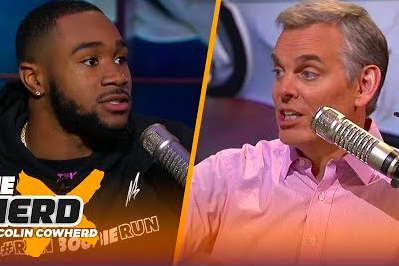 The Herd with Colin Cowherd/YouTube

Eagles running back Mile Sanders looked back on his successful rookie season during visits to several shows on FS1.

Philadelphia Eagles running back Miles Sanders set all kinds of franchise rookie records this season on the way to earning serious consideration for Rookie of the Year honors.

Over the course of the year, Sanders demonstrated he's a legitimate weapon both on the ground and in the screen game. Even more impressively, he pulled this off while most of the Eagles' skill position players were out with injuries. Teams were able to key in on him and he still had an excellent stretch run into the playoffs.

Sanders' success has not gone unnoticed among NFL media at the national level. On Thursday afternoon, he was invited onto FS1's "Undisputed" with Skip Bayless and Shannon Sharpe and "The Herd with Colin Cowherd."

On "Undisputed," Sanders found himself in the middle of Skip and Shannon's endless bickering about the Eagles-Cowboys rivalry. He kept his cool and wasn't willing to take their bait to bash Orlando Scandrick, who's been on "Undisputed" several times to undermine the Eagles. Sanders even got Bayless to admit he struck fear in him during the second Eagles-Cowboys game.

Later, on "The Herd," Sanders opened up about how his role evolved over the course of the year and what it meant to play behind Saquon Barkley at Penn State. He also talked about the leadership of Carson Wentz, saying he brought out the best in his teammates no matter who was on the field. Sanders was even nice enough to bring all the hosts his custom "Run Boobie Run" apparel.

During an offseason that's expected to bring significant staff and roster shake-ups, Eagles fans can feel secure that the team has a promising young runner who believes his best football is still ahead of him.