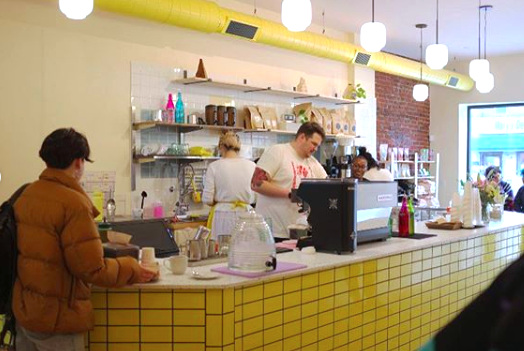 Mina's World opened late February in West Philadelphia. The brightly-colored coffee shop has a large, brightly lit seating area and a strong theme of yellow decor. Mina's World serves coffee drinks, as well as samosas, bagels, vegan pastries, and vegan ramen cups you can eat while inside the shop.

Mina's World, a bright, new cafe with a message of inclusivity has opened in West Philadelphia, joining a host of other coffee shops in the neighborhood.

Mina's drink menu includes espresso drinks and a fridge stocked with Topo Chico waters and chocolate milk. Food options will include vegan pastries from Crust Bakery in Northwest Philadelphia, samosas from International Food & Spice on Walnut, bagels, and ramen packages you can enjoy in the cafe's large, sun-lit seating area.

It will be a neighbor to several other up-and-coming businesses in West Philly and on 52nd Street, as well as coffee shops like Satellite Cafe, Milk and Honey Market, Earth Cup, ReAnimator Coffee, Green Line Cafe, and others nearby.

On their Yelp page, Mina's boasts it is the first QTPOC (Queer and Trans People of Color) owned and operated cafe in Pennsylvania. Other messages of welcoming and inclusivity like this have been highlighted on the cafe's Instagram page, which began attracting followers before the store opened.

Co-founder and owner Sonam Parikh said in a message to Philly Voice that they hope Mina's World can be a place where the needs of marginalized people are met.

Pictured here: the cutest, best staff there ever was 😍photo by @dahnoonie

In training with Lancaster-based coffee company Passenger, Mina's founders and owners Parikh and Kate said on Instagram how they hoped to incorporate awareness within their business, which is named for their pet cat, Mina.

"We discussed the importance of place, working in service, environmental impact, queerness and barriers to access in the coffee world," Mina's World said in a post. "It all cemented why it’s so important that Mina’s is staffed by people like us."

Next to their fridge full of snacks, you'll find un-matching T-shirts with the shop's name on it. The shirts have differing designs because they were submitted by two different artists, who each chose a charity that shirt funds would go towards.

Currently, they are donating to Philly-based organizations Juntos and Morris Home.

Parikh also mentioned affordability was important to Mina's World's vision, in making acceptable price points for customers, regardless of their financial situation

"Yes, we always accept cash," said Parikh for Philly Voice. "Yes, you can help yourself to the water if you're parched and need to rest your weary self for a moment. Yes, you can use the bathroom, and no -- you don't have to buy something, but we do hope you'll come back again soon."