MLB Trade Deadline rumors: Texas in the lead for Hamels?

If Saturday was in fact the final game that Cole Hamels pitched for the Phillies, the 31-year-old lefthander went out in style. He very well might have saved his best for last (a “Hollywood” ending, anyone? I’ll kick myself out), no-hitting the up-and-coming Chicago Cubs while receiving some late help from the wind pattern at Wrigley Field.

In what has been an unexpected development to put it mildly, the Phils have rattled off eight of nine out of the All-Star break, a run that culminated with the weekend sweep in the Windy City. Alas, the rare off day can bring us back to reality: The team’s record is still the worst in the majors by 5.5 games, and the front office should approach selling with the vigor of the Duke brothers after the orange crop report is announced in “Trading Places.” Even if it’s hard to believe major-league front offices will be swayed by one-game samples, we can all admit that the no-hitter came at a pretty good time:

The trade deadline is Friday at 4:00 p.m. Hamels is the big name for the Phillies, but controversial closer Jonathan Papelbon could also be on the move. For the rest of the week, we’ll attempt to keep tabs on all of the major rumors and developments concerning the local baseball team. 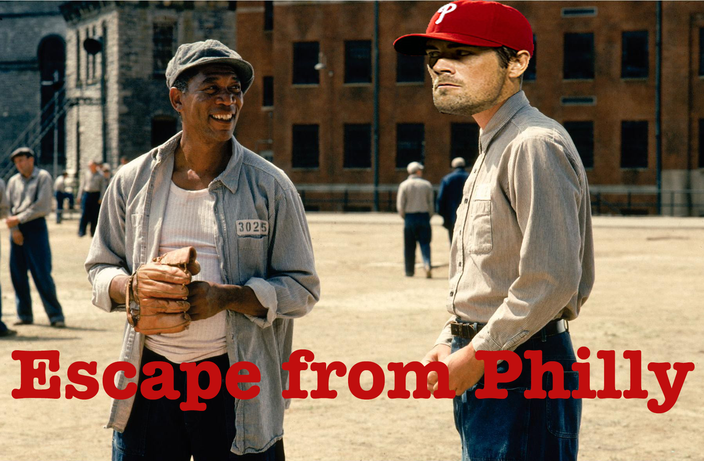 Texas in the lead

As of now, the Texas Rangers appear to be the leader in the clubhouse for Hamels’ services. To further attempt to prove this point, we’re going to link out to a few of the respected baseball writers that have reported as much. First, here is what CSN Philly’s Jim Salisbury had to say:

The Yankees, Rangers, Dodgers and Red Sox all scouted Hamels’ no-hitter. And, obviously, the Cubs, another team connected to Hamels, saw it all. All of these teams are interested in Hamels. According to several baseball sources, the Rangers are the hottest on his trail. The Phillies and Rangers have been talking about a Hamels deal since last winter and the Phillies like several of the Rangers’ prospects, including slugging outfielder Nomar Mazara and catcher Jorge Alfaro, though he is currently sidelined with an ankle injury.

CBS Sports’ Jon Heyman pegged the Rangers as slight favorites in the Hamels derby over the Los Angeles Dodgers:

The Phillies have focused on catcher Jorge Alfaro and outfielder Nomar Mazara in talks with Texas, and are said to want to receive one or the other back in any Hamels talk. The Dodgers have been steadfast in their refusal to part with top shortstop Corey Seager and top young lefty Julio Urias in any talks, which has been a sticking point in discussions on several ace pitchers.

There was a suggestion within the last couple days the Rangers, too, would draw a line in the sand regarding its top prospects. But it isn't known how willing it is to include Alfaro or Mazara at this point.

As did ESPN’s Jayson Stark:

Both the Rangers and Dodgers view Hamels as an attractive alternative to this winter's deep class of free-agent aces, because he is under contract for three more years after this season and has a team or vesting option for a fourth season. The guaranteed portion of his contract runs through only his age-34 season -- whereas a group of free agents in or approaching their 30s, such as David Price, Johnny Cueto and Zack Greinke (assuming he opts out), will be looking for deals that take them into their late 30s.

In a late addition, Fox Sports' Ken Rosenthal just tweeted that Nomar Mazara, Texas' intriguing outfielder, is off the table as of now. Jorge Alfaro is a well-regarded catching prospect:

#Rangers will not move Mazara in Hamels deal, one source says. Will yield on Alfaro only if #Phillies add more $$$. Want to keep Chi Chi.

Giants trying to get in on the mix

San Francisco apparently has some interest in trading for Hamels, but there is a major problem: Compared to many of the other reported suitors, their farm system simply isn’t very good. Without any top prospects to offer the Phillies, the two clubs don’t appear to be a good match. Here is what Joel Sherman of the New York Post wrote:

The Giants are trying to fortify themselves even more to make a run. They are looking for a starter who would go in Game 2 of a playoff series behind ace Madison Bumgarner. They are among the clubs that has shown interest in Philadelphia’s Cole Hamels. Remember: The Giants were in the bidding until the end on Jon Lester this past offseason, so they are one of the few in the majors that can afford to take on a big salary.

However, the Giants are not viewed as a team blessed with a deep farm system, and so far they have not felt anything is close in trade talks, according to major league sources. For example, one club with a top starter to move asked San Francisco for shortstop Lucius Fox. The Giants spent more than $10 million earlier this month in salary and tax penalties to sign the 18-year-old from the Bahamas. They are not about to turn around and trade him.

#SFGiants still shopping for starting pitching, but only for top-of-rotation arms (Hamels, Price) who could start Game 2 in Oct after MadBum

Aaron Judge is a gigantic (literally, a very large man) right field prospect mostly ranked in the Top-15 range that should be ready to play in the majors by 2016. He would probably fulfill the “at least one top-tier prospect” criteria the Phillies are likely looking for. So might hard-throwing righty Luis Severino, who is tearing up the International League at only 21 years of age.

According to Heyman, Brian Cashman isn’t willing to trade either of those players, which makes it sound like the Yankees won’t be acquiring Hamels anytime soon:

The Phillies recently asked for either top pitching prospect Luis Severino or top outfield prospect Aaron Judge from the Yankees in Cole Hamels talks, and the Yankees once again said no.

The Phillies' suggestion was a repeat of a request heard several times in talks between those teams. The Yankees have told all teams that have no intention to trade any of their four best prospects: Severino, Judge, first baseman Greg Bird and shortstop Jorge Mateo.

This one is just for kicks. Hamels wants to pitch for a contender (which the Diamondbacks aren’t), and he could also veto a trade there. Still…

You can add another team to Cole Hamels derby. The #Dbacks have reached out to #Phillies to express their interest, source says.

For what it's worth, Hamels can block a deal to the #Dbacks. Just sayin' https://t.co/xisl8cEvzC

The Cubs bullpen is 12th in all of Major League Baseball with a 3.38 ERA, but as we saw over the weekend, Jonathan Papelbon would likely step into the closer role at Wrigley if Theo Epstein swung a trade for him. MLB.com’s Todd Zolecki is reporting that Chicago is one of the three teams most actively pursuing the 34-year-old closer:

Two baseball sources told MLB.com on Saturday afternoon that the Cubs, Blue Jays and Nationals are the three teams most seriously pursuing Papelbon with less than a week remaining before Friday's non-waiver Trade Deadline.

Papelbon has a limited no-trade clause, but he has said repeatedly it will not be an issue if he is traded to a contender. He also has said he will not leave the Phillies to be a setup man.

Stark says you can probably cross the Nats off that list as well:

Papelbon to the #Nationals? A source said he'd be "shocked" if that happened. The teams did talk about him, though. #phillies #tradedeadline