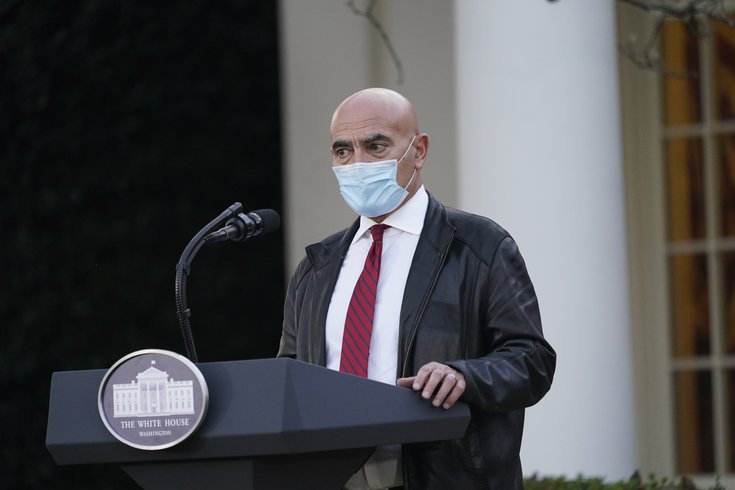 Commissioner Dr. Stephen Hahn and Dr. Peter Marks, who heads the FDA's vaccine division, said reducing the number of doses, extending the time between doses or changing the doses are "premature" strategies that "are not rooted solidly in the available evidence."

"These are all reasonable questions to consider and evaluate in clinical trials," the officials said Monday in a statement. "Without appropriate data supporting such changes in vaccine administration, we run a significant risk of placing public health at risk, undermining the historic vaccination efforts to protect the population from COVID-19."

Federal officials are considering a new dosing regimen that would speed up COVID-19 vaccination efforts in the United States.

Health officials are debating giving two half doses of the Moderna vaccine — rather than two full doses — to certain age groups, Dr. Moncef Slaoui, head of Operation Warp Speed, said Sunday on the CBS program "Face the Nation." The strategy could expedite a rollout that has been slower than anticipated.

The Moderna vaccine would be administered in two half doses, given 28 days apart, to people between the ages 18 to 55. Doing so would still produce an "identical immune response" to receiving two full doses, Slaoui said.

"We know that for the Moderna vaccine, giving half the dose for people between the ages of 18 to 55 — two doses, half the dose, which means exactly achieving the objective of immunizing double the number of people with the doses we have — we know it induces identical immune response to the 100 microgram dose," Slaoui said.

Federal officials are in talks with Moderna and the U.S. Food and Drug Administration about amending the dosing regimen, Slaoui said. The decision ultimately will be made by the FDA.

The United Kingdom has adopted a similar vaccination strategy in hopes that more people will be vaccinated in less time. It calls for extending the time between the first and second doses by as much as three months, and permitting the two doses to come from different vaccine manufacturers, if necessary.

That strategy has drawn criticism from scientists who say the U.K. is taking serious risks by rolling out vaccines differently than they were administered in clinical trials.

Paul Bieniasz, a retrovirologist at Rockefeller University, said the strategy could foster a vaccine-resistant form of the coronavirus.

"My concern, as a virologist, is that if you wanted to make a vaccine-resistant strain, what you would do is to build a cohort of partially immunized individuals in the teeth of a highly prevalent viral infection," Bieniasz told STAT News. "You are essentially maximizing the opportunity for the virus to learn about the human immune system. Learn about the antibodies. Learn how to evade them."

Slaoui dismissed the possibility of adopting the U.K.'s approach, saying scientists lacked data on its impact. Stretching out the dosing timeline possibly could leave people with incomplete or waning immunity, he said.

The half-dose regimen that U.S. officials are considering is supported by data, he said.

"I think that's a more responsible approach that would be based on fact and data to immunize more people," Slaoui said.

Stretching out the dosing timeline — like the U.K. is doing — is only necessary when there isn't enough vaccine to meet demand, Fauci said. But the problem with the U.S. rollout is that administration has been too slow — not a lack of supply.

"We know what the science tells us," Fauci said. "So my feeling ... is let's do it the way the clinical trials have instructed us to do it. But let's get more efficient into getting it into people's arms."

The federal government failed to meet its goal of vaccinating 20 million people in December. Only 4 million people were vaccinated, though another 15 million doses have been delivered to states.