The city is prioritizing shots for people who have been exposed to the virus, which has infected at least 82 people since early June 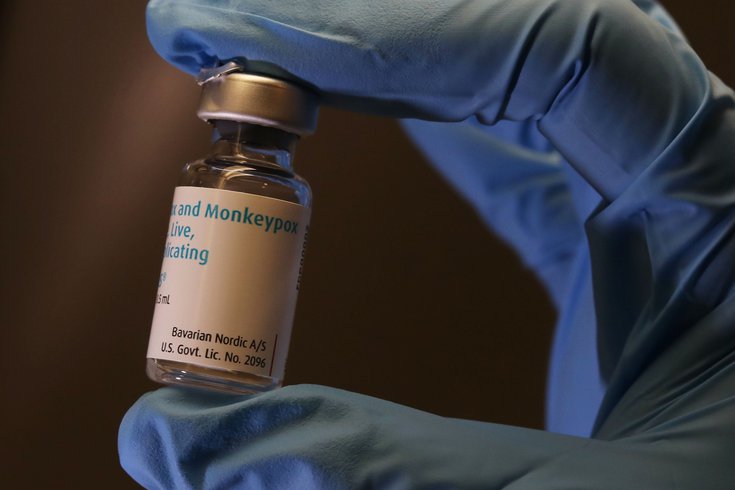 Monkeypox case totals and vaccine availability in Philadelphia are now being posted to the city health department's website in an effort to provide greater transparency about the state of the outbreak, officials said.

The were 82 monkeypox cases as of Monday, according to the new online tracker. That's up from 33 two weeks ago. The first case in the city was detected June 2.

Philadelphia has received 2,625 doses. Of them, 1,613 have been administered at city health clinics, with another 690 sent to health care providers. There are 322 doses still available, but the city expects to receive about 6,000 more in the coming months.

The portal will be updated by the Philadelphia Department of Public Health every Monday.

Although Monkeypox is not a sexually transmitted disease, the global outbreak has disproportionately impacted men who have sex with other men, health officials have said.

Last week, a group of LGBTQ+ advocates called for expand testing and greater vaccine access during a press conference at the Mazzoni Center.

"We need to test, treat everybody, vaccinate everybody," said Jazmyn Henderson, a member of ACT UP Philadelphia, a nonprofit focused on ending the AIDS pandemic. "If we don't do something about it, that means we've learned nothing from the lessons of COVID that just happened, nor the last 40 years of the HIV crisis."

The vaccines are in short supply across the United States. Though the U.S. received a shipment containing hundreds of thousands of doses last week, no more vaccines are due to arrive until October, the Washington Post reported. There are only enough doses of the two-shot Jynneos vaccine to cover one-third of the estimated 1.6 million gay and bisexual men considered at highest risk of monkeypox.

Philadelphia is prioritizing people who have been exposed to the disease. The vaccine also is available to adults ages 18 and over who meet the following eligibility requirements:

And meet one of the following:

• Have had any newly diagnosed STI in the last three months, including gonorrhea, chlamydia, early syphilis or HIV

People who believe they were exposed, or are unsure if they're eligible for the vaccine, can call (215) 685-5488 for more information about the vaccine.

Nationwide, there have been 5,811 cases, with that number doubling about every week, according to the U.S. Centers for Disease Control and Prevention. New York is the epicenter of the outbreak, with 1,390 cases.

Pennsylvania has recorded 161 cases. New Jersey has had 155, but most of them have been concentrated in the northern part of the state.

The U.S. has had more positive tests than anywhere else in the world. President Joe Biden is expected to appoint two public health officials to coordinate the national response.

Robert Fenton, who helped lead the Federal Emergency Management Agency's COVID-19 vaccination effort, will be the White House coordinator. His deputy will be Dr. Demetre Daskalakis, the director of the CDC's HIV prevention division and a national expert on LGBTQ+ health.

Last week, the World Health Organization declared the monkeypox outbreak a global emergency. There have been 23,620 cases worldwide.

The virus has existed in central and west Africa for decades, but this is the first time disease has spread rapidly beyond that region.

Monkeypox typically begins with a fever followed by a rash on the face, inside the mouth and on other parts of the body, including the hands, feet, chest, genitals and anus. Swollen lymph nodes also may occur.

Symptoms usually last for two to four weeks. The disease is rarely fatal.

According to the CDC, the best way to prevent infection is to avoid skin-to-skin contact with anyone who has a rash that resembles the virus and to wash your hands often.