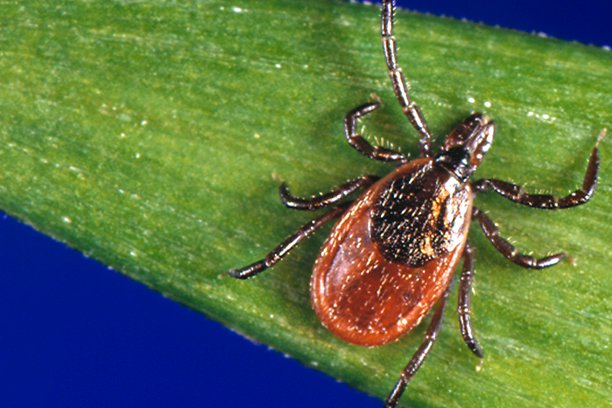 Powassan virus is a rare condition spread by black-legged ticks, also known as deer ticks, as shown above. The virus also is carried by woodchuck and squirrel ticks. It can lead to severe neurological conditions.

A northern Pennsylvania boy faces a difficult road to recovery after a summer tick bite landed him in the hospital with complications from the Powassan virus, a rare disease that led to a serious brain infection.

Jonny Simoson, a three-year-old boy from Harvey's Lake, Luzerne County, was swimming in a neighbor's pool on June 15 when his mother spotted a tiny tick on his right shoulder blade. She removed the live insect with a pair of tweezers and monitored her son's health over the coming days. He didn't show any obvious symptoms, initially, and the bite left only a small red bump.

But about two weeks later, Jonny's mom got a phone call from the boy's daycare staff. Johnny appeared "mopey," complained of a headache and had lost his appetite, his mom wrote on a Facebook page that chronicles her son's medical journey. A picture of the tick that bit Jonny shows the insect was smaller than the tip of pen.

This is the tick that we pulled off Jonathan’s back on 6/15. You can see in comparison to a pen, it is very tiny!

Powassan virus is typically carried by deer ticks, woodchuck ticks and squirrel ticks, which are commonly found in Pennsylvania, the rest of the Northeast and much of the upper Midwest.

The CDC says many people who become infected with the virus don't develop symptoms, and the incubation period can take up to a month before the disease disrupts the central nervous system. There were only 178 cases reported in the U.S. between 2011-2020, including a New Jersey man who died after contracting Powassan virus in 2019.

Though the virus is not usually fatal, many surviving patients are left with neurological symptoms for the rest of their lives.

After observing Jonny's deteriorating condition, his parents took him to a pediatrician, who put him on medication with the belief that he had a virus that would run its course. Over the coming days, however, Jonny developed a fever and became unusually sleepy. He was taken to the emergency room with a temperature above 104 degrees.

Jonny spent nearly two weeks in the hospital undergoing tests, which found that his white blood cell count was elevated to 30,000 — far above the normal range of 4,000-11,000. He was preventatively treated for bacterial and viral meningitis, but as the boy's situation grew worse, he was transferred to a specialty children's hospital to take images of his brain.

Neurologists diagnosed Johnny with meningoencephalitis, a condition that resembles both meningitis and encephalitis — an infection in both his brain and the tissue surrounding it. The disease can lead to cognitive impairment, problems with memory and unusual behavior. Jonny became unresponsive during his stay in the hospital, where he was administered intravenous immunoglobulin as a therapy for his immune deficiencies.

The treatment showed positive results after about five days, and after 12 days Johnny was discharged from the hospital to undergo outpatient treatment. His physical therapy helps with balance and coordination issues, particularly on his left side, while games and other activities at home aim to restore his cognitive function.

Look who is OUT of isolation!

"His balance is poor and he is no where near as agile as he was prior to his illness," Jonny's mother, Jamie, wrote on Facebook. "We forgot what it was like to have a clumsy toddler at home and are desperately trying to protect his head. He is wild as ever though and doesn’t realize his limitations so it makes things really tough and frustrating for all of us."

Jonny's family hopes that their journey will bring greater awareness to tick-borne illnesses, particularly as reported cases of Powassan virus have increased in recent years. The family also encourages healthy people to donate blood that can be used for intravenous immunoglobulin treatment, which played a large role in Jonny's initial recovery.

Tick-borne illnesses are a growing health threat in Pennsylvania, which has the highest number of Lyme disease cases in the country in 2022. Tick bites are especially common during the summer months when people tend to be outdoors more and wear clothing that exposes the skin, though deer ticks remain present during the winter months as well.

The state Department of Conservation and Natural Resources advises the public to take the following precautions to prevent tick bites:

• Apply tick repellents containing permethrin to clothing and EPA-registered insect repellents such as DEET to exposed skin before entering the outdoors. Reapply as needed according to product label instructions.

• Wear light-colored outer clothing and tuck shirts into pants, and pants into socks.

• Walk in the centers of trails, and avoid wooded and brushy areas with low-growing vegetation and tall grasses that may harbor ticks.

• After returning home, remove all clothing, take a shower, and place clothing into the dryer on high heat to kill any lingering ticks. Examine gear such as backpacks for ticks.

• Conduct a full-body tick check using a hand or full-length mirror, including hidden areas such as the scalp, ears, armpits, belly button, and between the legs.

• Check over any pets exposed to likely tick habitats each time they return indoors.

• If a tick is found attached to your skin, use tweezers to remove it carefully, including the head. Monitor for symptoms and contact your doctor with any questions.

Jonny's family continues to provide updates about his recovery on Facebook.

"We are absolutely overwhelmed by all the amazing generosity and thoughtfulness from our community," the family said.