U.S. records first polio case in nearly a decade; here's an explainer on a virus that once caused widespread panic

In the 1940s, outbreaks left more than 35,000 people disabled each year. By 1979, an effective vaccination campaign had eradicated the threat 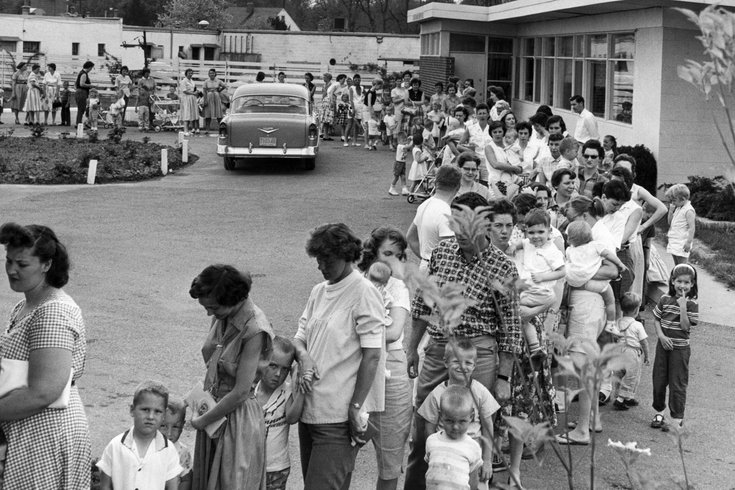 Parents and children line up to receive the Sabin oral polio vaccine at the Stratford Manor Clinic in Madisonville on April 26, 1960.

The United States recorded its first polio case since 2013 earlier this month, sparking questions about a virus that, to many people, is a footnote in history.

Most Americans were not alive in the 1940s, when the polio virus surged, leaving many children paralyzed. Polio outbreaks disabled more than 35,000 people each year and many parents feared letting their children go outside in the summer, when transmission seemed to peak.

The introduction of vaccines in the mid-1950s dramatically curtailed the virus's spread in the ensuing years. By 1979, naturally occurring polio cases had ceased in the U.S.

An unvaccinated New York man contracted polio from someone who had received the oral polio vaccine, which uses a live, weakened form of the poliovirus to provide immunity. That vaccine has not been administered in the U.S. since 2000, but it is still used in other countries. The man was experiencing muscle weakness and paralysis.

His infection was not caused by a natural poliovirus. Rather, he contracted a vaccine-derived form of the virus, which most likely originated abroad, New York health officials said. The weakened virus used in the oral vaccine can be excreted through respiratory secretions, like coughing and sneezing, and in the feces.

There are three types of naturally occurring polio viruses – types 1, 2 and 3. Global vaccination campaigns have completely eliminated types 2 and 3. Now, only type 1 viruses remain, mostly spreading in Afghanistan and Pakistan.

This year, 13 cases of wild poliovirus in those countries have led to paralysis, STAT reports. In East Africa, there has been several cases of paralytic polio reported since the beginning of the COVID-19 pandemic, which may have effected routine vaccination efforts. Because of this, emergency vaccination campaigns were launched in the spring in four countries in East Africa.

The U.S. Centers for Disease Control and Prevention says that most people infected with poliovirus never experience any symptoms, but about 25% will develop flu-like symptoms including sore throat, fever, fatigue, nausea, headache and stomach pain. And less than 1% will develop pins-and needles feeling in the legs, meningitis, or paralysis.

The oral polio vaccine, which was originally developed by Albert Sabin, uses a live, weakened virus to boost antibody protection. The vaccine recipient swallows the attenuated virus in a sugar cube or droplet.

Polio vaccines in the U.S. use an inactivated, dead virus version. This type of vaccine is administered as an injection and was first developed by Jonas Salk. It provides almost full protection against polio-induced paralysis. Children in the U.S. are given the inactivated polio vaccine at 2, 4 and 6 months of age.

The New York case raises the question of whether live vaccines can actually cause an infection. The answer is no, but with some caveats.

A weakened form of a virus cannot cause disease in the vaccine recipient, but if it spreads to someone who is not vaccinated, it can cause illness. The concern with oral vaccines is that the weakened virus has the potential to be spread to close contacts of the vaccine recipient, who may not be vaccinated, through respiratory secretions and feces.

If the attenuated virus is able to latch onto enough unvaccinated hosts, it can mutate until it is strong enough to cause paralysis. Communities most at risk are those with poor sanitation and low vaccination rates.

It's not completely clear how the New York patient contracted the mutated virus, but it's believed that it originally came from overseas. Earlier in the summer, vaccine-derived poliovirus was found in London's sewage system, but there were no cases of infection reported there.

Are there any benefits to live vaccines?

While it may appear that inactivated vaccines are the safest choice in the fight against viral infections, like polio, live vaccines play an important role, infectious disease specialists say.

The complete eradication of wild poliovirus is not possible without the initial use of live vaccines. Because the weakened virus can be shed in an oral vaccine recipient's feces or respiratory excretions, it can circulate in the community, providing some level of immunity to unvaccinated people. A vaccine that uses an inactivated virus can not do this.

Once polio has been eradicated from a continent, it is safe to stop using the oral vaccine contained the live virus and use the injected vaccine containing the inactivated one instead, experts say.

Do you need a polio booster?

Primary vaccination is recommended for anyone who was never vaccinated as a child. People who have received the full polio vaccine series are considered fully vaccinated, infectious disease specialists say.