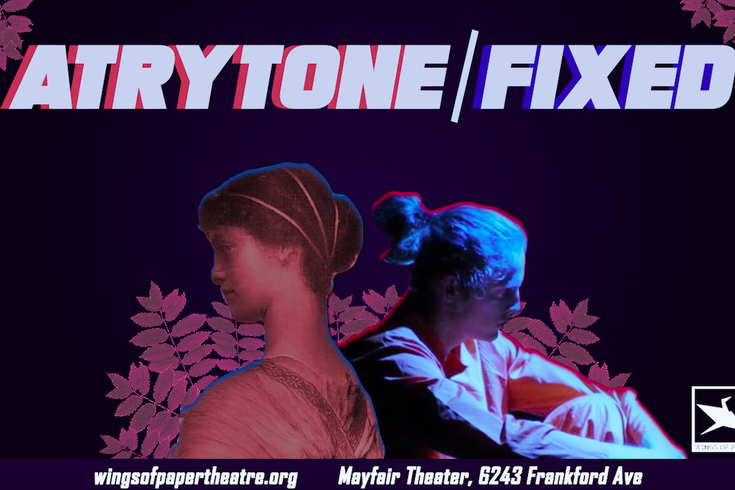 'Atrytone' is the opening play of a two-bill set appearing at the Philadelphia Fringe Festival in September. The play chronicles how the Greek goddess Athena handles her headaches.

Read More
Alice Hakvaag wants you to know about her pain.

Last fall, the 21-year-old actor, director and playwright reached out to me on Twitter with something she thought I’d like: a play about chronic head pain. I wanted to know about the play, but I was especially interested in Hakvaag’s personal experience and how she channeled her pain and frustration into art.

Hakvaag also is directing "Fixed," a play written by Michael Stahler that chronicles a man who cannot remember the events that prompted his imprisonment. Likewise, Stahler is directing Hakvaag's play, "Atrytone."

Hakvaag, a new playwright, said "Atrytone" was inspired by anger and frustration with her own condition.

Hakvaag first developed months-long chronic head pain last fall. She had been getting episodic migraine attacks since high school, but this time was different. The attacks happened multiple times a week instead of a couple times a year. They also triggered vertigo so terrible that there were times when Hakvaag couldn’t stand or even sit vertically.

“I was constantly in pain for the entire spring,” Hakvaag said. “I just dealt with it.”

Hakvaag’s theater mentality helped her push through the pain. She had work to get done before graduating from Temple University and, as the mantra goes, “the show must go on.” For one rehearsal, she had friends help get her to the rehearsal space and then directed while laying down on a couch.

“That’s the most impressive thing I’ve done with a migraine,” she said.

Her pain stumped her doctors. Hakvaag has seen 11 doctors in six years for her head pain, including a psychologist that made her take a test to prove she was not lying about her pain.

“One said it was ‘one of life’s little mysteries,’ and I was like, ‘That’s not I want to hear, sir,'” Hakvaag said.

To better communicate with doctors, she bought a planner and started documenting everything, including when she takes her medication, when the pain starts and what the pain feels like. To this day, she has not been diagnosed.

In a class during her undergraduate studies, Hakvaag wrote down how her head pain and unhelpful doctors made her feel.

For many people going through invisible pain, describing the pain is challenging. Hakvaag used metaphors to best communicate what life is like in her head.

“I was bored and I was angry," Hakvaag said. "And that’s how most of my writing gets done. I blacked out and half an hour later, I looked down and saw two pages of metaphors.”

Those metaphors eventually evolved into "Atrytone," which chronicles how the Greek goddess Athena has to transform into someone else for doctors to take her seriously.

For Athena, the pain is too intense for her to handle, so she dissociates into another personality that can manage the pain. This personality is much better at advocating for herself, but she's working in a system that’s stacked against her. (It’s true. Studies show women’s chronic pain is more likely to be dismissed than men’s.) She transforms into the Greek god Zeus so doctors will finally listen to her and take her seriously.

I particularly connected to one passage when Athena speaks through the powerful, assertive Zeus:

“WHAT does it TAKE to get GOOD HEALTHCARE AROUND HERE?

DON'T you BELIEVE I'm in PAIN?

My HEAD is SPLITTING OPEN.

I can HEAR the THUNDER as each storm starts, fiery lightnings crashing down into my head.

Whatever – whoever – is inside of me?

It is RAW POTENTIAL ENERGY.

It is something that WILL KILL ME if given HALF A CHANCE.”

“I recognize these thoughts — said out loud through a Greek god — as ones I scream in my head,” Hakvaag said. “Not out loud and especially not in front of a doctor, because I am not Zeus.”

But that’s the point Hakvaag is making. As patients, advocating for ourselves is scary and sometimes we have to pretend like we are Zeus.

Hakvaag said she currently is doing much better. Through tracking her pain, she found that stress triggers her pain.

Now that graduation is behind her, she said she’s only getting one attack every two or three weeks.

Once the Fringe Festival is over, she’ll be headed back to her doctor, hopefully with a little Zeus in her ready to be unleashed.