The Monthly Migraine: Symptoms we don’t talk about 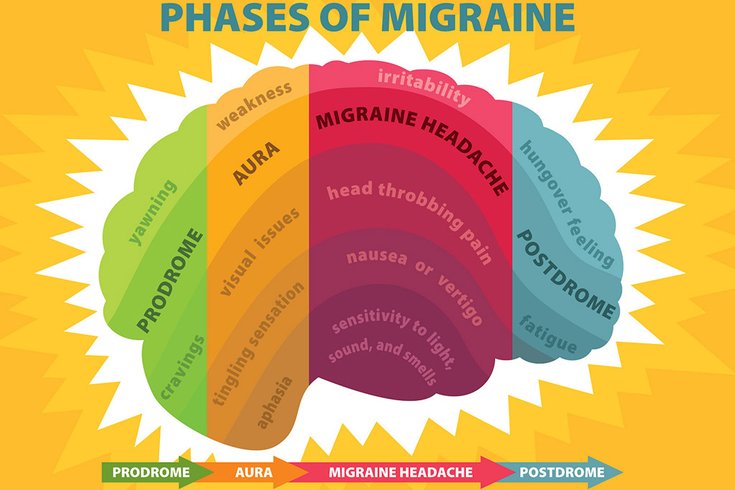 The phases of a migraine.

In the year I’ve been writing this column, I have mentioned the unusual side effects of living with migraine. You may have come across terms like “prodrome,” “aura,” “postdrome” or “brain fog” while reading, but all these side effects have not been put in one place for readers to truly understand how big a toll migraines can take on the brain and body.

Side effects can alert us when a migraine is coming on, disable us for days at a time, interfere with our cognitive abilities, and make it extremely difficult to bounce back from an attack. Not everyone experiences all of migraine’s side effects, and severity varies from person to person. For me, the worst happen during the tail end or slightly after an attack, while others may have more difficulty with pre-attack symptoms.

Almost all side effects happen within the four migraine phases: prodrome, aura, attack and postdrome, with a couple outliers that can happen at any time. Here are the ones you need to know:

For migraineurs, the prodrome comes with the first batch of side effects. Prodrome can happen a few hours before an attack or even the previous day. It can be difficult to notice the symptoms, especially since many of them – like irritability, depression or euphoria – are associated with other disorders like depression and bipolar I and II. Other prodrome symptoms include drowsiness, food cravings and thirst. To best understand which side effects you experience during prodrome, a migraine diary can be helpful in tracking symptom patterns.

When the prodrome phase ends, the aura phase begins.

Aura is a sensory disturbance that signals the start of a migraine attack. These disturbances are different for everyone, but the most common is some sort of visual impairment, including vision changes, light spots, dark spots or colorful/shimmering spots. (Think about what happens when you shut your eyes really hard and then open them.) Aura can also appear through physical symptoms like headaches, nausea, skin tingling and light and sound sensitivities. Usually, migraineurs have about an hour to get ahead of the attack by taking acute medications and going to a controlled environment.

While all migraine phases suck, the attack is the worst of all. This is the phase associated with unbearable head and – sometimes – body pain. It’s the phase where getting out of bed seems impossible, looking at screens causes instant nausea and, oh yeah, the feeling of a vice getting tighter around your head or like your brain trying to burst out of your skull. The worst part? This feeling doesn’t go away from anywhere between 24 and 72 hours. During an attack, all you can do is curl into a ball, try to sleep away the pain and pray to every deity out there that the torture stops.

The pain has gone away, but you’re still not done. It’s time for the postdrome phase, which lasts about 24 hours after the attack ends. Enduring that much pain for extended hours takes a real toll on a person’s body, which is why the postdrome gives you that hit-by-a-bus feeling. During this phase, there is drowsiness, confusion, dizziness, continued sensitivity to light and sound, little energy and irritability. (Hey, we just survived an all-out assault on the body, of course we’re going to be irritable.) During this time, motivation is at an all-time low. The pain is gone, but the body is exhausted. Going into work a day after a migraine is always terrible. Working during postdrome can turn simple job responsibilities into impossible tasks. Your body and brain are just too exhausted to perform.

BUT THAT’S NOT ALL!

There are other major symptoms that can strike at any time, as migraines are a neurological disease that never goes away. Even when we are not in pain, we still have migraines. The disease is with us every day, affecting how we live and work. That’s why these symptoms randomly show up outside the four phases, because migraine is always in our brains. Here are the two most common side effects that can happen at any time.

Everyone can relate to this feeling. Think about how it feels when you don’t get enough sleep or when your brain has worked so hard that it has cashed out for the day. With brain fog, thinking and speaking are a challenge. For many migraineurs, brain fog can happen after an attack or randomly. But the majority of them happen after an attack, or the postdrome phase.

If you’re a regular reader (thank you, by the way!), you might have seen my column about how transient aphasia affects my career. Migraines and their side effects are crushing, but the aphasia that I live with might be the most heartbreaking. Transient aphasia is a condition that makes it difficult for someone to recall or comprehend words. It could be any word, no matter how often it’s used or not. It can also happen at any time. For people like me who have careers rooted in using words, transient aphasia is a bigger enemy than the attack itself.

When you combine the migraine attack with the aura, prodrome, postdrome, brain fog and aphasia side effects, the length of the attack can last for up to a week. That’s a big chunk out of your life, and especially more so for people who struggle with chronic migraines. So be gentle with us. We’re not just struggling with a headache; we’re struggling with so much more.