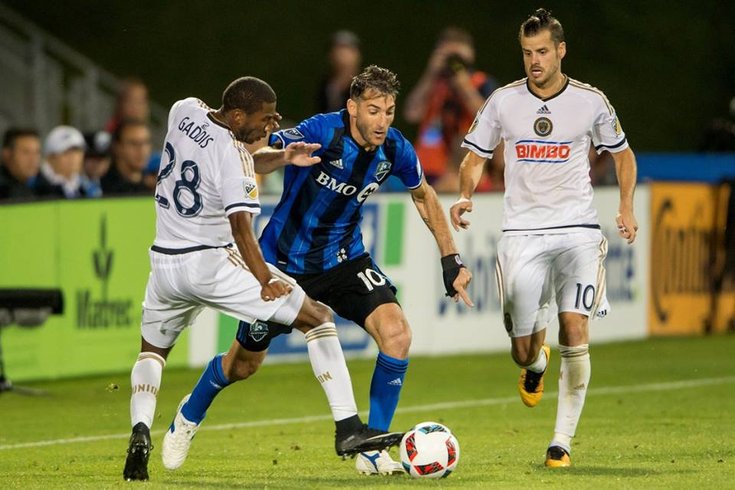 Ray Gaddis battles with Ignacio Piatti during the Union's 5 to 1 loss in Montreal on Saturday night.

Sometimes you burn the tape and move on.

Is this one one of those times?

There was a lot to forget about the Union's 5-1 loss on Saturday night, but there were also plenty of reviewable moments for a team that just hasn't been itself in recent weeks.

The loss was not unexpected, considering the fact that the Union played 120 grueling minutes on Wednesday night, then stayed in Boston on Thursday before flying to Montreal on Friday morning. That came on the heels of a spirited comeback at home on Sunday night. In total, that's 300 minutes of play over the course of seven days.

Jim Curtin didn't use the schedule as an excuse in his post-game comments, and he's correct to look at it in that way. The game was fraught with individual errors and poor communication that didn't seem to be the product of tired legs. This team has a high fitness level and has done well previously on short rest situations.

If anything, the Union should be disappointed that they didn't take advantage of a Montreal team that rolled out a piecemeal backline and midfield. With Laurent Ciman injured, Hassoun Camara deputized at center back, with left back Donny Toia sliding over to the right. Marco Donadel came off the bench and Patrice Bernier paired Callum Mallace in the defensive midfield.

What happened on the first goal?

The first Montreal goal was a bit of creative genius combined with a badly timed clearance attempt.

Richie Marquez is a guy who will make this play 999 out of 1,000 times. He'll be furious with himself for getting it wrong.

There's not a ton to talk about here. Josh Yaro is forced to slide over to pick up Ambroise Oyongo after Ignacio Piatti plays in the left back with a clever backheel.

Marquez is in a position to make a play, and Ray Gaddis is picking up a late run coming from the Montreal midfield. I don't think Gaddis deserves any blame here. The play happened very quickly, Marquez is in front of Drogba, and he just whiffs on the clearance. 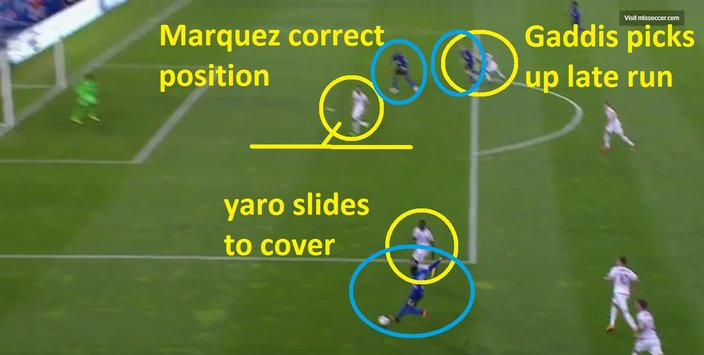 It's a great ball from Oyongo. It's a low cross and it's hit with pace. Gaddis isn't supposed to be on Drogba here and he's correctly identified Mallace's late run instead.

This is “bang-bang” play with a Union mistake.

What happened on the second goal?

This one was a tough pass with a lot of laziness from Tranquillo Barnetta.

No, it's not the greatest pass from Keegan Rosenberry, but Barnetta shows absolutely zero urgency to get to the ball, and he's beaten by 36-year-old Bernier.

When Piatti picks up the loose ball, Barnetta is slowly jogging back. He doesn't break stride at all as an unmarked Didier Drogba puts home the rebound.

It's really, really bad stuff from Barnetta, who is a lot better than that. 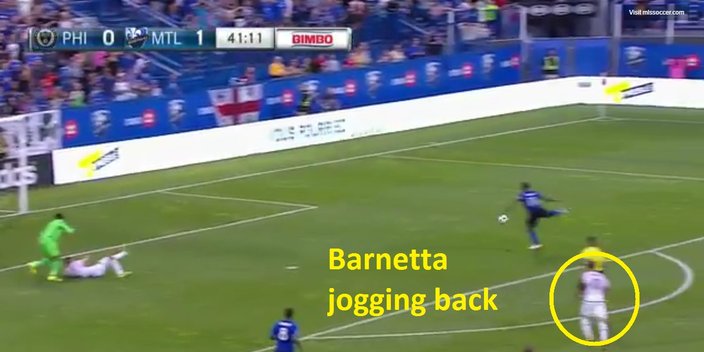 What happened on the third goal?

On social media, a lot of people blasted Gaddis for this one.

Ray does deserve part of the blame, but not all of it. There was a series of awful decisions leading up to the goal.

Watch the replay, and see how many errors you can spot.

First, Barnetta and Brian Carroll get caught upfield on missed challenges, which allows Bernier to easily split the lines and pick out Piatti in space.

Third, Josh Yaro fails to step and gets caught in no man's land while Rosenberry and Sebastien Le Toux track Oyongo on the left side of the field.

Fourth, Richie Marquez stays vertical with Yaro and doesn't even appear to see Drogba running in behind.

Fifth, Gaddis, who is attempting to pick up Drogba, pulls off to mark Michael Salazar instead. 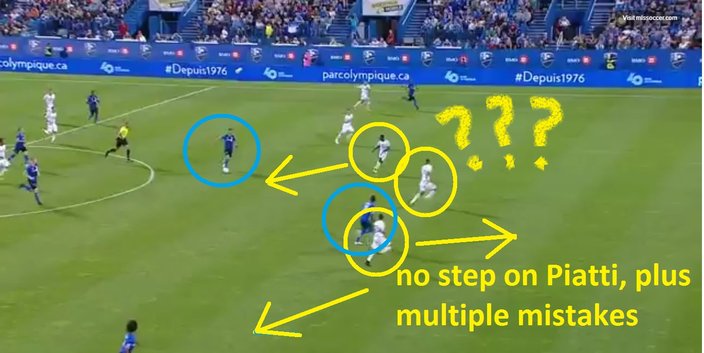 This is the best illustration I can come up with. The transitional defense is all wrong.

Let's start with Gaddis. Yes, he deserves criticism for this. Drogba is the danger man and he's closest to the goal. Salazar is in a wider, less threatening position. Gaddis started the play by pinching in and protecting the channel, so I'm not sure why he decided to leave Drogba to pick up the winger instead.

I'm not sure if Marquez is looking at Oyongo on the far side of the play. Maybe he's cheating to that side because he feels like Gaddis has Drogba covered. Marquez is clumped with Yaro, his back is turned to the goal scorer, and both center backs aren't even close to marking anybody.

Rosenberry is tracking back after letting Piatti go, but he's not in a position to influence the play. Le Toux is trying to recover. The defensive midfield line allows the transitional opportunity in the first place and they're completely out of the sequence.

There's a lot of wrongness here, but Gaddis got the bulk of the ire on social media. That's fine, as long as we're fair about the criticism and also point out what other players did wrong. If we're going to hammer Gaddis for his marking here, we also have to talk about Carroll, Barnetta, Rosenberry, Marquez, and Yaro.

That's too much for a target forward who only recently came back from an ankle injury. Sapong finished the game with just 23 touches and couldn't do much of anything against a shuffled defense.

In this one, he turned the ball over and took a number of bad touches.

Didn't see enough of the ball, then came off early in the second half. That seems to be the routine for Alberg in recent games. Philly needs to involve him more, and he needs to spend more time looking for the ball.

In typical fashion, you completely forgot that he was on the field until he popped up with that superb second-half goal.

More than anything, Barnetta needs to get back to his #10 spot, even if that means returning Alberg to the bench.

Barnetta just isn't getting it done as a number eight. He's not a deep-lying ball mover and he doesn't occupy the same positions that Vince Nogueira did. He doesn't have much of a defensive game. He looks somewhat annoyed in general.

He also needs to stop yelling at the referees, which has been going on for something like five straight games now.

Partially culpable for the third goal, but not a ton he can do in this game.

He took a ton of flack on social media but he was not the worst Union defender on the field.

I wouldn't say that Richie is “hard on himself” when he makes a mistake, but he's the type of guy who will get annoyed about the goal the team gave up in a 3 to 1 win. He's always looking to correct errors and improve his game.

Even though Yaro and Rosenberry are the rookies out there, we need to remind ourselves that Marquez is only 24 years old. He's still young and still has a lot of things he can learn. He made some mistakes out there that you don't usually see him make.

It's also clear that he's more comfortable with Fabinho playing left back, which is a “Captain Obvious” type of statement. The communication always changes when you're paired with another player at the fullback spot.

Not really culpable for the first goal, because he's sliding over to Oyongo after he gets by Rosenberry on the backheel. On the second, maybe he can help out more instead of leaving Marquez to deal with Piatti. On the third goal, he needs to step up faster.

On a bad day for Union defenders, he may have been the best of the four, which isn't saying too much.

Not a ton he can do on the first goal. It's just a beautiful backheel from Piatti to beat three players at once.

Later, he timed a perfect tackle on Piatti to snuff out a dangerous attack inside the Union box.

On the second Montreal goal, again, it's not the greatest pass, but Barnetta doesn't help the play with a casual approach and defensive response.

Offensively, Rosenberry was limited. I don't think he even hit a cross until the 81st minute.

He made a big save on Piatti, only for Drogba to boot the rebound into an empty net for the second goal.

A frustrating night for Blake, who was hung out to dry by the other 10 guys on his team.

There was a good ball across the box that gave the Union a chance to cut this to a 3-2 scoreline.

Yeah, he looks good as a withdrawn striker, but that's the best spot on the field for both Alberg and Barnetta.

Had a half-chance on the Restrepo cross that came in.

By PRO standards, he was fine.