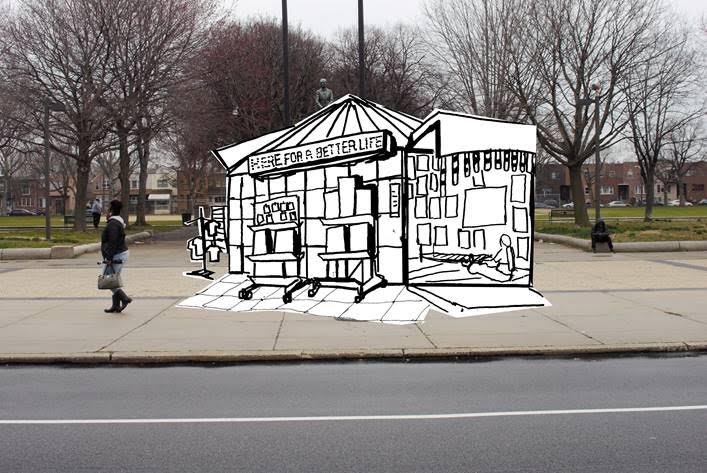 Free Speech, Shira Walinsky & Southeast by Southeast–A fully-functioning newspaper kiosk filled with books, papers, artwork, photos, and maps made over the past five years with refugee communities in South Philadelphia.

Out of all the projects trying to get some funding out there, one Philadelphia idea is getting the special treatment.

Mural Arts Philadelphia's project, Monument Lab, is featured as Thursday's "Project of the Day" on Kickstarter, the popular crowdfunding site.

Monument Lab is a citywide public art and history project that will feature 21 temporary works in 10 locations from 21 artists in the fall.

Mural Arts announced the concepts and locations for the projects just last week.

This fall, Philadelphians will see a wide range of ideas come to fruition, including a "new immigrant" monument near City Hall by artist Tania Bruguera, as well as a take on the absence of women in Philadelphia's monuments by artist Sharon Hayes to be displayed in Rittenhouse Square.

So far, the Kickstarter campaign has raised more than $12,000 of its $50,000 goal. It's an "all or nothing" campaign, meaning that the organization will only be funded if it reaches its goal by June 1.

Kickstarter's "Project of the Day" is chosen by a special team that works to highlight "exceptional" campaigns in hopes of spreading the word, according to Kickstarter's FAQ page.

"It's an honor to see Mural Arts Philadelphia’s Monument Lab fundraising campaign featured so prominently on Kickstarter and to see it getting pushed out to national and international audiences," said Nicole Steinberg, director of communications and brand management for Mural Arts. "We're excited to use the Kickstarter platform to reach a diverse and widespread audience, who get to be engaged in the creation of public art when they might not otherwise have the opportunity to get involved at this stage of the creation."

Watch the video used for its Kickstarter below and check out the campaign here.