Hey ladies, try being nicer to the men in your lives

This morning, my iPhone lit up with a news alert that totally grabbed my attention. That it came from Fox News is an afterthought; it was all about the message therein.

Unlike most push alerts – where reading that condensed message qualifies as “understanding” the story – this one warranted a click, primarily because I – like many of you, apparently – just don’t buy it.

And boy am I happy I did!

This assertion comes not from any sort of polling data (and real talk: even that wouldn’t prove definitive as we learned last last year.) 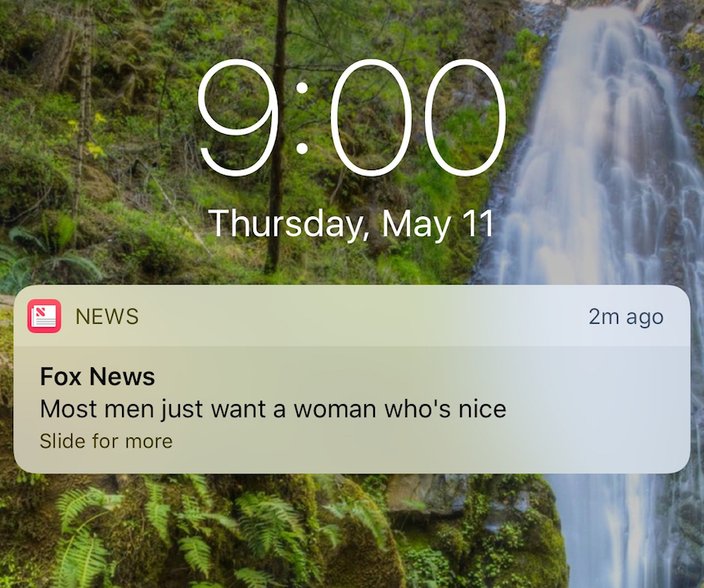 Rather, it’s a “think” piece of sorts from an author named Suzanne Venker who, according to the article’s tagline, “is known for her provocative views on men, women, work & family.”

Let’s grab some popcorn and examine a quartet of excerpts from the 500-word piece, shall we?

“Nice,” to a man, means being soft, gentle and kind. It means asking your husband how his day was and really listening. It means doing something nice for him with no expectation of getting something in return.

A lot of women think they’re nice because they act nice. But acting nice and being nice are two different things. Being nice means you think of others before you think about yourself.

Don’t women want the same thing? A man who’s nice? Not exactly. Most women do want a man who’s kind, but that’s not the same as nice. Ask any guy you know, and he’ll likely give you example after example of women they know who said they wanted a nice guy but in reality wanted a bad boy.

Most husbands have no desire to lord over their wives, but they don’t want to fight with them either. All they want is peace. And the nicer you are, the more likely they are to find it.

There’s a lot to unpack there, aspiring nice ladies and their bad boys.

My initial impression? The author’s basically telling the straight ladies of the world to kiss their straight man’s buttocks without so much as a hint that the women of the world deserve niceness in return. (Be the bad boy they really want!)

This, even though there was the fig-leaf qualifier that “being soft, gentle and kind does not mean you have no life or opinions of your own.”

Maybe there’s a gaggle of ladies out there that need this sort of casual reminder that their man’s the king of the castle and you should make sure they know that each and every day.

But I suspect there’s a whole lot of females out there who have a more valid interpretation of Venker’s lecture than I ever could.

So, help me out here: Give the screed a read and then let me know whether you think Venker’s right, or if this going to become yet another totem in the gender wars of America?