People can get the backstories on public art in South Philly, Center City and Germantown 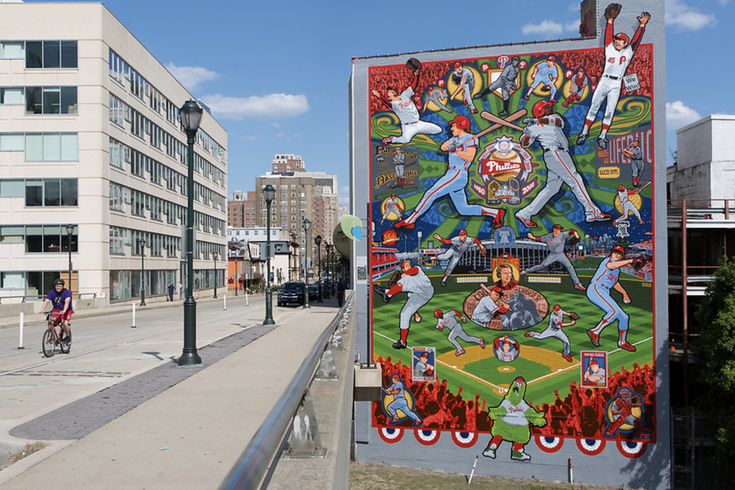 Mural Arts Philadelphia is hosting three new neighborhood walking tours this spring in Center City, Germantown and South Philadelphia. Above is 'The Phillies Mural' by David McShane, at 2400 Walnut St.

As the weather starts to warm, Philadelphia residents are beginning to spend times outdoors again.

Tickets cost $25 for adults and $18 for children ages 12 and younger. Each tour option was selected to showcase the best (and often the most historical) pieces of public art in the neighborhoods.

Each tour lasts approximately 90 minutes, and has a limited number of spots available. They each begin at 2 p.m. on their respective dates.

This tour highlights the smaller, often hidden murals on small buildings and walkways in the neighborhood.

Guides will share the history behind the murals, set in the context of the community as a whole. Some of the highlights include "South Philly Musicians Remix" by Eric Okdeah and "Watchtowers" by Joe Boruchow. The tour ends at 12th and Morris streets.

There are additional dates for the South Philly tour on April 3, April 30 and May 21.

Beginning Sunday, people can take a walk through Center City with "Mural Mile Center City West," a tour that focuses on the sprawling murals that cover some of the busiest sections of the city.

The tour will begin at 18th and Market streets and take guests through Rittenhouse Square and to the Schuylkill River. Guides will tell stories of the city's history and its leaders — both past and present. They will showcase the history of public art in the city as Mural Arts approaches its 40th birthday.

Highlights include the Phillies Mural overlooking the Schuylkill River Trail, as well as "Untitled" by Momo, which spans 12 stories of office towers on Market Street. The tour begins at the Sonesta Hotel and ends at Rittenhouse Square.

There are additional dates for the Center City West tour on April 2, April 24 and May 15.

On Saturday, March 19, people can take a stroll through Northwest Philadelphia for a tour of "Historic Germantown." The tour will begin and end in the vicinity of Bobbie's Coffee and Books, at 5445 Germantown Ave.

The Germantown walking tour will focus on public art as a form of community engagement, using the neighborhood's murals as stepping stones toward urban development.

Guides will discuss the history and significance of Germantown as it relates to the story of Philadelphia as a whole. One of the highlights is "Growing Up in Germantown" by Ann Northrup.

There are additional dates for the Germantown tour on April 10, May 8 and May 28.

People who would rather take their time can take a self-guided tour of any of the murals in the city. The "Engage By Cell" self-guided tour is easy to start, and has no time limit. Simply text the word "MURAL" to (215) 608-1866, and using your phone's GPS system, a map will appear with different murals around the city.