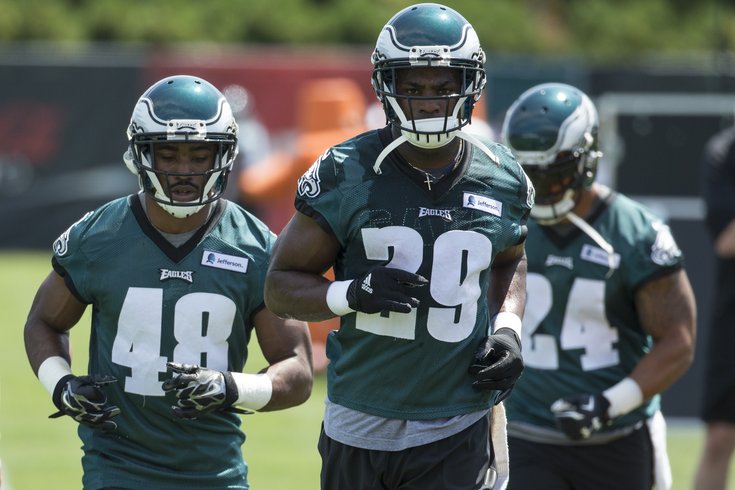 UPDATE [2:10 p.m.] - DeMarco Murray was limited in Friday's practice, much like he was on Sunday. He was out there in pads and a helmet watching, but he did not participate in the team drills. After practice, Murray was not available to the media, but it's likely the team decided to limit him after he sat out Thursday with an illness.

Two of the newest Eagles, running back DeMarco Murray and linebacker Kiko Alonso, were noticeably missing from Eagles practice on Thursday.

Murray, who also missed Sunday's practice after failing a daily hydration test, was sidelined with an undisclosed illness, while Alonso was out with a concussion, likely suffered in Tuesday's open practice at the Linc.

On Friday, one of those players returned.

Murray -- he missed two of the team's first four practices -- was back out on the field at the start of practice, but not Alonso. There has been no update from the team on the severity of his concussion, nor has a timetable been given for when the linebacker could return to the field. Given that he is coming off a torn ACL -- and with the first preseason game against the Colts still over a week away -- it seems foolish to rush him back out to the practice field.

In addition to Alonso being out, it appears tight end Zach Ertz, linebacker Mychal Kendricks and safety Jerome Couplin are being held out of practice on Friday. Both players were out on the field watching, but neither was in pads.

UPDATE [12:10 p.m.] - Murray may not be a full participant in practice, as he was stretching with Ertz and Kendricks instead of running drills with the rest of the running backs, but we'll keep you updated on that as it progresses.

Demarco Murray in pads but not working with RBs. He's stretching with trainer and guys not practicing. Ertz and kendricks #EaglesTalk