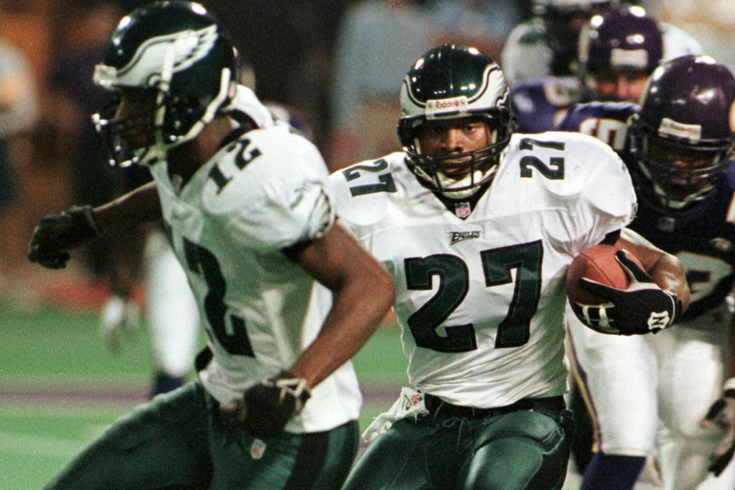 Philadelphia Eagles running back James Bostic (27) follows the block of wide receiver Na Brown (12) for a nine-yard gain during the fourth quarter Thursday, Aug. 26, 1999 in Minneapolis. The Vikings beat the Eagles 17-13.

If you aren't familiar with the yearly "Na Brown Award," it is the title awarded to the Eagles player who comes out of almost nowhere to cause a big stir at camp and raises his expectations unreasonably high in the process. Back in the early Donovan days, Na Brown was a camp stud who got a lot of hype but ultimately failed to live up to his heightened expectations.

It has become somewhat of a negative thing to earn, because more often than not, the hype eventually turns the player into a disappointment. But for now, it means one thing ... that the player is doing good things and getting noticed.

That player early in 2015 camp is undrafted free agent CB Denzel Rice, who has played well through the first four practices. Here's what we wrote about him in one of our post-practice notes posts:

Rookie undrafted free agent Denzel Rice had a big day. On one series, Tim Tebow took off running, and Rice punched the ball out for a fumble, then recovered it. On the next play he broke up a pass by Tebow. He also later had another pass breakup, which the Eagles' staff loves. Rice had 22 pass breakups the last two years at Coastal Carolina. If he were drafted, that would have tied him for 4th in PBUs among cornerbacks that were drafted this offseason.

Rice thought he would be drafted. "Going into the draft I knew I was going to be a later round pick," said Rice, "so I just kind of waited my turn, and (the Eagles) said it was unfortunate, but they tried to fit me in where they could."

Rice generated interest from a number of teams around the league after the draft concluded during the undrafted free agency phase of the draft. When asked why he chose the Eagles, Rice said, "Because of the relationship we made. After my Pro Day they started contacting me, and we just built a great foundation with each other."

Kelly noted that there seem to be defensive backs every year who go undrafted, but contribute immediately. "Malcolm Butler was a guy last year for the Patriots that no one drafted and ended up making the key play in the Super Bowl. It happens all the time. Why, I don't know, maybe (Rice) was at a little bit smaller school. He was a guy we were very excited about when we got the evaluation."