My one-on-one with 'Mr. Warmth'

Don Rickles had no filter. Interviews with the comic legend, who passed away Thursday at 90, were even more unpredictable than his performances. About 20 years ago, I was mugged in front of my art museum brownstone. A few days after the incident, I interviewed Rickles and I gave him some details.

“Were they black?” Rickles asked.

Who else would ask that question in a politically correct era? Rickles had recently been carjacked and he chronicled the experience.

During another interview, I asked Rickles if he ever returned to his old Jackson Heights neighborhood in Queens.

“No, do you know what they call Jackson Heights now? Haiti.”

Rickles, much like such comic icons as George Carlin and Rodney Dangerfield, didn’t care what anyone thought.

When I asked if he and his longtime best friend, Bob Newhart, ever strolled out of the casino during their runs in Atlantic City, Rickles laughed.

“There’s no way I’m going out there and getting rolled,” Rickles said. “That boardwalk is dangerous.”

Rickles was always cracking wise. When I mentioned Newhart and his run of sitcom success, Rickles rolled his eyes before a show in Atlantic City.

“Newhart has more money than anyone,” Rickles said. “The difference between me and him is that when I pick up the newspaper, I’m looking at the sports section to see how the Dodgers did and he can’t get off of the stocks page. Some people have all the luck.” 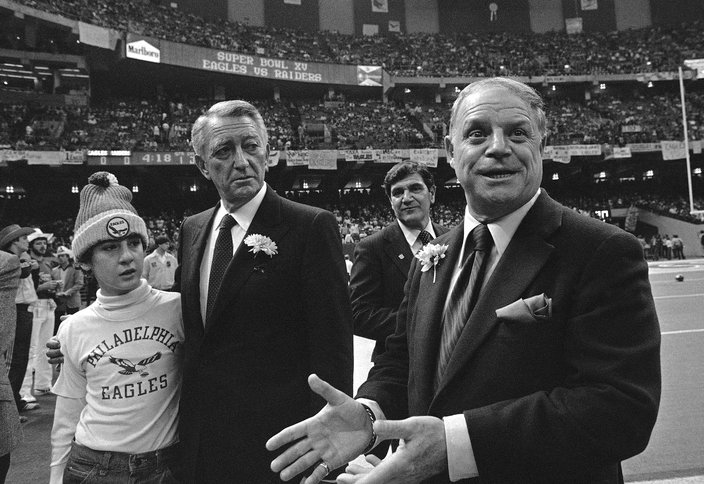 Comedian Don Rickles on the sidelines of the New Orleans Superdome with Philadelphia Eagles owner Leonard Tose prior to Super Bowl XV on Jan. 25, 1981.

Rickles was very fortunate. The caustic comedian had an incredible career. Rickles was not just a legend but he could mess with Frank Sinatra without fear of reprisal.

“Make yourself comfortable, Frank, hit somebody,” was one of his most famous lines, which cracked up the Chairman of the Board.

Insults were utilized by Rickles like bullets are used by snipers. “Don Rickles is my biggest influence,” insult comic Lisa Lampanelli said. “He is the greatest comic.”

Rickles enjoyed some sitcom success with “CPO Sharkey,” and had his moments in film – “Casino,” and in particular the animated “Toy Story” films.

“What’s great about those 'Toy Story' movies is that it’s what my grandchildren love,” Rickles said.

Rickles enjoyed playing characters onscreen but stand-up was his passion.

“That’s what paid for everything,” Rickles said.

“My jokes paid for the house, the cars, and everything. All of the movies and television shows were a bonus.”

When I asked Rickles last year about retiring, he laughed.

“Retire to what? I will perform until I die. It’s not like what I do requires heavy lifting. I’ll pick my spots and perform until it’s over for me.”