Mychal Kendricks was a disaster against the Lions, with gifs and stuff 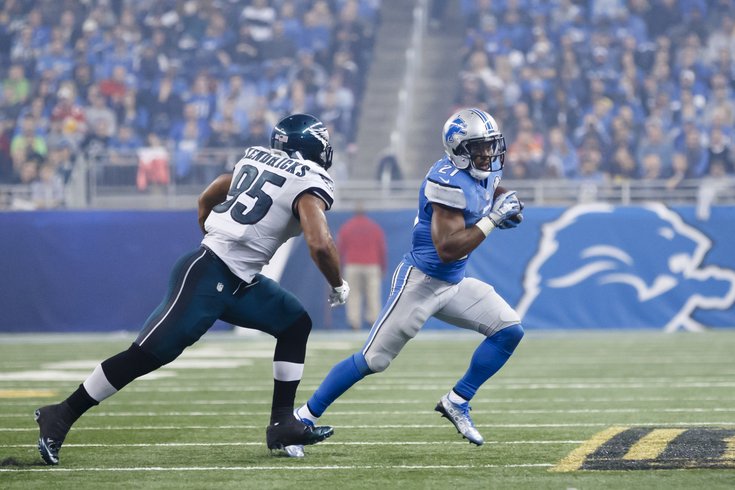 "95 is on the field! Quick, snap the ball before they change their minds!"

Prior to the Philadelphia Eagles' 2015 season, Mychal Kendricks signed a four-year contract extension worth $29 million. At the time, in his previous 16 games -- the final four games in 2013 and the 12 games he played in 2014 -- Kendricks racked up 115 tackles, 7 sacks, 5 forced fumbles, and 2 interceptions.

He now looks nothing like the player Cris Collinsworth fawned all over on Sunday Night Football once upon a time.

Against the Detroit Lions this past Sunday, Kendricks was a hot mess. In total, he was on the field for 26 snaps, three of which were kneel downs. It just felt like a lot more than that because he had so many bad moments.

It started off on the first drive, when the Lions found the matchup of Theo Riddick vs. Kendricks that they took advantage of all day on Thanksgiving a year ago. Riddick was Stafford's first read on this play, which the Lions executed with ease.

That's like taking candy from a baby, and really, it's a matchup that Jim Schwartz probably should have known the Lions would look to exploit.

The next five plays we'll show were all on the Lions' third drive of the game. This first one is egregiously bad football.

Here, the Lions face a 3rd and 11. Matthew Stafford doesn't like what he sees down the field, so he checks it down to Riddick. That's a surrender, and should be an easy win for the defense. Nope. Instead of having a shred of awareness knowing that Riddick needs nine yards after the catch to make the first down and playing contain, Kendricks comes in hot and completely whiffs on the tackle. This isn't even much of a move. It's not like Theo Riddick is the next Barry Sanders:

Riddick gets 10 yards, the Lions go for it on fourth down, and get it. Drive continues. Brutal.

Later in the drive, the Eagles are in some sort of man-zone combo coverage. Based on the reactions of Stephen Tulloch and Ron Brooks (who both stay home) on the right side of the field here, it appears as though Kendricks leaves his zone responsibility to chase Marvin Jones across the field. Anquan Boldin runs into the area of the field vacated by Kendricks, bailing out Stafford who is scrambling under duress:

Later in that drive, once again, the Lions picked up 19 yards on a screen play to Zach Zenner. We won't go and blame this play on Kendricks, who actually made the tackle down the field, but just watch how slow he is to recognize screen here:

Here's more slow recognition on the same drive. The Lions run a draw to Zenner, who would have blown right by Kendricks if not for great alertness and reaction by Brandon Graham:

Once again, on the same drive, Kendricks makes the wrong read. On this play, he has help to the inside, and should be forcing the play back toward the middle of the field. Instead, he tries to avoid the block to the inside, where he and Malcolm Jenkins collide, opening up a lane to the outside.

Jenkins screamed at Kendricks after this play. This should have been a two or three yard gain. Instead, the Lions get eight down to the one-yard line.

And finally, in the fourth quarter, on a huge fourth down play, Kendricks has a chance to wrap up the ball carrier, who no longer has any momentum, and throw him back toward the line of scrimmage. I don't even know how to describe what this is...

Opposing offenses are going to easily identify Kendricks as the weak link on the Eagles' defense, and try to attack him with regularity when Jim Schwartz puts him on the field.