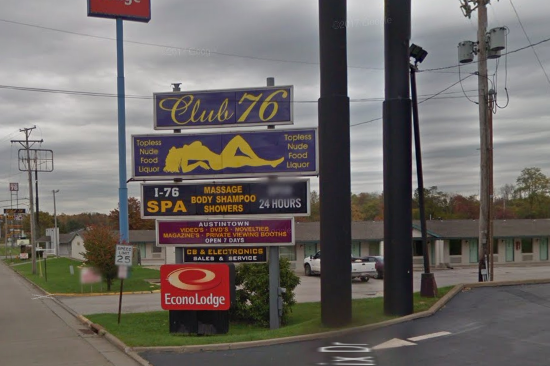 Google is an unforgiving beast.

You may have heard, but there's growing interest in seeing the Sixers play this year, as the franchise sold a franchise-record and league-leading 14,000 season tickets by late June.

In order to accommodate the demand, the team launched Club 76. Basically, if you pay the Sixers money, you get priority on the waiting list. It's free to join, but $76 puts you in the middle of the pack and $176 puts you at the top, with perks like hats and T-shirts to boot.

Void of the funds to buy priority but still interested in joining the list, I googled "Club 76" to see how to get the free option.

The first four results are of the Sixers' new deal. However, the rest of the results on the first page, including the business listing on the right-hand side, is for Club 76, a truck stop strip club in Youngstown, Ohio.

Thing is, if the internet is going to associate your season ticket club with a strip joint, you'd at least want it to be one with good reviews, right?


Well, the Yelp reviews are mixed. One reviewer who took issue with the talent of the dancers gave it three stars and wrote: "It's boring but you can just chill and have a beer."

Another less satisfied customer gave one star and wrote: "Will I go back? Hell NO!!!!!" One happier patron said the drinks were cheap, the food was tasty and the music was good, giving it four stars.

The sign luring drivers on Seventy-Six Drive in Youngstown advertises a spa that includes showers, massages and "body shampoo." It's doubtful the Sixers' Club 76 offers any of those.