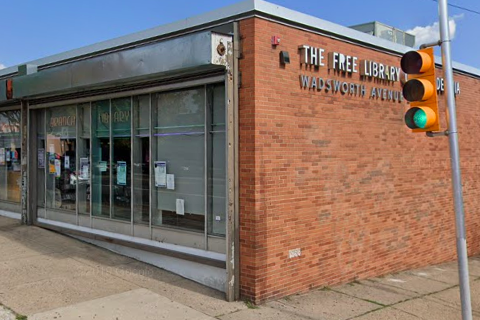 Free Library of Philadelphia employees launches a petition after city officials allegedly allowed the National Guard to stay at the Wadsworth Branch in Northwest Philly.

Employees of the Free Library of Philadelphia have launched a petition urging city officials against housing the Pennsylvania National Guard at its branch locations, saying it runs counter to its support of the Black Lives Matter movement.

The petition was launched after the Philadelphia Office of Emergency Management allegedly instructed the Free Library to unlock the Wadsworth branch in Northwest Philly last Wednesday for the National Guard.

The National Guard has been deployed to the city to assist with demonstrations sparked by the police killing of George Floyd.

Perry Genovesi, a music librarian at the Free Library of Philadelphia, posted the online petition, which had collected nearly 2,000 signatures by Tuesday evening. The petition claims to be on behalf of the library's union and non-union workers, and community members upset at the welcoming of the National Guard.

"The Free Library is no place for soldiers who shoot rubber bullets, tear gas and flash bangs at people demonstrating against the police murders of George Floyd, Breonna Taylor, David Jones, Tony McDade and so many others," petition reads.

Housing National Guard members at libraries runs contrary to the messages the library has posted on its social media channels and betrays the community, the petition claims.

"The OEM’s directive reverses decades of trust from our communities," the petition reads. "It reverses our publicly-stated support for the Black Lives Matter movement."

The petition was addressed to OEM Director Adam K. Theil. OEM did not respond to a request for comment or provide an update on the housing of the National Guard.

The petition received attention after being posted by the founder of Library Freedom, a New York-based advocacy group focused on data privacy and training for libraries.

librarians in Philadelphia are furious that the city is harboring the National Guard in one of our free libraries!!! sign this petition and demand their removal https://t.co/q6HITRVe4i

Free Library branch locations and many of their services have been closed to the public for weeks due to the COVID-19 pandemic. They will remain closed indefinitely, according to a message Director Siobhan A. Reardon posted Monday. Updates to library services will be posted here.

Mayor Jim Kenney ended the city's curfew Sunday, which had been imposed eight days in a row. But National Guard remains stationed in the city.