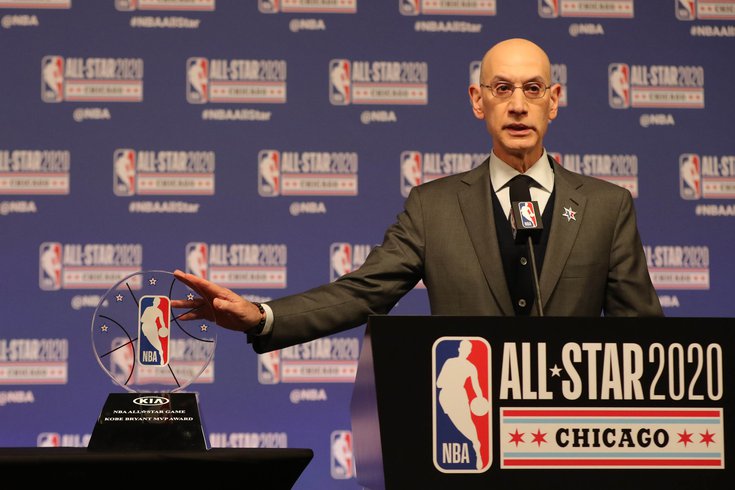 With sports temporarily suspended across the United States and the rest of the world, NBA commissioner Adam Silver proposed a few potential options for basketball to return in the near future, including an exhibition proposal that would bring together a small group of players in the interest of giving people at home something to distract them from the current pandemic.

Silver, who conducted a nearly 30-minute interview with ESPN's Rachel Nichols on Wednesday night, said that the league feels a certain responsibility to give the public something to hold onto during a trying time. He revealed a scenario that would involve not necessarily bringing the league back, but bringing basketball back in some capacity:

A third option we’re looking at now, and I would say all suggestions welcome…one of the things we’ve been talking about, are there conditions in which a group of players could compete? And maybe it’s for a giant fundraiser, or just for the collective good of the people that you take a subset of players, and is there a protocol in which they can be tested and quarantined or isolated in some way, and then they can compete against each other?

The commissioner would go on to say that the league understands that they are in a position of influence, as the suspension of their season accelerated decisions by other leagues and businesses around the country, saying that the flipside of that is knowing they may have to lead in terms of a return to action.

This scenario, though, is unlike anything we've heard to date. Would it be an All-Star type collection of players, assembled from all around the country? Would it be from teams in pockets of the country that have been least impacted by the spread of the virus? And who, at this point, is even safe to participate in such a game? Silver revealed that eight full NBA teams had been tested for COVID-19 since the league had been suspended, which leaves over 2/3 of the league as unknowns at this stage of the process.

From a pure entertainment perspective, it would be terrific theater. You could have captains pick teams like an ordinary pickup game, listen to players talk trash in a gym without crowd noise and thumping music, and see what these guys look like in an environment none of us have ever seen them in before. Watching Joel Embiid in a game where you can hear him laying into the opponent would be a heck of a lot of fun.

Of course, there are a million reasons that sort of game seems unrealistic. Players risking injury for a "meaningless" game is always dicey, and then you add the legitimate health concerns attached to any sort of game in the near future, and there will be a lot of teams who go quickly into "protect our investment" mode. Many teams are happy to see their players stay home for the Olympics, let alone an exhibition game with no real stakes, so pushback would almost certainly come from some corners of the league.

The more interesting bit of the interview, at least as someone who covers the league, was Silver's answer to a question about potentially shifting the schedule long-term after adjusting it to work in the short-term. He would not commit one way or another, but with a return this season likely pushing games deep into the summer, he did not write off the possibility of moving their start date to around Christmas.

Possibly. Those are things we’re always talking about, whether they’re executives at your company, ESPN, or at Warner Media, together with our regional sports networks. I will say the conventional media calendar has changed so much certainly since I got into this business. Primetime means something very different than they used to, now that people essentially carry around televisions with them in their pockets. The summer is viewed differently than it was historically from a television standpoint. Regardless of whether we had been going through all this, it’s something the league office together with our teams has been spending a lot of time on.

It's a proposal that has always made sense on some level — football dominates the landscape from training camp through early February, with most people only really diving into the league once the Super Bowl has come and gone. Since the NBA's signature day is on Christmas as it is, starting around that time would give them a huge platform to launch a new season. Obviously, you wouldn't want a health crisis to be the reason they finally pushed in that direction, but necessity is the mother of invention, or so I've been told.

The major takeaway from the interview is that the NBA is prepping for an extended absence, operating under the same cloud of uncertainty the rest of us are. So until you hear otherwise, prepare to watch old games or find other things to do with your time...for now.