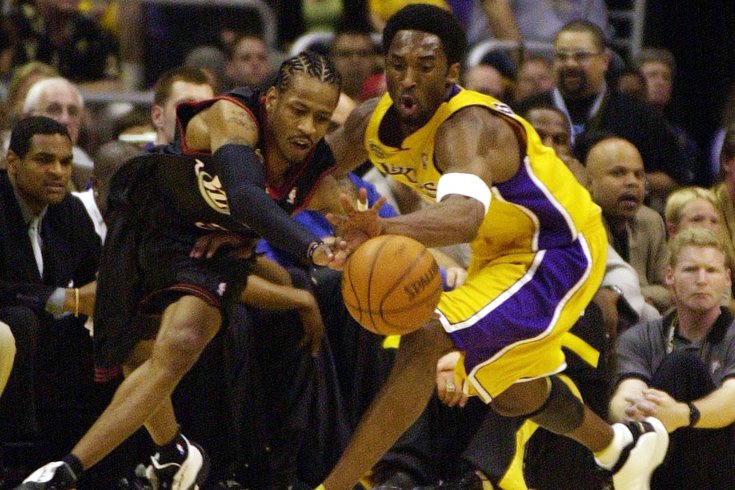 Sixers guard Allen Iverson, left, and Lakers guard Kobe Bryant scramble for the ball in the first quarter of Game 1 of the 2001 NBA Finals.

One of the first things that came to mind when the NBA suspended the season was, "Wow, a lot of nights just freed up." The second thought, at least for me, was, "How exactly are you going to spend that time and continue doing your job?"

Since I'm a creature of habit, the instant observations will live on. But there will be a retro twist — we are going back to the 2001 NBA Finals to start, looking back at the last time the Sixers had a real chance to win an NBA title.

The goal will be for all of us to watch these games together, using the same YouTube video (which I will provide here and/or on Twitter the day of) to follow along each night, complete with all the trappings of an early 2000's NBA broadcast on NBC. We'll get to hear Marv Albert before he started regularly losing sight of the three-point line, Doug Collins before the city of Philadelphia turned on him, and relive what it was like when the Sixers were nearly on top of the world, if not for the early 2000's Lakers juggernaut.

Once the game has concluded, the observations column I do for new games will go up for our game of the night, and we can talk about the memories of that Finals run together.

Re-watching the series during a dead period of last summer, I was struck by how many moments from that series I had forgotten over the years. In fairness, I was just a kid when that series took place, and 19 years will warp the memory of just about anyone. But I think that will be the case for a lot of people, who remember that series for Game 1 and Allen Iverson's stepover, wiping away the four games the Lakers won consecutively after Philly's upset win.

The rules for the time being — we stick to weeknights where the Sixers would have played a game if not for the suspended season, leaving weekends and off nights for everyone to be as social as they can be during a pandemic. Our tentative schedule follows (all times are East Coast):

This sort of deal only really works if you're all ready and willing to participate, and you can help in a couple of different ways beyond watching (and sharing, of course).

With everyone making plans for their non-sports time in the weeks to come, I understand people will gravitate to an assortment of hobbies, so I am open to suggestions on moving the times one way or another, within reason (let's say within that hour window). But unlike normal NBA games, we will begin our YouTube journeys at the exact time that is settled on. 7:30 p.m. means 7:30 p.m.

If the suspension of the NBA season drags on and there is enough interest in this series, I am also open to revisiting other games based on crowd suggestions, with the only qualifier being that they have to be available in full on a service everyone can access for free.

If you want to re-experience Game 7 heartbreak from last year for some reason, or one of the rock fights from their unexpected 2012 playoff run, or even rewatch one of the games from earlier in that 2001 playoff run, let me hear your suggestion(s). Hell, I'm even open to observations for new or old episodes of TV if you'd rather ditch sports altogether and that's what you all are into.

Beyond that, your participation is all that's really needed. I won't be on the go as much (to say the least) with the schedule screeching to a halt, so I'll have more time to have some beers, relive the games, and participate in comment sections to Embrace Debate.

Will you, the people, sign up to sit down and watch games you know the result of ahead of time? Who knows! But the 2001 Finals were a little tighter than I think some remember, and it'll be fun to run it back — even if the Sixers failed to do so last summer.