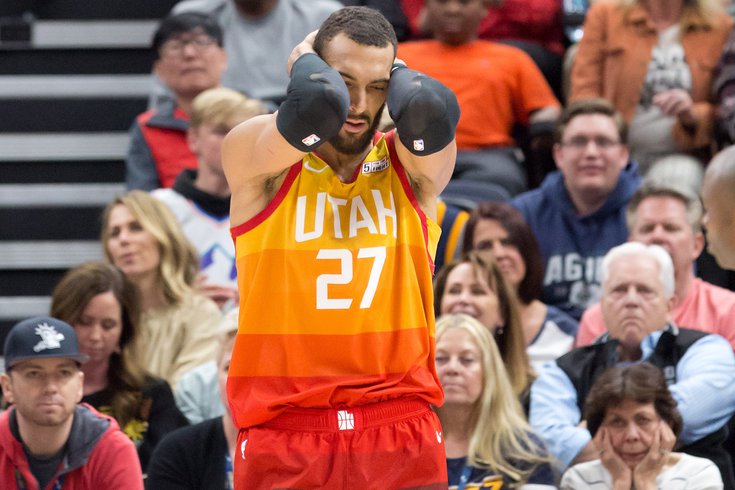 Rudy Gobert tested positive and the NBA postponed the season. What a wild night.

The NBA has suspended the 2019-20 season until further notice, after Jazz center Rudy Gobert tested positive for coronavirus on Wednesday evening.

The NBA announced that a player on the Utah Jazz has preliminarily tested positive for COVID-19. The test result was reported shortly prior to the tip-off tonight between the Jazz and Oklahoma City Thunder at Chesapeake Energy Arena. At that time, tonight's game was canceled. The affected player was not in the arena.

The NBA is suspending game play following the conclusion of tonight's schedule of game's until further notice. The NBA will use this hiatus to determine next steps for moving forward in regard to the coronavirus pandemic.

This verdict was handed down mere minutes following the Sixers' win over the Detroit Pistons win on Wednesday night, and as a result, no Sixers players were made available to speak to reporters about the situation following the conclusion of the game.

Head coach Brett Brown and GM Elton Brand spoke briefly with reporters following the conclusion of Wednesday's game. A Jazz player testing positive for coronavirus is relevant to the thousands of people who were in the arena for that Pistons game, with Detroit having played Utah over the past weekend.

Asked what they would do as an organization in response, Brand was shellshocked like most of the rest of us.

When asked whether they believed it was responsible for the Sixers to have played a game in front of their home crowd given the circumstances, Brand opted to let Brown answer for the organization.

"If you follow the league and you have to have faith in the league, and we do, Adam Silver is an amazing leader, we’re a part of this NBA brotherhood, and the instruction was to come in and play the game," Brown said. "If you look at the proactive measures our club has taken and our league has taken, and that the league has taken, I think they should be applauded.

"It’s a sensitive situation obviously, it must be a very serious situation for the league to make the decision they have made, and we look forward to learning more over the, you know, next few hours really...we’ve only as an organization just learned about this."

Following the league's mandate or not, the Sixers' organization, was given ample time to make changes based on suggestions from health experts locally and nationally.

Philadelphia's public health department recommended on Tuesday that locals should not attend events with more than 5,000 people. The Sixers, who play in an arena that holds nearly 20,000 people, used the opportunity to point out that they were not actually given a mandate by the city.

"We are aware of the recommendation offered today by the Philadelphia Department of Public Health," a Sixers team official told PhillyVoice on Tuesday evening, "which included no mandates to postpone or cancel events, so there are no changes to our game schedule at this time. We will continue to monitor the situation, in coordination with the NBA and Wells Fargo Center."

One day later, the NBA season is on the brink.

More information will be provided in this space as it becomes available.