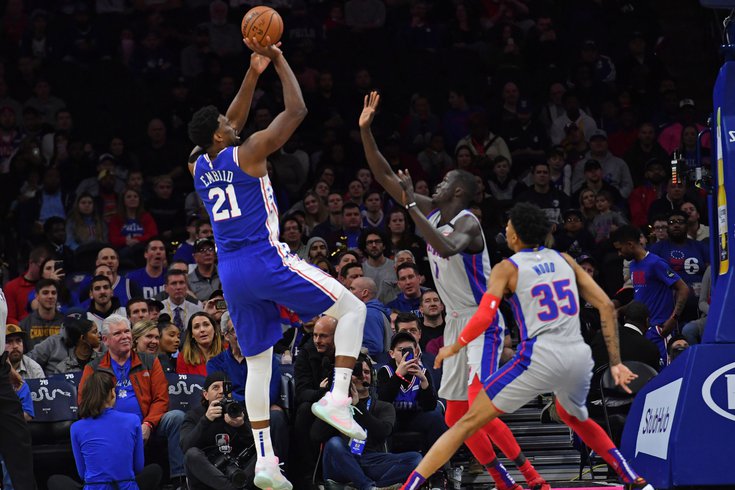 Joel Embiid puts up a shot against the Pistons.

With the threat of coronavirus hanging over the world, the Sixers played what will almost certainly be their last game in front of fans for a bit, comfortably outpacing the Detroit Pistons in a 124-106 win.

• Early on, Joel Embiid didn't have the look of a guy who was set to dominate the Detroit Pistons in his first night back. Embiid got down the floor in transition, set up in early post position, and mostly looked at home with a group that has been getting by without him over the last week-plus, but he wasn't outright dominating the game in the early stages.

But what Embiid did on Wednesday was perhaps even more important than delivering a quick haymaker. The man who so often crushes in first halves and fades down the stretch put together a comprehensive performance, wearing down the Pistons and slowly working his way to 30-14 in his first game back.

His presence was a nice boost on both ends, but mainly on the offensive end, where the Sixers finally had a guy who you could dump the ball to and expect to either score, get fouled, or draw a double team. That's a powerful thing, and though Embiid's reads out of double teams were a little rusty his first night back, he managed to avoid having a disaster class.

When you consider that he was coming back from an injury that theoretically makes it harder for him to bang bodies in the paint, it was encouraging to see him playing with a level of physicality and embracing contact. Though he would end up picking up a technical foul for flexing at and jawing with the much smaller Brandon Knight, that's the sort of attitude he has been missing during his down stretches this year.

Without Ben Simmons alongside them, the Embiid-Horford frontcourt even showed some signs of life, with the two connecting on a couple of nice inside-out plays against Detroit's sporadic use of zone defense.

You all will have to tell me — did Embiid look springy out there, or was it a combination of rocking white shoes and having a new haircut? Back before I was a washed-up former athlete, I always felt like I looked faster when I rocked lighter-colored shoes, so perhaps my brain is just tricking myself into believing Embiid was sprier than he actually was.

Bottom line is that he looked real good, and they need him to sustain this moving forward. If the NBA continues to play games, anyway.

• It helped Embiid, of course, that Horford continued to shoot the basketball well following a strong close to the west coast trip on the offensive end. I had been banking on a Horford resurgence from three for most of this season and had basically completely given up hope on him rebounding by the time the playoffs rolled around. Joke's on me, idiot!

Horford won't have as much room to operate when Simmons eventually (hopefully?) returns, but for the time being, the Sixers have been able to lean more on him as a multi-talented piece on offense. They're playing through him in the post, and his passing has been a bigger asset in recent weeks than it has been at any other point this year.

• It's hard to forget how important Josh Richardson is for this team when he misses time due to injury. Though they were able to make up for the offensive impact of their injured players out west, the guys who stepped in to fill the void all come with pretty significant defensive warts. Richardson may not be on Simmons' level there, but he's an upgrade over the rest of their point-of-attack defenders at the very least.

With Shake Milton now in the mix, it allows Richardson to settle into an offensive role that suits him better than running pick-and-roll after pick-and-roll and rejecting the screen every time. The Sixers got him involved enough on offense without asking him to do the heavy lifting, and that's the perfect situation for him.

Credit where credit is due to the other guys making his life easier. Alec Burks has started to come on for Philadelphia, and even though he didn't light things up offensively for the Sixers, he was a more willing playmaker at Wednesday night's game, and if the Sixers can trust him to ply backup point guard minutes, that helps the team both now and when (perhaps if?) Simmons returns and they get to the playoffs.

• Matisse Thybulle and Furkan Korkmaz have both been up-and-down a lot lately, so it was nice to see both of them play well on their home floor. Thybulle's active hands earned him some emphatic dunks in transition, and Korkmaz's shooting touch returned, with the Turkish wing sprinkling in some nice touch shots around the rim to supplement a couple of makes from deep.

The rotation is getting a bit crowded, and that's a good thing for Philly.

• This was a nice moment for Mike Scott:

MIKE SCOTT ARE YOU JOKING.

The poster, the taunt by Embiid and the team's sanitizer celebration to top of an incredible play. | @Wendys pic.twitter.com/gk1R0p6IHC

Didn't know he had that in him. His return to form has been

• I can't imagine more than like five people reading this care, but this is the biggest celebrity sighting at a Sixers game in a while.

I have a feeling some of you will be going to Flavortown when everyone is working from home soon. Diners, Drive-Ins, and Dives is an American staple as far as I'm concerned.

• They cruised to a win with a mostly healthy team, right now is not the time for complaints.

Things are going to get even weirder soon enough, as it appears the NBA is on the verge of transitioning to closed-door games for the foreseeable future. How the teams react to it will be interesting, particularly during a stretch of the season that is already weird enough on its own, and no one should provide more insanity for you folks sitting at home than this screwball comedy of a franchise.

If you're all following what is happening in Oklahoma City tonight, though, it seems like even that possibility is in jeopardy. Jazz players were ruled out due to illness shortly before their game against the Thunder, and a Thunder medical staffer rushed onto the floor moments before tipoff to stop a game with a packed house from happening. After some conferring with officials, teams were sent back to the locker room and the game was eventually postponed.

While the NBA has been trying to avoid cancellations and postponement, it goes without saying that a team or player getting infected would change things drastically. So I guess enjoy the hoops while they last.