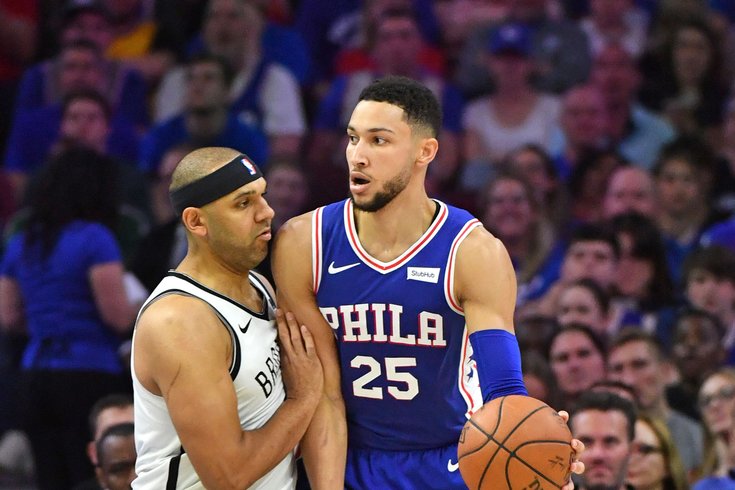 Ben Simmons and the Sixers are deadlocked in a thrilling second-round series against the Toronto Raptors, and just wrested home-court advantage by smothering an explosive Toronto offense on the road.

Jared Dudley, currently out of the playoffs, is talking to the New York Times.

In an interview with Times basketball reporter Marc Stein on Tuesday, Dudley acknowledged his role in the war of words that transpired between the Sixers and Nets after he called Simmons “average” in the half-court during a media scrum.

Simmons, for his part, averaged 19.3 points on 68.1% shooting in the four games — all Sixers wins — following Dudley’s comments.

Dudley admitted to Stein, after having some time to reflect, that he could’ve chosen his words a bit more carefully:

“Q: You took a lot of heat in the playoffs for describing Ben Simmons as an ‘average’ player in the half-court game. Any regrets?

DUDLEY: I do wish I chose different words. I was breaking down how we were going to guard him — how you try to limit someone like Ben Simmons. I was just trying to say that we would have our best success if we could get him in a half-court game.

Should I have used the word ‘average?’ Looking back on it, no. It was such a negative reaction after I said it that no one heard I also said he was elite in transition and an elite passer. But, you know, it happens. It’s the playoffs. And I understand the reaction. I understand how it goes.

Q: Did anyone with the Nets ask you to tone it down after that?

DUDLEY: When it came to the front office, no one said anything about toning it down. It was not intended to be said in a disrespectful manner. And I think I’ve earned that right in my 12 years. I’m not saying stuff to say stuff.”

It’s a pretty walk-it-back statement from someone who obviously doesn’t measure up to the player he disparaged.

That said, I think it’s fair for Dudley to point to his compliment of Simmons’ transition game. It’s also obvious that any sane person would rather defend Ben Simmons, whose game doesn’t tidily fit into the 2019 platonic ideal of basketball, in the half-court than in transition, where he is almost peerlessly deadly.

However, it’s also totally fair for Sixers fans to keep ragging on Milk Dudley until he retires, because his team was soundly and satisfyingly trounced after he said something he shouldn’t have said.