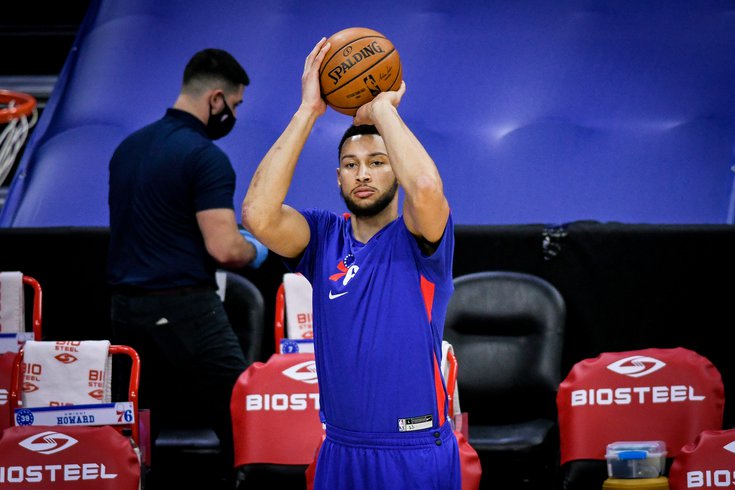 We all know how the Sixers' season ended — unceremoniously with a Game 7 loss to the Hawks in the second round — and, more importantly, the factors that led to that earlier-than-expected exit for a No. 1 seed that had its sights singularly focused on winning the franchise's first title in nearly 40 years.

There were injuries to Joel Embiid and Danny Green. There were questionable coaching decisions from Doc Rivers. There was the fact that the team really could've used a bigger deadline upgrade than George Hill. And arguably the biggest issue, the one that exaggerated all the others around it, was the disappearance of Ben Simmons, who completely folded in the spotlight and offered one of the worst stretches of his career when his team needed him most.

That's led to rampant trade speculation ever since the Sixers were bounced by the Hawks, and the biggest talking point had been around how much those postseason struggles, which exposed all of Simmons' worst qualities on the national stage, would hurt his trade value. Did it drop the Sixers from a potential Damian Lillard deal to a C.J. McCollum one? Was the recently reported offer of a Malcolm Brogdon and a first-round pick from the Pacers (which the Sixers shot down) closer to what the 24-year-old point guard is actually worth?

In other words, just how badly did Simmons screw over the Sixers with that awful run of play against Atlanta? As it turns out, it might not have been that much.

Sports Illustrated's Chris Mannix, appearing on The Bill Simmons Podcast over on The Ringer, said Simmons' value isn't as low as some think, especially since there are teams out there who still believe they can fix Simmons' shooting:

“I hear from executives all the time that are loving this ‘Ben Simmons trade value has cratered’ conversation because they hope that Philadelphia believes that. I think his trade value is actually higher than what’s being publicly portrayed. But you’re going to continue to hear a lot of the negativity around Ben Simmons.

“In other words, I think people value him pretty high across the league because I do think there’s a belief that someone’s going to figure the shooting thing out.”  [h/t nbcsports.com]

Clearly, that's a glass-half-full way of viewing the situation, and it's worth wondering where exactly that information is coming from because it's clearly from one of two places. First, we know it's not coming from rival GMs hoping to acquire Simmons, because they're not going to bargain against themselves like that. Why would they embolden the Sixers to believe Simmons is worth more than he is when they're trying to get him for as cheap as possible? As Mannix alludes to, they'd much more likely be the ones casting doubt on Simmons' ability to figure it all out.

That leaves the other two possibilities. First, it could be coming from Simmons camp because, while he reportedly didn't formally request a trade, he may still want to move on. And this could be a way to help grease the wheels for the Sixers and ensure that they get realistic offers that they'd actually consider since the Brogdon offer apparently didn't come close to what they're looking for. The other option could be that this is coming from Morey himself, for essentially the same reason. He's looking to maximize value before deciding whether or not to move on from Simmons, despite the team saying publicly that they're still committed to Simmons and helping him be the best version of himself.

The problem with that, as we've written in the past, is that Simmons also has to want to be the best version of himself. He has to commit to fixing not only his on-court game but his off-the-court perception. And the former would go a long way toward helping the latter. Would local radio stations be tweeting about Simmons being spotted at Wimbledon with his lady friend (and not spending 24/7 locked in a gym) if he finished the season on a positive note? Does that even matter in the first place?

Simmons admitted during the playoffs that much of his shooting issues were between his ears, and a simple look at some video of Simmons shooting during his Summer League games after he was drafted back that up — your muscle memory doesn't just go away overnight like that. That's the task any acquiring team will be facing, fixing something that not only doesn't have an easy fix, but something that also requires first identifying the source of the problem, which is often the most difficult part. And if it is indeed a mental block, there's no guarantee any team, no matter how hard they try, is able to fix it.

Simmons has spent past offseasons sequestered in gyms, only to come back year after year with the same deficiencies in his game. Maybe some time away is the best way for him to fix that. Maybe it's a change of scenery. Maybe it's finally time to start shooting right-handed. Maybe it's a move to power forward. Either way, rival executives thinking they can suddenly be the ones to fix Simmons after years of the Sixers trying seems overly optimistic, but maybe they know something we don't.