Is Danny Green's time with the Sixers over?

Because it shouldn't be... 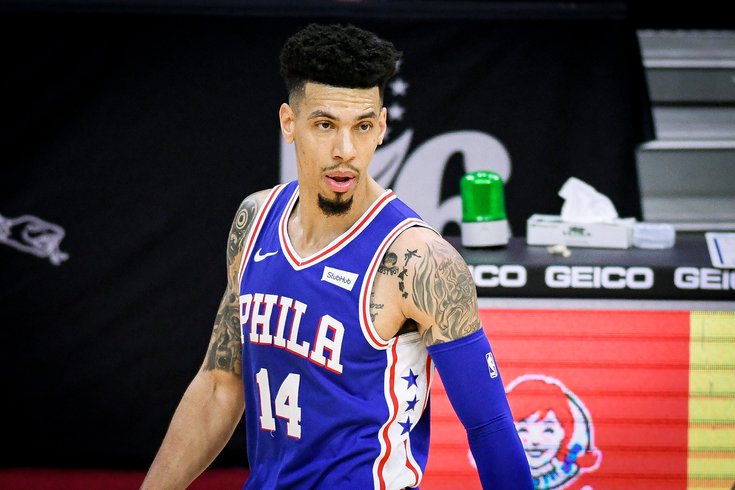 Will Danny Green be back with the Sixers next season?

The Sixers could be on the verge of an offseason of change, with the biggest potential piece on the move being point guard Ben Simmons, who capped off a down season with a poor postseason run that included a horrid second-round series against the Hawks, which Philly lost in seven games despite being a heavy favorite.

Other players will come and go, especially when it comes to pending free agents like Dwight Howard and Furkan Korkmaz. Those players will likely be easier to replace in theory — if the Sixers are even interested in an apples-to-apples swap. But after seeing their team for a full season, head coach Doc Rivers and president of basketball operations Daryl Morey may decide they didn't like how some of the complementary pieces fit around their core. And if they opt to move on from Simmons, they'll likely be making more than a few changes, as that move would have ripple effects up and down the entire roster.

However, if they keep Simmons — and probably even if they don't — you'd think that the rest of the starting five, which had some of the best numbers of any starting unit around the league, would all be likely to return. That includes the team's biggest free-agent-to-be, veteran forward/guard Danny Green. Or does it?

Here's a snippet from Keith Pompey's Inquirer.com story on Wednesday about the possibility of the Sixers trading Simmons for Blazers star Damian Lillard, with the bold emphasis being my own...

Sharpshooter Seth Curry proved he’s a starting guard in the NBA. However, he also proved this postseason that defense remains a glaring weakness.

Normally, I would just chalk something like this up to a basketball writer's opinion on the matter but because it was so contradictory to everything else I've read on the subject — not to mention what conventional wisdom would suggest. It not only stopped me dead in my tracks, but also made me wonder if there's something more to it.

To let you peak behind the curtain a bit, writers with inside information that they're not allowed to publicly disclose will sometimes mask that by presenting it as their own opinion. Or, they could do this if their information isn't solid enough to warrant reporting it as such, but they believe it to be true. Not every piece of reporting comes with the "according to sources" label. This probably happens far more than you realize. And while that doesn't mean that's the case here, it can't be ruled out.

Why? Because the idea of the Sixers letting Green just walk seems strange on the surface, especially when they hold his Early Bird Rights, meaning they can offer him quite a bit of money — probably more than anyone else would be willing to on the open market — and don't have to worry about it hurting their salary cap situation, which is a consideration for a team already in luxury tax land. And with the Sixers looking to maximize the current window with Joel Embiid, spending a bit more money (that won't hamper you long-term) to keep a valuable player around seems like sound strategy.

But there's even more of a reason to bring him back to a team that's in win-now mode. Green's contract will give Morey and Co. more flexibility around the trade deadline if they're looking to land the missing piece to a potential title team, something they failed to do in 2021 and paid the price for in the postseason.

Danny Green roughly made $15.3 million this season, so if we factor in his Early Bird Rights the Sixers could offer him a contract of anywhere up to around $26.7 million roughly. Obviously it’s extremely unlikely that Green will have any team offering him that amount, but this just goes to show you that the Sixers do have some flexibility in keeping Danny Green around if they so choose. Which is a really good thing, as he’s been a huge factor behind their team’s success and is a great role model for some of the team’s younger players.

It would also do the Sixers a lot of good to retain Green from a financial standpoint. Matching salaries can be sometimes tricky on contending teams deep into the luxury tax. Giving Green a reasonable contract, let’s say around $10 million a year, could allow the Sixers to easily match salaries in the event of a trade. You could theoretically combine Green and George Hill’s salary to match salary north of $22 million. Letting Green walk could limit the Sixers’ flexibility in trade situations.  [libertyballers.com]

So, from a financial perspective alone, it makes a ton of sense for the team to bring back Green. But that's only part of the equation. What about from a basketball/team perspective?

Green's stats weren't eye-popping in 2020-21 — 9.5 points, 3.8 rebounds, 1.7 assists on 41.2/40.5/77.5 shooting — but you could see how his absence disrupted the entire rest of the team when he was out during the postseason. There's also what he brought on the defensive end of the floor, his work against Trae Young notwithstanding. With three rings, he also brought the experience of a guy who's been there before, a voice younger players like Embiid and Simmons, who have never been past the second round of the playoffs, could lean on in crunch time.

Our own Kyle Neubeck recently took an in-depth look at what Green brought to the table last season and what he might be able to offer next season when he's 34 years old, and came away with the belief that while there's a chance Green might not be a starter for this team next year depending on what other moves they make, he's absolutely a guy the Sixers should bring back, going so far as saying it's a "no-brainer" and that this decision should be "one of the easiest" the team has to make all offseason.

That being said, Green is a reliable shooter, a good locker room guy, and a smart team player who helps teams win. Beyond his on-court value, the eventual contract the Sixers sign Green to could end up being very important in potential trade talks. [...] This feels like one of the easiest decisions of the offseason to me. As long as his price tag isn't so large as to scare ownership away, you get a deal done.  [MORE]

So bringing Green back makes sense from both a financial standpoint and as a basketball decision. We've established that. But what does his coach think of him?

"I talked to Doc, and he said, 'You know, my first initial reaction is you had a hell of a year, I appreciate everything you've done for me,'" Green said during his exit interview. "He goes, 'And you'll be back, you ain't going no-f**king-where,' so that's a good sign that they want me back."

Put all of that together and it feels incredibly odd that Pompey views Green as a guy who "probably won’t be a Sixer moving forward." Was it just a generic way to refer to a pending unrestricted free agent that perhaps went a smidge too far? Or was he trying to tell us something without actually telling us something?

What does he know that we don't?