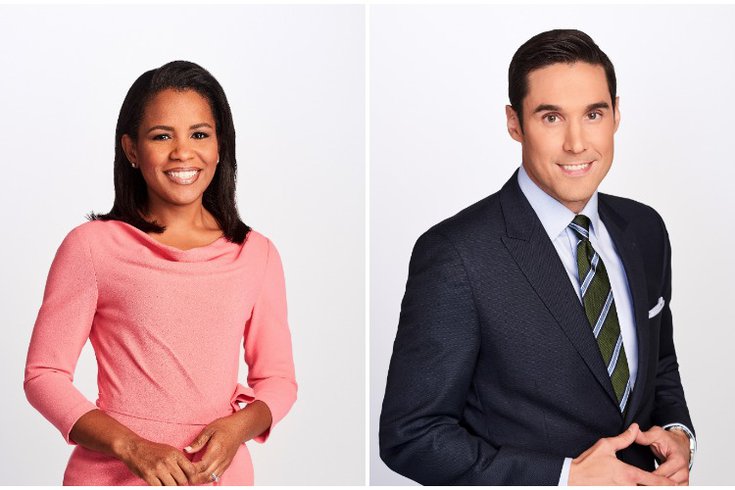 Erin Coleman and Keith Jones will make their debut as the hosts of 'NBC10 News Today' on Friday.

NBC10’s morning show is getting a new look as longtime anchor Vai Sikahema heads toward retirement at the end of the year.

The early morning show will provide a "more interactive experience" than a standard morning newscast, according to a statement released by the network.

The anchors will have an opportunity to stand or sit in various locations on set rather than just sitting behind the main desk. Augmented reality and new graphics also will be implemented to enhance storytelling.

Social media will play a more significant role. Coleman and Jones will be launching a new Instagram presence and joining viewers on Facebook to discuss the news. They also will be using social media to bring viewers into the show.

Coleman, born in Philadelphia and raised in Voorhees, Camden County, joined NBC10 in 2016. Jones, an Ocean County native and Villanova University alum, has been with the network since 2012.

Sikahema and Tracy Davidson, the current hosts of "NBC10 News Today," will be taking on new roles with the network beginning Monday.

Davidson will move to the network's 4 p.m. and 5 p.m. afternoon shows, where she will anchor alongside Jacqueline London and Jim Rosenfield.

Sikahema will work on special reports until retiring at the end of the year. He has spent 26 years with NBC10.

"Having Keith and Erin take the wheel makes me proud," Sikahema said. "They know the responsibility of what the job takes and the importance of getting the information our viewers need every morning. They know how much it means to the community because they grew up here."

Before becoming a longtime sports and news anchor, the 57-year-old Sikahema played for the Philadelphia Eagles. He retired from the NFL in 1994.

A resident of Mount Laurel, New Jersey, Sikahema has used his platform for charitable efforts to support children in need of adoption, including his weekly "Wednesday's Child" segment featuring children seeking permanent homes.

The Tonga native got his journalism education at Brigham Young University. As a journalist, Sikahema has earned two Mid-Atlantic Emmy Awards and was inducted into the Philadelphia Broadcast Pioneers' Hall of Fame in 2013, among other distinctions.