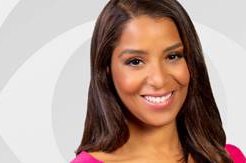 CBS3 has hired a new meteorologist, Llarisa Abreu, to take over weekday morning broadcasts in the Delaware Valley. KYW Newsradio, now at new offices along the Schuylkill River, has switched from CBS3's weather team to NBC10's First Alert weather team.

The Delaware Valley will welcome new voices and a change to local weather reports this week.

KYW-TV's CBS Eyewitness News announced Monday that Llarisa Abreu will take over weekday mornings at the station from 4:30-7 a.m.

Abreu comes to Philadelphia from San Deigo's KNSD, where she covered the state's wildfires and won an Emmy for team coverage. She got her start at Accuweather in State College and previously worked with CBS3 chief meteorologist Kate Bilo, who served as a mentor to her.

A native of North Jersey, Abreu now lives in Philadelphia.

“Professionally, I am excited to track and forecast weather where there are four seasons, and where every single day can be different," Abreu said. “Personally, it’s a homecoming for me. My mom and most of my siblings (and my adorable nieces and nephews) are nearby. I missed them!”

The announcement comes on the same day that KYW Newsradio started broadcasting from its new offices at 2400 Market Street, where SportsRadio 94WIP recently moved. Entercom, which is based in the same building, acquired CBS Radio (including KYW) in 2017.

The partnership between KYW Newsradio and NBC10/Telemundo62 will include content sharing across sister stations 96.5 TDY (WTDY-FM), 98.1 WOGL (WOGL-FM), B101.1 (WBEB-FM), SportsRadio 94WIP (WIP-FM) and Talk Radio 1210 WPHT (WPHT-AM), as well as on their websites and social media channels.

The change to NBC10's First Alert weather team means that listeners will now hear radio updates from Glenn "Hurricane" Schwartz and others.

"We’re thrilled that the region’s most experienced and innovative radio team is joining forces with the most forward-thinking team in local television," said David Yadgaroff, senior vice president and market manager of Entercom Philadelphia. "This strategic partnership will provide the Philadelphia area with the most immediate, accurate and compelling news, weather, traffic and entertainment reports."